Ethiopia’s next move on Nile dam may hinder negotiations

Ethiopia started concrete construction on the body of the Grand Ethiopian Renaissance Dam ahead of the third filling of the dam’s reservoir, amid continued stalled negotiations with Egypt and Sudan. 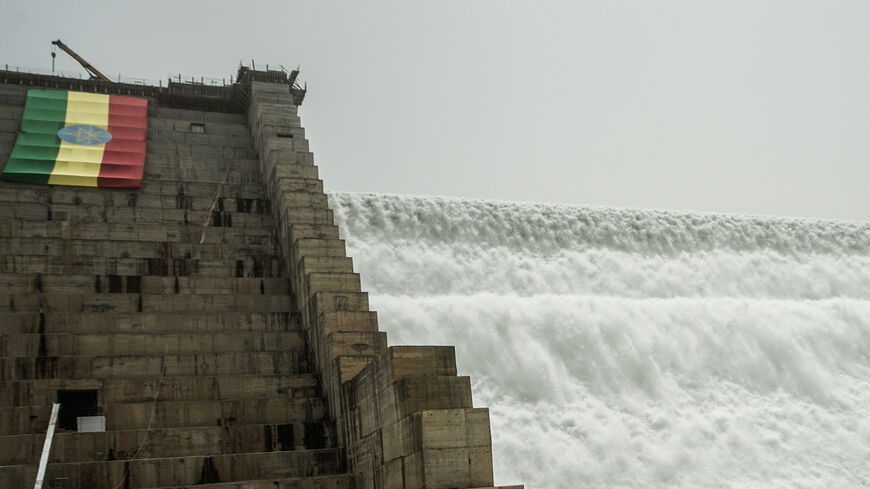 Ethiopia started concrete construction on the body of the Grand Ethiopian Renaissance Dam (GERD) in April, ahead of the third filling of the dam’s reservoir slated for July, amid the continued stalled negotiations with Egypt and Sudan.

On April 25, Egyptian media reports quoted unnamed sources and circulated satellite images as confirming that Addis Ababa started to elevate the middle corridor of the dam that is being built on the Blue Nile, after it drained this corridor in March to prepare it for new constructions.

This comes at a time when the two downstream countries — Egypt and Sudan — are demanding Addis Ababa to refrain from any unilateral measures with regard to filling or operating the dam’s lake, before concluding a binding agreement, for fear of seeing their water share of the Nile River shrink. Tripartite negotiations on this issue, held intermittently for a decade now, have so far failed.

In February, Ethiopia announced the operation of the dam’s first two turbines to generate electricity. Egypt labeled the move as yet another breach by Ethiopia of its obligations under the 2015 Declaration of Principles.

William Davison, senior analyst for Ethiopia at the Crisis Group, told Al-Monitor, “By raising the height of the GERD’s middle corridor, Ethiopia is just moving forward with the construction process it has been working on for years. There are no surprises in that.”

“The third filling of the GERD reservoir will take place during the main Ethiopian rainy season that starts in June and continues until September, according to Ethiopia’s plans. Of course the downstream countries had objected to the first and second filling of the dam’s reservoir, without reaching an agreement on the rules for such filling and operating by Addis Ababa,” Davison said.

He explained, “Ethiopia is announcing the filling for the third year. We expect Egypt and Sudan to file the same objections. They will accuse Ethiopia of acting unilaterally and violating the 2015 Declaration of Principles.”

He noted, “We can expect Ethiopia to move forward with the filling process regardless of Egypt’s and Sudan’s objections. It will claim that it is entitled to do so and refute that this violates the Declaration of Principles or any other international legal obligations. In the midst of it all, this filling should not have a significant negative impact on the negotiations between the three parties, especially since this move does not come as a surprise.”

Davison believes the political and economic conditions in the three countries will cast a shadow over the future of the stalled GERD negotiations. “I think that the internal conditions in the three disputing disputing countries will certainly affect the fate of the negotiations, amid the numerous political and economic challenges faced by their governments,” he argued. “This would likely reduce the chances of their leaders taking necessary bold decisions to make concessions to reach an agreement. But in any case, this does not mean that negotiations cannot continue.”

The GERD talks between Egypt, Ethiopia and Sudan have continued to be stalled to date, after the last round of talks held in April 2021 in Kinshasa, the capital of the Democratic Republic of Congo, failed to bring an agreement between the parties.

In September 2021, the United Nations Security Council called on the three countries to resume their negotiations under the auspices of the African Union, which since then has unsuccessfully sought to resume negotiations.

Cameron Hudson, nonresident senior fellow at the Atlantic Council’s Africa Center and former US State Department official, told Al-Monitor, “The continuation of the dam construction makes the resumption of final negotiations very difficult, as Ethiopia does not intend to delay the final construction or halt the third filling of the dam reservoir within the next few weeks.”

He noted, however, that the third filling of the dam will not end hopes for an agreement, saying, “The filling depends on rainfall. In the past two years, rainwater was abundant and this prevented undermining the water flows downstream. If rainfall continues at the same pace, there would be no reason to believe that an agreement cannot be reached between the three countries."

Hudson added that concerns are mainly due to drought years. “A drought year will heighten tensions and make reaching a final agreement more difficult,” he warned.

Egypt fears that the operation of the GERD that Addis Ababa is building on the Blue Nile will affect its water supplies from the Nile River, on which Egypt depends for 97% of its irrigation and drinking water needs.

Abbas Sharaki, professor of geology and water resources at Cairo University, concurred. “From a water point of view, the third filling will not affect Egypt and Sudan much, especially if this filling is limited, in light of rainfall exceeding forecasts,” he told Al-Monitor.

“At the political level, elevating the height of the GERD middle corridor is a continuation of the Ethiopian policy of imposing a fait accompli and taking unilateral decisions, which is strongly rejected by both Egypt and Sudan,” he said.

Sharaki noted, “Satellite images show concrete works at the present time in the GERD, as well as works that took place last month on the outskirts of the dam. Works in the middle corridor are expected to be finished before the onset of the flood in the rainy season in July.”

He pointed out that the Ethiopian government aims to raise the middle corridor to more than 20 meters (65 feet) by July, in an attempt to store around 10 billion cubic meters in the third filling. “It is facing some difficulties in implementing this move, however, due to lack of time,” he concluded. “Resuming negotiations is the only way to end the crisis between the three countries.”