Ethiopia announced it has completed the third filling of the reservoir for its controversial dam on the Blue Nile, amid harsh reactions from its neighbors. 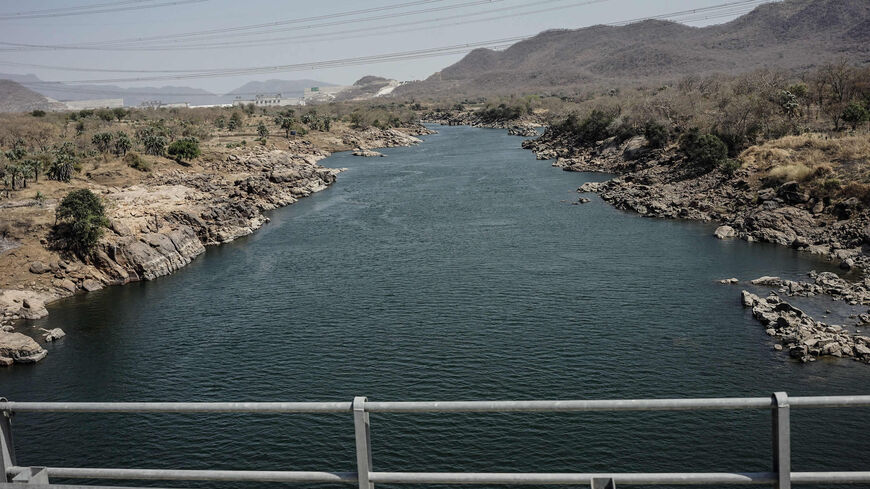 CAIRO — Ethiopia’s Prime Minister Abiy Ahmed has recently announced that his country completed the third filling of the reservoir of its controversial Grand Ethiopian Renaissance Dam (GERD) located on the Blue Nile, the main tributary of the Nile River. This move is likely to heighten tensions with the two downstream countries, Sudan and Egypt.

In a ceremony attended by senior Ethiopian officials at the GERD site Aug. 12, Ahmed said in a speech, “Today as you see behind me, the third filling is complete. Compared to last year, we have reached 600 meters [1,968 feet], which is 25 meters [82 feet] higher than the previous filling phase.”

A day earlier, Ahmed gave the green light for the operation of the dam’s second turbine, out of a total of 13 turbines installed at the GERD for the generation of 5,000 megawatts (MW) of electricity. Currently, the two turbines have a capacity to produce 750 MW of electricity.

Kifle Horo, the GERD project manager, said in a speech at the Aug. 11 ceremony launching the operation of the second turbine, “83.3% of the [GERD] project is complete [and] 95% of the civil engineering work is complete.”

He continued, “For the next 2½ years, [we will continue to work] to complete the entire dam, implement all phases of the filling process and install the remaining turbines” in order to generate electricity at full capacity from the dam.

William Davison, senior Ethiopia analyst at the International Crisis Group, told Al-Monitor, “There is nothing surprising about recent events. There have been construction delays for the GERD and there have also been delays in the filling, so it’s not like everything is going as planned, but the project is still steadily pushing forward.”

The Ethiopian announcement was met with Egyptian opposition. Egyptian member of parliament Mustafa Bakri called on “parliament to give President [Abdel Fattah] al-Sisi the authority to act based on the developments in the GERD dossier in light of the third filling and the threat it poses to Egypt’s water security.”

Addis Ababa had anticipated the Egyptian reaction by sending a letter to Cairo July 26, saying that “filling the GERD reservoir is ongoing during the current flood season.”

Egypt rejected the message and wrote to the United Nations Security Council, asking it to “interfere” after Ethiopia decided to continue to unilaterally fill the GERD reservoir. Cairo stressed that it will not tolerate any violation of its water rights and security.

In an indirect response to Egypt’s and Sudan’s criticism, Ahmed said in an Aug. 12 tweet, “We hope that Egypt and Sudan will benefit from the river, each in its own way … just as Ethiopia did. We have kept the promise of not harming anyone.”

Egypt and Sudan have repeatedly asked Ethiopia to stop filling the dam’s reservoir until reaching a binding legal agreement on the dam’s filling and operation in times of drought and prolonged drought.

Abbas Sharaki, professor of geology and water resources at Cairo University, said that the Ethiopian announcement grants Ahmed “personal victories and political gains” after the criticism his Cabinet faced in the wake of the war in the Tigray region.

At the same time, the Ethiopian move puts pressure on the Egyptian government, since “the Egyptian public is angry and dissatisfied with the state of affairs in the GERD crisis,” he said.

Sharaki expects Egypt to escalate diplomatic efforts in a bid to pressure Ethiopia, and perhaps bring the dossier back to the UN Security Council for discussion, saying the GERD issue threatens security and peace in the region.

Amani al-Taweel, director of the Africa Program at Al-Ahram Center for Political and Strategic Studies, told Al-Monitor that Ethiopia’s unilateral decisions have deepened the differences between the three countries and increased the mistrust between them in the GERD negotiations.

Negotiations between Egypt, Sudan and Ethiopia have been ongoing for a decade in a bid to reach an agreement on the operation and filling of the GERD reservoir, which Egypt perceives as an existential threat. Talks have been suspended since April 2021, after the three countries hit a dead end.

Meanwhile, several international actors have tried to mediate to resume the tripartite negotiations, including the United Arab Emirates (UAE), which hosted secret technical rounds of talks on the GERD in Abu Dhabi in June.

Sudan’s Minister of Foreign Affairs Ali al-Sadiq told Saudi Arabia’s Asharq channel July 31 that the talks in the UAE “stopped shortly before Eid al-Adha [July 8]. A date for their resumption has yet to be set … but they will definitely take place.”

In an Aug. 3 statement, the Permanent Mission of the UAE to the UN called on the three countries to carry on with their negotiations on the GERD in “good faith,” and stressed its support for the African Union (AU) and the tripartite negotiations it is sponsoring.

Taweel said, “If the UAE-brokered talks have indeed taken place, it means that they have already failed since the third filling of the dam was completed, in another unilateral move by Addis Ababa.”

She noted that Ethiopia has recently toned down its discourse on the GERD as reflected in Ahmed’s statement. “It shifted from a very hostile to a calmer discourse tending to call for negotiations and a consensus, following the negative reaction [to Ethiopia’s actions] at the regional and international levels,” she explained.

Davison said, “The parties are still struggling to agree on drought mitigation protocols and also the legal arrangements, particularly in terms of dispute resolution and whether any agreement and its terms would be subject to international arbitration, something Ethiopia has resisted.”

He added, “So there are still the same type of obstacles preventing progress toward an agreement."

A new paper published Aug. 5 at IOP Science has demonstrated that, “whilst there is a risk of water shortages in Egypt if a severe drought were to occur at the same time as the GERD reservoir is filling, there is minimal risk of additional water shortages in Egypt during the filling period if flows in the Blue Nile are normal or above average … .”

He said, “The most likely scenario is [that] the GERD will reach this elevation by 2024 or 2025. If the hydrologic conditions are normal during these next several years, there will be no shortages to Egypt’s annual release goal of 55.5 billion cubic meters."

Wheeler noted, “There is no need for deadlock. It is critical that the parties resume negotiations in good faith and with the objective of reaching a firm agreement on how to manage future droughts."

Davison concluded, “There are no new options presented to Sudan and Egypt by recent events. The situation remains much the same despite the third filling, despite the power generation and despite the latest Egyptian appeal to the UN Security Council. Instead it will be up to the parties, the African Union and the other actors, such as the UAE, United States and European Union, to try once again to work out compromises through negotiations.”