Hope for negotiations on the crisis with Egypt and Sudan is fading as Ethiopia works toward the third-stage filling of its mega dam on the Blue Nile. 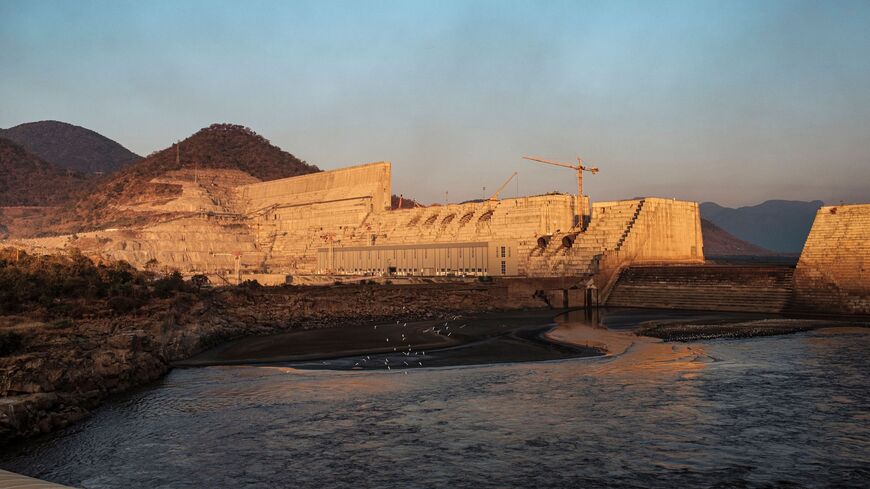 A general view of the the Grand Ethiopian Renaissance Dam (GERD), near Guba in Ethiopia, on Dec. 26, 2019. - EDUARDO SOTERAS/AFP via Getty Images

As negotiations remain stalled over the Grand Ethiopian Renaissance Dam (GERD), Ethiopia is beginning to make preparations for the third-stage filling of its mega hydroelectric dam on the Blue Nile, the main tributary of the Nile River.

Abbas Sharaki, a professor of geology and water resources at Cairo University, expects Ethiopia to begin engineering works in November in preparation for the third filling of the dam’s reservoir during the next rainy season.

He explained that a portion of the GERD will first be drained. Then, a concrete wall will be put up in February to raise the body of the dam by an additional 20 meters, so it reaches 595 meters overall, he added.

The filling process is carried out during the rainy season that runs from June until September of each year.

Sharaki added that Ethiopia will drain the middle passage of the GERD by either operating the first turbine and generating electricity or simply releasing water.

He said satellite images indicate that Addis Ababa has yet to begin construction work in preparation for the third filling.

Egypt, Sudan and Ethiopia have been involved in a bitter dispute over the GERD since Addis Ababa began building the dam a decade ago. Efforts to resolve the dispute have reached a dead end and there is fear of a military conflict erupting in the region. The African Union, which has been sponsoring the trilateral talks since June 2020, has failed to mediate a solution to end the stalemate in the negotiations. In its latest meeting in the Congolese capital Kinshasa in April, no agreement was reached on resuming the negotiations, with the three countries trading accusations of blocking the process.

On July 19, Ethiopia announced the completion of the second filling of the dam’s reservoir with enough water to generate hydroelectric power after months of diplomatic escalation, which peaked with Egyptian threats of military action should Addis Ababa go ahead with the second-stage filling.

On July 8, the UN Security Council held a meeting upon Egypt’s and Sudan’s request in an effort to resolve the dispute.

On Sept. 15, the Security Council called on the three countries to resume negotiations under AU sponsorship “to finalize expeditiously the text of mutually acceptable and binding agreement on the filling and operation of the GERD.”

Since then, the Democratic Republic of the Congo, the current AU chair, has pushed the three countries to resume negotiations, but to no avail.

Egypt and Sudan have requested that the negotiation mechanism include the United Nations, the European Union and the United States alongside the AU. But Ethiopia insists that negotiations be held under AU sponsorship alone.

Sharaki said that Ethiopia insists on operating the dam’s turbines and generating electricity without reaching an agreement with its downstream neighbors.

“The situation will further escalate if the third filling is initiated unilaterally next summer. This move may push Egypt to consider all its options, especially since the third filling aims to [add] more water than the two previous filling operations,” Sharaki said.

Speaking at a joint press conference with his Hungarian counterpart Janos Ader in Budapest Oct. 12, Egyptian President Abdel Fattah al-Sisi said that his country does not want "water to be the cause of a conflict or clash, but rather be a source of development and cooperation between countries.” He added that Egypt is only seeking to protect its annual share of the Nile River water, calling for a legal and binding agreement on the operation and filling of the GERD.

Cameron Hudson, a senior fellow at the Atlantic Council’s Africa Center, told Al-Monitor, “I don’t think there is an immediate danger now that we have entered the dry season. There is clearly a need for a new negotiation process that is serious, high level and has robust international backing.”

Fears that the dispute will erupt into a military conflict rose ahead of the second filling of the dam in July this year. But these fears faded after September, when Egyptian Foreign Minister Sameh Shoukry outlined his country’s efforts to avoid an armed conflict with Ethiopia, stressing that Egypt is committed to the negotiation process.

Ethiopia insists that the $5 billion dam, whose construction has reached 80% completion, is necessary for its economic development. But Egypt considers the GERD a serious threat to its supply of the Nile water, on which it relies almost entirely for its needs.

Sudan, meanwhile, sees some benefits from the GERD in control of the water flow of the Blue Nile and the power that will be generated. But at the same time, Khartoum seeks guarantees that the dam’s operation will be safe and will not affect its own dams, including the Roseires, Sudan's largest.

Corda Tiziana, a researcher for the Network for the Advancement of Social and Political Studies at the University of Milan, told Al-Monitor that international parties could “take a step back from pressuring Ethiopia into a binding deal after receiving evidence of the regional benefits of the GERD.”

Tiziana said, “In apparent contradiction to its harsh rhetoric about the filling operation, Sudanese companies have recently stepped up engagement with Addis Ababa to buy more electricity from it. And these actions help fuel Ethiopia’s narrative that what [it is] doing, even if unilateral, is beneficial also for its neighbors.”

She added, “This may tilt the international community away from Egypt's more confrontational positions. In this case, with weakening international support, it's hard to think Cairo will try to pursue military action against Addis Ababa.”

But doubts remain about Ethiopia’s intentions on entering negotiations with Egypt and Sudan — although Dina Mufti, the spokesperson for Ethiopia’s Foreign Ministry, said Oct. 14 that his country is ready to enter negotiations at any time.

On Oct. 10, South Sudan’s President Salva Kiir Mayardit said at a press conference with Sisi in Cairo that Ethiopian Prime Minister Abiy Ahmed had promised to begin negotiations on the GERD this month after an Ethiopian government is formed, but it has not happened.

Mayardit added, “[Ahmed] is not in a position to begin negotiations because of the war the federal government is leading against the Tigray rebels.”

The Atlantic Council's Hudson said, “Ethiopia is playing for time. I think it is also true that it is distracted by the war in Tigray and that [Ahmed] believes that if he can successfully conclude that conflict, which he thinks is backed by Egypt and Sudan, he will be in a much stronger negotiating position on the GERD when those talks start. The longer he can delay a serious negotiation, the more time he has to get the GERD operational. That leaves him in an even stronger position.”

However, Tiziana believes that Ahmed’s new cabinet may make some concessions.

She said, “Now that some opposition parties have been co-opted in the cabinet, Ahmed will have more chances to discuss with them about the content of the next GERD negotiations and try to find consensus about some minor concessions such as a temporary agreement on only the next filling — which is not something Egypt and Sudan want, but could be an acceptable compromise between the two sides in the short term.”