Egypt called for the resumption of negotiations over the disputed Grand Ethiopian Renaissance Dam as soon as possible, and warned against the stalemate in the talks. 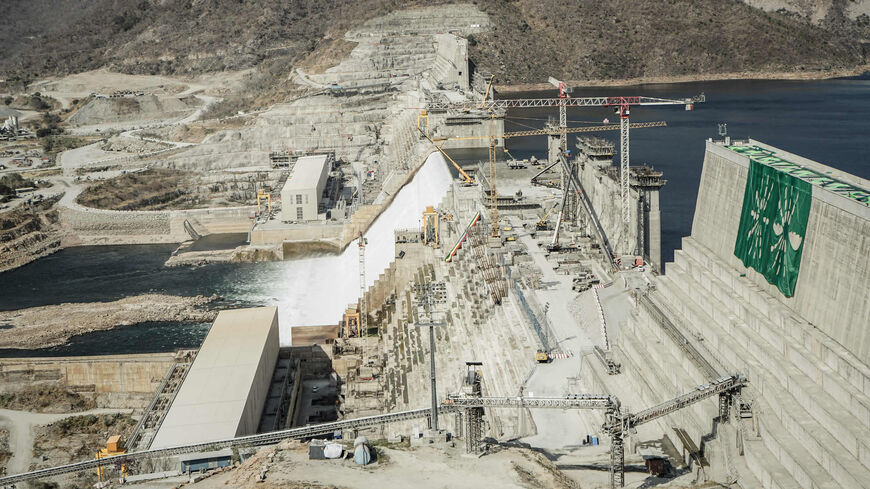 Egypt has recently renewed its call for the resumption of negotiations with Ethiopia over its controversial dam it is building on the Blue Nile, the main tributary of the Nile River, as talks have been stalled for more than a year and a half.

During his meeting with US Secretary of State Antony Blinken on the sidelines of the United Nations General Assembly meeting Sept. 20, Egyptian Foreign Minister Sameh Shoukry stressed the need to resume the tripartite negotiations on the Grand Ethiopian Renaissance Dam (GERD) as soon as possible, with the aim to reach a legal and binding agreement on filling and operating the dam in a way that would serve the interests of all parties involved and preserve Egypt’s rights to the Nile water.

In another meeting with UN Special Envoy for the Horn of Africa Hanna Tetteh in Cairo Sept. 12, Shoukry had warned against the status quo regarding the disputed dam, saying it is a factor of instability that threatens the interests of the peoples of the region and future generations.

On Aug. 12, Ethiopia announced the completion of the third filling of the GERD reservoir with 22 billion cubic meters of water. The move has deepened the crisis with Egypt and Sudan, which continue to reject any unilateral move without reaching an agreement over the dam.

In late July, Egypt had submitted a letter to the UN Security Council, expressing its categorical rejection of Ethiopia’s plans to carry on with the dam’s filling unilaterally during the rainy season since July 2020, in the absence of an agreement regulating the filling and operation of the GERD.

Egypt, Sudan and Ethiopia have been locked in a bitter decade-old dispute over the GERD, amid fears in Cairo and Khartoum that the dam would reduce their water supply from the Nile River. However, negotiations have reached a deadlock amid mounting fears of a military conflict in the already volatile region.

David Shinn, former US ambassador to Ethiopia, told Al-Monitor that a clash has not yet occurred between the downstream countries and Ethiopia because the filling of the dam’s reservoir over three years coincided with heavy seasonal rains, and thus did not cause harm to Egypt and Sudan.

Shinn said, “As long as the rains are normal or better than normal in the Nile Basin, there should be no harm to the downstream countries during future fillings of the reservoir. In this situation, it would be nice to have an understanding among the three countries, but not essential.”

Ethiopia had announced on July 19, 2021, that it had completed the filling of the dam’s reservoir for the second year in a row, with a capacity of 13.5 billion cubic meters of water, which was added to the 4.9 billion cubic meters of water it had stored during the first filling stage in July 2020. Egypt and Sudan had rejected these unilateral steps in the absence of an agreement.

In February, Ethiopia also announced the partial operation of the dam through limited electricity generation for the first time, a move that the two downstream countries also condemned and deemed as a violation of the Declaration of Principles signed by the three countries in 2015, and prohibiting any of them to take unilateral measures in the use of the Nile River’s water.

However, Shinn believes that the crisis has not yet reached its peak. He sees that there will be a problem if there are several consecutive years of very poor rains in the Nile Basin as happened in the mid-1980s. “Then it will be important to have some kind of agreement or understanding among Ethiopia, Egypt and Sudan on the amount of water that Ethiopia releases from the reservoir behind the dam,” he added.

For years, Egypt and Sudan have failed to persuade Ethiopia to agree to a legal agreement regulating the process of filling and operating the dam and operating it during drought years in which there is less rainfall, and during which the amount of water that Addis Ababa will be releasing toward the two downstream countries will be lower.

The two countries also demand an effective and binding mechanism for settling future disputes, while Ethiopia insists on an agreement that includes nonbinding guidelines.

The African Union's (AU) efforts since June 2020 to broker a deal in order to end the stalemate between the three countries have been a complete fiasco. The last round of negotiations on the GERD was held in Kinshasa in April 2021, but fell short of reaching an agreement on resuming the negotiations with each side accusing the other of obstructing the talks.

The three countries repeatedly expressed their intention to resume negotiations in a bid to settle the dispute, but there has not been apparently enough political will to overcome the differences and return to the negotiating table.

The UAE has also been active in diplomacy to settle the dispute. Abu Dhabi maintains close ties with all three countries.

Meanwhile, the international efforts to settle the dispute have declined significantly, in light of the West’s preoccupation with the Russian war on Ukraine. However, the diplomatic statements exchanged between Egypt and Ethiopia indicate that the conflict may explode at any moment, and may have repercussions on the whole region.

Riccardo Fabiani, director of projects in North Africa at the International Crisis Group, told Al-Monitor, “We are yet to see any significant progress in resuming negotiations or rebuilding confidence between the parties involved.

He said, “Egypt is frustrated toward the lack of progress on this file and trying to keep the international community's attention to this dispute high.”

In the summer of 2021, Cairo and Khartoum managed to have the GERD dispute added on the UN Security Council agenda for the second time, despite Ethiopia’s rejection. Back then, the council called on the three countries to work under the auspices of the AU on outstanding issues. Since then, the AU has been seeking to resume negotiations, but to no avail.

“It is hard to imagine how Egypt and Sudan could by now stop Ethiopia, given how advanced the construction works. But that doesn't mean the GERD is an accomplished fact,” said Fabiani.

He noted that the international pressure on Addis Ababa is still very strong, and moving ahead without making any concessions to Cairo and Khartoum could be very costly in diplomatic terms for Ethiopia.

During a meeting held between US President Joe Biden and his Egyptian counterpart Abdel Fattah al-Sisi in July, Biden expressed Washington’s support for Egypt’s water security, and stressed the importance of a diplomatic decision that would achieve the interests of all parties involved in the GERD dispute and contribute to a more peaceful and prosperous region.

The two leaders also stressed the need to conclude an agreement on the GERD without further delay.

Ethiopia believes that the GERD, the largest dam in Africa, whose construction is 80% complete at a cost of $5 billion, is important for its economic development and for the provision of energy. However, Egypt considers the GERD as a serious threat to its supply of the Nile water, on which it relies almost entirely to meet its needs of fresh water.

Sudan, which sees benefits from the dam in regulating the waters of the Blue Nile and benefiting from the electricity generated from it, is seeking guarantees regarding its safe and appropriate operation in order to preserve its dams, including the Roseires Dam, the largest of Sudan’s dams.

Fabiani believes that there is an opportunity now to resume negotiations that the three countries should exploit, saying, “The threat posed by the dispute per se is less urgent than before, given the limited impact so far recorded on Egypt’s and Sudan's water security and their relatively muted reaction to the third filling. So this window of opportunity for negotiations will not last forever and should be used to restart meaningful talks.”

However, Shinn doesn't see an early return to negotiations. “Ethiopia and Sudan are currently preoccupied with internal issues,” he said.

Sudan has been rocked by political instability since military leader Gen. Abdel Fattah al-Burhan led a coup on Oct. 25, 2021, against the civilian component of the transitional government. In Ethiopia, Prime Minister Abiy Ahmed has been facing a deepening domestic crisis in light of the Tigray war, which poses a threat to the survival of his regime.