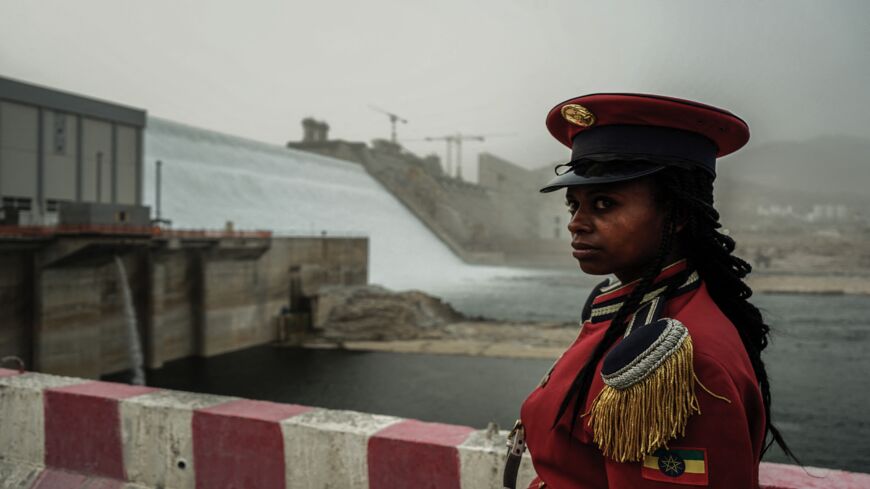 A member of the Republican March Band poses for a photo at the ceremony for the inaugural production of energy at the Grand Ethiopian Renaissance Dam in Guba, Ethiopia, on Feb. 20, 2022. Ethiopia began generating electricity from its megadam on the Blue Nile on Sunday, a milestone in the controversial multibillion dollar project. - AMANUEL SILESHI/AFP via Getty Images

It seems international momentum to solve the dispute between Egypt, Sudan and Ethiopia over Addis Ababa's start of operation of its giant and controversial hydroelectric dam is waning in light of the West's preoccupation with the Russian invasion of Ukraine.

On Feb. 20, Ethiopia announced the partial start of electricity production for the first time from the Grand Ethiopian Renaissance Dam (GERD) that it is building on the Blue Nile, the main tributary of the Nile.

The move was condemned by the two downstream countries, Egypt and Sudan, which have repeatedly denounced Ethiopia’s unilateral measures in matters related to filling and operating the dam.

The two countries described the start of power generation as a violation of the Declaration of Principles signed by the three countries in 2015, which prohibits the signatories from taking unilateral measures regarding the use of the Nile River's water.

On Feb. 21, Egypt sent a letter to the UN Security Council, rejecting Ethiopia's start of operation of the dam in the absence of a legally binding agreement with the downstream countries governing the filling and operation process.

A day earlier, the Egyptian Minister of Irrigation, Mohamed Abdel Aty, had sent the same letter to his Ethiopian and Sudanese counterparts.

Paul Sullivan, a nonresident senior fellow with the Atlantic Council’s Global Energy Center, told Al-Monitor that the Russian-Ukrainian crisis will pull the oxygen away from many other issues, including the GERD dispute.

Sullivan said, “It will be difficult to get the powers involved with this to focus back on the Nile issues. The crisis (Russia's invasion of Ukraine) is very bad timing for many issues that needed to move forward.”

In the summer of 2021, Cairo and Khartoum succeeded in putting the GERD issue on the UN Security Council agenda, despite Ethiopia's rejection of this step. Subsequently, a statement by the president of the Security Council urged the three countries to continue their talks under the auspices of the African Union (AU), which has since sought to resume negotiations, but to no avail.

Talks held under the auspices of the AU since June 2020 have failed to reach a tripartite agreement on the filling and operation of the GERD. Cairo and Khartoum demanded Addis Ababa stop filling the dam's reservoir until an agreement is reached.

The tripartite negotiations have been frozen since early April 2021, when the parties meeting in Kinshasa, the capital of the Democratic Republic of the Congo, exchanged accusations of obstructing the talks.

Alaa al-Zawahiri, a member of Egypt's negotiating committee regarding the GERD, told the Egyptian Masrawy news website on Feb. 25 that his country is considering withdrawing from the negotiations in response to Ethiopia's announcement of the start of the dam's operation.

“Ethiopia is still violating the simplest rules of transboundary rivers management. It is applying unilateral actions all the way,” said Peter Riad, a sector expert for water management in the German-Arab Chamber of Industry and Commerce in Cairo.

Riad told Al-Monitor that Ethiopians set their filling plans regardless of the annual flood degree or the downstream country’s needs.

For more than a decade, Egypt and Sudan have failed to persuade Ethiopia to agree to a legal agreement regulating the process of filling and operating the dam and its method of operation during drought years with low rainfall. This will reduce the amount of water that Addis Ababa will release toward the two downstream countries.

Egypt and Sudan also demand an effective and binding mechanism for settling future disputes, while Ethiopia insists on an agreement that includes nonbinding guidelines.

Addisu Lashitew, a nonresident fellow at the Brookings Institution, told Al-Monitor that the beginning of electricity generation from the GERD is an important milestone for Ethiopia, whose economy is currently suffering from the effects of high oil prices.

He said, “Hydroelectric dams like the GERD, however, are not water consumptive — they generate electricity by releasing water downstream.”

Ethiopia says that the $5 billion dam, whose construction is more than 80% complete and which is the largest in Africa, is vital for its economic development and for providing energy. But Egypt sees it as a serious threat to its supply of Nile water, as it depends almost entirely on it to meet its needs of fresh water.

As for Sudan — which believes the GERD could help organize the distribution of waters of the Blue Nile and which could benefit from the electricity generated from it — it wants guarantees regarding its safe and appropriate operation in order to preserve its own dams, including the Roseires Dam, the largest Sudanese dam.

Following the announcement of the start of operation of the dam, Ethiopian Prime Minister Abiy Ahmed sought to allay Egyptian and Sudanese fears of the repercussions of this step. “As you can see, this water will generate energy while flowing as it previously flowed to Sudan and Egypt,” he said, adding that his country does not want to harm any party.

However, Riad said this move means that the GERD reservoir will lose what was stored last year within two months only and it will need to be restored in the coming summer, which adds more risk for storing water in a dry or average flooding year.

He pointed out that, fortunately, in the last couple of years, Nile flows were above average.

“The Nile River historical data analysis [shows] that there are up and down cycles every successive four to seven years, so Ethiopia should put hand in hand with Sudan and Egypt for better management and cooperation,” Riad said.

While expectations of a military move by Egypt against Ethiopia regarding the GERD have recently faded, diplomatic statements between the two countries still indicate that the conflict may erupt at any moment, and its repercussions could echo across the already volatile region.

The stalled negotiations are further complicated by Ethiopia's insistence on reconsidering sharing the Nile waters. Addis Ababa wants to include this item in the GERD negotiations. Egypt and Sudan refuse.

Ethiopia's Ahmed urged the downstream countries in a speech to the Ethiopian parliament on Feb. 22 to join the Cooperative Framework Agreement (CFA), also known as the Entebbe Agreement, as it equally benefits all.

The Entebbe Agreement shifted control over the Nile River from the downstream countries to the upstream countries. It opened the door for the reallocation of water quotas among the basin countries based on their respective contributions.

Riccardo Fabiani, director of projects in North Africa at the International Crisis Group, told Al-Monitor that there is nothing indicating that an agreement is likely to be reached between parties in the coming months.

“The gap separating these countries remains as large as ever, and there is no effort to bridge this gap. With no confidence and trust between them, it's very hard to see how they could go back to negotiating and reaching a compromise,” Fabiani said.

Fabiani sees that the third filling of the GERD, which is expected to take place this summer, is more likely to become a flashpoint for a further escalation of tensions between these three countries.