The dispute over the controversial Grand Ethiopian Renaissance Dam remains unresolved between Egypt, Sudan and Ethiopia, with the latter attempting to revive the Nile water sharing agreement. 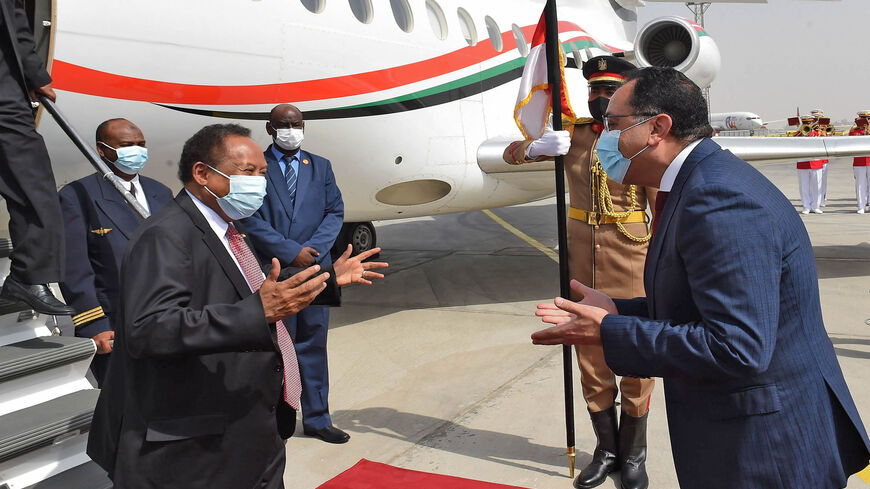 The long-running dispute over the controversial Grand Ethiopian Renaissance Dam (GERD) that Ethiopia is building on the Blue Nile, the main tributary of the Nile River, remains at a standstill despite repeated attempts to revive negotiations between Egypt, Sudan and Ethiopia.

In this context, a Sudanese diplomatic source told Al-Monitor on condition of anonymity that the GERD dispute remains complicated since Addis Ababa is not showing any political will to resume the tripartite negotiations. “[Ethiopia’s intransigence] comes despite the two downstream countries — Egypt and Sudan — expressing their readiness to return to negotiations. Meanwhile, Ethiopia's continued refusal to abide by a specific time limit for negotiations and to involve other international parties in [mediating] the dispute adds more complexity to the crisis.”

In a TV interview with Asharq News channel broadcast Aug. 29, Sudanese Prime Minister Abdalla Hamdok said his country wants to reach an agreement on the GERD dispute within the framework of international law.

Egypt and Sudan have repeatedly called for developing the negotiation mechanism by forming an international quartet led by the Democratic Republic of the Congo in its capacity as the current African Union (AU) head. The quartet would include the United Nations, the European Union and the United States. However, Addis Ababa rejected the internationalization of the crisis and insisted on holding the negotiations under the AU sponsorship only.

Egypt and Sudan, meanwhile, want to reach a legally binding agreement on the filling and operation of the dam, provided that it guarantees an efficient and binding mechanism for settling future disputes. Addis Ababa insists on an agreement that includes nonbinding guidelines.

On July 19, Ethiopia announced the completion of the second filling of the dam's reservoir with quantities enough to generate hydroelectric power. Egypt and Sudan opposed this unilateral move before reaching a legally binding agreement on filling and operating the dam.

This came months after a diplomatic escalation between the three countries, culminating in repeated Egyptian threats to carry out military action against the GERD if Addis Ababa initiated the second filling. The two downstream countries see the GERD’s filling as a threat to their national and water security.

For its part, Ethiopia insists that the $5 billion dam is crucial to its economic development and vital for the provision of energy. But Egypt sees it as a serious threat to its supply of the Nile water, on which it relies almost entirely to meet its needs of fresh water. Sudan has also concerns about the safety of the GERD and its impact on its own dams and water stations.

The AU mediation that began in June 2020 has so far failed to broker a deal to end the stalemate between the three countries. The GERD dispute ended in a deadlock amid mounting fears of a military conflict in an already volatile region. The last negotiation round held in Kinshasa in April has not resulted in an agreement to resume negotiations.

The UN Security Council also refused to assume the responsibility of solving this crisis. In a meeting convening at the request of Egypt and Sudan July 8, the council’s permanent members contented themselves with expressing support for the AU’s efforts aimed at brokering a deal over the protracted GERD conflict.

Riccardo Fabiani, director of projects in North Africa at the International Crisis Group, told Al-Monitor, “The disputing parties exchanged accusations and have escalated the dispute diplomatically and verbally. In light of such a climax, it would take some time to return to the negotiating table.”

He said, “Most importantly, a new negotiating format is needed or at least some changes must be made to the previous talks. Egypt and Sudan are unhappy with the outcome so far, but Ethiopia refused to dramatically alter the framework. This seems to be the biggest obstacle at the moment."

For Abdelmoneim Abu Idris, a Sudanese writer and political analyst specializing in the affairs of the Horn of Africa, Ethiopia has no choice but to eventually return to the negotiation table with the two downstream countries.

He told Al-Monitor that there is now plenty of time for the three countries to reach an agreement before the next filling process of the dam’s reservoir, scheduled for the upcoming rainy season in June 2022.

Abu Idris pointed out that the two downstream countries are currently pressuring Ethiopia to revive the negotiation process. “They are coordinating with Tunisia, a nonpermanent Security Council member, to revive a draft resolution it had submitted in tandem with the Security Council session on the GERD crisis in June,” he added.

The Tunisian draft resolution, which called on Addis Ababa to halt its unilateral moves and return to the negotiations to reach an agreement within six months, failed to gain the Security Council’s support. No decision or recommendation has been issued so far on this draft. But Abu Idris believes Ethiopia rejects this draft and is making diplomatic moves to prevent it from being raised again.

In a meeting with the ambassadors of the Nile Basin countries on Aug. 24, the Ethiopian Minister of State for Foreign Affairs, Redwan Hussein, condemned the Tunisia draft, saying it will only undermine efforts to resume negotiations.

Fabiani noted, “Resorting to the Security Council will lead to a dead end. Ethiopia rejects this move and the major Security Council powers — inter alia the United States and Russia — agree that this crisis should not be discussed in this context. The Tunisian move seems more symbolic than substantial and is unlikely to have a great impact on the dispute.”

Meanwhile, Algeria announced its mediation bid in the GERD dispute following a diplomatic tour to the three concerned countries by its foreign minister, Ramtane Lamamra, in late July. Its attempts to revive the negotiations have been to no avail so far.

“It is unclear if this mediation initiative will continue. We have not received any details yet, which could indicate that it has lost momentum,” Fabiani said. “It is also unclear if Algeria would bring to the table a new negotiation format or proposals that other mediators have been previously unable to offer.”

It seems that the failure to relaunch negotiations is not the only obstacle to reaching an agreement to end the GERD conflict. During his visit to Uganda Aug. 29, Ethiopian Prime Minister Abiy Ahmed called on countries that have not signed or ratified the Nile River Cooperative Framework Agreement (CFA), also known as the Entebbe Agreement, to quickly do so.

In 2010, after talks that lasted more than a decade, six Nile Basin countries — namely Ethiopia, Uganda, Kenya, Tanzania, Rwanda and Burundi — signed the CFA in Entebbe, Uganda. The agreement was, however, rejected by Egypt and Sudan as it provides for the reallocation of the Nile water quotas set in the 1959 agreement that had granted Cairo an annual quota of 55.5 billion cubic meters and Khartoum an annual quota of 18.5 billion cubic meters.

The Entebbe Agreement shifted control over the Nile River from the downstream countries to the upstream countries. It opened the door for the reallocation of water quotas among the basin countries based on their respective contributions.

Ethiopia wants to revive the issue of reallocation of the Nile water shares and to include it in the GERD negotiations, which is something Egypt and Sudan reject.

Abu Idris expressed his fear that Egypt and Sudan will run out of pressure cards to use against Ethiopia. “Their only option is to resort to influential countries to pressure Ethiopia to return to negotiations,” he said.

In a related context, he said he doubts that the United States and the European Union would succeed in pressuring Ethiopia. So far, they remain unable to pressure Addis Ababa in the conflict in the Tigray region. “Only China and Russia are left, and they seem to be siding with Ethiopia,” he concluded.