Egypt seeks to include transboundary water conflicts in international climate talks, as it has been engaged in a bitter dispute with Ethiopia over the Grand Ethiopian Renaissance Dam. 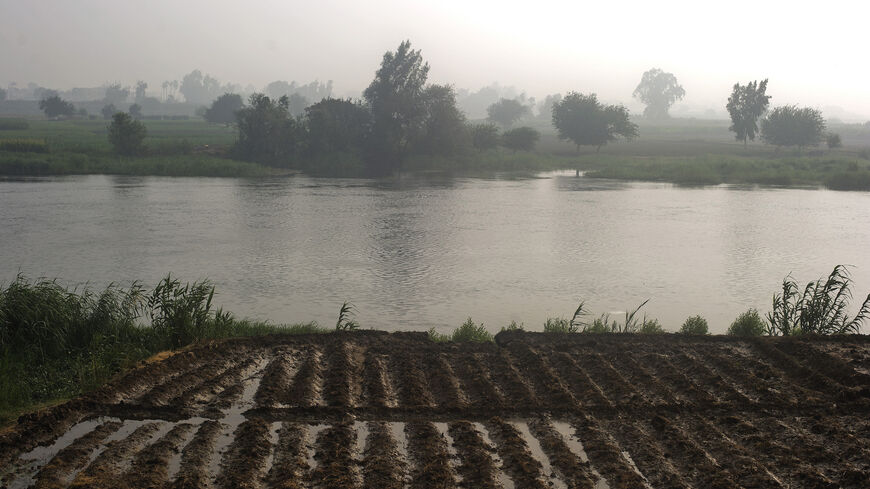 A general view taken on June 22, 2013, shows farmed fields on the banks of the Rasheed River, an offshoot of the Nile, in Cairo's northern Giza province, some 40 kilometers north of the capital. - GIANLUIGI GUERCIA/AFP via Getty Images

Egypt seeks to include transboundary water conflicts in the UN Climate Change Conference, which will be held in November in Glasgow, Scotland.

Egypt, Sudan and Ethiopia have been locked in a bitter conflict that has spanned a decade over a dam Addis Ababa is building on the Blue Nile, the main tributary of the Nile River.

In a pre-recorded speech delivered on the sidelines of the 76th Session of the United Nations General Assembly on Sept. 20, Egyptian President Abdel Fattah al-Sisi stressed the need to be serious in dealing with the construction of dams on international rivers in the absence of an agreement with downstream countries on the filling and operation mechanisms, given the risks that could help exacerbate climate change, in an indirect reference to the dispute over the Grand Ethiopian Renaissance Dam (GERD).

Sisi said fighting the building of dams on international rivers is part of the efforts deployed to adapt to climate change.

Sisi, whose country wants to host the 2022 UN Climate Change Summit on behalf of Africa, said confronting dams built on international rivers is a very important aspect of the action to fight climate change and a top priority for developing countries — especially in Africa, which suffers from the most severe climate change effects, namely water scarcity, drought, land desertification and threat to food security.

The two downstream countries (Egypt and Sudan) want a legally binding agreement on the filling and operation of the GERD, which would include an effective and binding mechanism for settling future disputes. However, Ethiopia wants a deal that includes nonbinding guidelines.

A series of technical issues have yet to be resolved between the three countries. These include the dam’s operation during drought years, which would reduce the amount of water Addis Ababa would release to Egypt and Sudan.

The GERD issue reached a deadlock amid increasing fears of a military conflict in the region. African Union (AU) efforts to broker a deal to end the impasse have repeatedly failed. The last round of talks, held in Kinshasa on April 4-5, failed as each party accused the other of obstructing the talks.

Sisi, meanwhile, warned of a major threat to the region’s security and stability amid stalled negotiations on the GERD and blamed Ethiopia for its intransigence and refusal to deal positively with the negotiations.

In a speech before the General Assembly on Sept. 21, Sisi said, “You might all be aware of the outcome of a decadelong cycle of negotiations among Egypt, Sudan and Ethiopia as a result of clear intransigence and unjustified rejection to engage positively with the negotiations process in its successive stages, and instead choosing a unilateral approach and imposing facts on the ground. This is warning of a grave threat to the security and stability of the entire region.”

Sisi stressed that “throughout history, the Nile River has always been the principal artery of life in Egypt,” saying this explains Egyptian citizens’ concerns.

Sisi said although Egypt recognizes the rights of the African brothers for development, the country has water scarcity problems and is one of the driest. He added, "Egypt is still committed to … a legally binding, balanced and comprehensive agreement on the filling and operation of the Ethiopian Renaissance Dam so as to protect the existence of 150 million Egyptians and Sudanese, and in order to avoid immeasurable damage to the resources of the two peoples.”

On July 19, Ethiopia announced the completion of the second filling of the dam’s reservoir with enough water to generate power. Egypt and Sudan rejected the unilateral move taken without reaching a legally binding agreement on the filling and operation of the dam.

The Ethiopian move came after a monthslong diplomatic escalation, which culminated in Egyptian threats of carrying out military action if Addis Ababa took the step.

The UN Security Council held a session on July 8 at the request of Egypt and Sudan in an attempt to settle the dispute. On June 29, 2020, the Security Council had discussed the GERD dispute for the first time, which coincided with the first filling of the dam’s reservoir. When it became clear that Addis Ababa intended to move forward with the second filling earlier this year, the dispute once again captured international attention.

On Sept. 15, the Security Council called on the three countries in a presidential statement to resume constructive negotiations under the AU’s umbrella “to finalize expeditiously the text of [a] mutually acceptable and binding agreement on the filling and operation of the GERD within a reasonable time frame.”

Ashok Swain, professor of peace and conflict research in the Department of Peace and Conflict Research in Uppsala University and UNESCO chair of international water cooperation, told Al-Monitor, “Large dams like the GERD are double-edged swords in the context of climate risks. The large dams, on the one hand, by flooding the forests to create reservoirs eliminate carbon sinks. The decaying plants under the reservoirs also produce greenhouse gas. Furthermore, these large dams destroy habitats, alter a river’s ecosystem and displace large populations.”

“These dams also provide renewable energy, control floods and store water for dry years. However, all these benefits can possibly be achieved from a dam situated on a transboundary river if it operates in cooperation with other riparian countries. If there are no agreements among basin countries, these upstream dams, instead of controlling floods, can contribute to more flooding and make the water scarcity situation worse in dry years,” Swain added.

Ethiopia argues that the $5 billion dam, whose construction has reached 80% completion, is important to the country's economic development and power generation. But Egypt considers the dam a serious threat to its water supply from the Nile, on which it relies almost entirely to meet its freshwater needs.

Egypt, where more than 6 million people work in the agriculture sector, says every 1 billion cubic meter drop in its share of Nile water will deny 200,000 families their main source of livelihood as they rely directly on agriculture.

Sudan sees some GERD benefits in organizing Blue Nile water and making use of the electricity it generates. Still, it wants guarantees regarding the dam’s safe and convenient operation to ensure the safety of its own dams, including the Roseires Dam, Sudan's largest.

Egypt and Sudan accuse Ethiopia of withholding or providing inaccurate information about the filling and operation of the dam.

Swain believes the downstream countries are not adequately preparing to deal with the consequences of the dam. “Large dams are not built overnight. Egypt and Sudan had at least seven to eight years to be prepared for this situation, but they didn’t.”

He added, “The fear of both countries, however, is real. Suppose the dam is not operated in cooperation and Ethiopia wants to use it as an instrument of power; in that case, it can add more water to Sudan’s floods and reduce Egypt’s water supply during the dry years. The three basin countries and the international community must work toward fulfilling the Security Council presidential statement of getting a mutually agreed binding agreement."

The Democratic Republic of the Congo (DRC), current chair of the AU, is making efforts to revive talks between the three countries. Meanwhile, Egypt and Sudan are calling for an international quartet to mediate the talks consisting of the United Nations, the European Union and the United States, along with the DRC in its capacity as the AU chair. Ethiopia insists mediation should be limited to the AU.

Swain concluded, “President Sisi taking this issue to the World Climate Change Summit doesn’t surprise anyone. It will bring some dividends politically at home but will not significantly alter the ongoing stalemate in negotiation with Ethiopia.”