Egypt is calling for the swift resumption of negotiations over the controversial Ethiopian dam, as the new US envoy to the Horn of Africa lands in Cairo for the first time since his appointment. 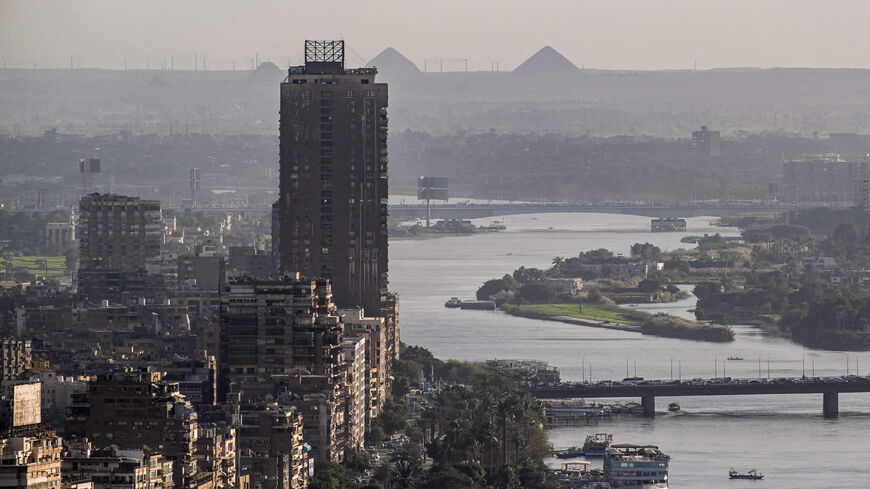 The Cairo Tower is see along the skyline of the Nile River island of Manial al-Roda (L) in Egypt's capital Cairo and its twin city of Giza (R), with the background showing (L to R): the step pyramid of Djoser, and the Bent and Red pyramids of Sneferu, Egypt. - Amir Makar/AFP via Getty Images

Egypt has recently called on Ethiopia to swiftly resume negotiations over the controversial Grand Ethiopian Renaissance Dam (GERD) in an attempt to mobilize diplomatic momentum and revive the stalled talks.

Cairo’s renewed call comes as Addis Ababa is preparing to generate electricity for the first time from the giant hydroelectric dam it is building on the Blue Nile — the main tributary of the Nile — in a move that is likely to heighten existing tensions with Egypt and Sudan.

During a meeting with US Special Envoy for the Horn of Africa David Satterfield in Cairo Jan. 25, Egyptian Foreign Minister Sameh Shoukry said that his country wants to reach a fair, balanced and legally binding agreement on the filling and operation of the GERD in a way that takes into account the interests of the three countries.

Shoukry also stressed the importance of tackling security and stability in the Horn of Africa from a comprehensive point of view that ensures the settlement of all issues.

The meeting came as part of Satterfield’s regional tour, which also includes stops in the United Arab Emirates, Turkey, Israel and Kenya. Satterfield’s first visit to Cairo is the first since his appointment to succeed Jeffrey Feltman earlier this year.

Egyptian Prime Minister Mustafa Madbouly said in a statement that Cairo wants to resume negotiations to resolve technical and legal points of disagreement and reach a balanced agreement.

Madbouly’s Jan. 25 statement came a few days after a statement was issued by his Ethiopian counterpart, Abiy Ahmed, in which he said, “Ethiopia believes that Nile waters can be developed reasonably and equitably for the benefit of all people of riparian countries, without causing significant harm.”

Ahmed continued that the GERD serves as “a good example that is demonstrative of the principle of cooperation … and holds multiple benefits for the downstream countries of Sudan and Egypt, as well as the East African region at large.”

His statement sought to ease Egyptian and Sudanese concerns over the repercussions of the GERD on their water security, but it did not present any real shift in his country’s stance on the crisis and did not suggest any road map to break the deadlock in the negotiations.

Riccardo Fabiani, North Africa project director at the International Crisis Group, told Al-Monitor that there seem to be some tentative signals coming from Egypt and Ethiopia that point toward the possibility of a resumption of the negotiations.

However, he said, “It is still unclear if anything has really changed — the conditions that have led to previous failed negotiating rounds are still the same.”

Egypt, Sudan and Ethiopia have been locked in a bitter decade-old dispute over the GERD, amid failed attempts on the part of the African Union (AU) since June 2020 to broker a deal. The latest round was held in Kinshasa, the capital of the Democratic Republic of the Congo, the current AU chair, in April 2021, and it failed to reach an agreement on relaunching negotiations, as the concerned parties traded blame for the obstruction of the talks.

Ashok Swain, professor of peace and conflict research at Uppsala University in Sweden and UNESCO chair of international water cooperation, has “serious doubts” if there is any genuine willingness on the part of Ethiopia to concede on some key contentious issues for the negotiations to succeed.

For years, Egypt and Sudan have failed to persuade Ethiopia to agree on a legal agreement regulating the process of filling and operating the dam during periods of drought, meaning the years during which Addis Ababa will release less water toward the two downstream countries. The two countries are also calling for an effective and binding mechanism for settling future disputes, while Ethiopia insists on an agreement that includes nonbinding guidelines.

Ethiopia says that the $5 billion dam, whose construction is more than 80% complete and which is considered the largest in Africa, is important for its economic development and for providing energy. But Egypt deems it as a serious threat to its Nile water supplies, on which it almost entirely depends in order to meet its fresh water needs.

Sudan finds that the dam regulates the waters of the Blue Nile and believes it can benefit from the electricity generated from it, but it wants guarantees regarding its safe and appropriate operation in order to preserve its own dams, including the Roseires Dam, the largest in Sudan.

Ahmed's keeping “an uncompromising stance” on the GERD issue supports his image as a strongman in front of his people as he fights a civil war with the Tigray rebels, Swain says.

He also believes that Ethiopia is no longer afraid of the pressures of the international community to prevent it from the unilateral building of the dam as it faces this by strengthening its relations with China and Russia.

On July 19, 2021, Ethiopia announced the completion of the second filling of the dam’s reservoir to generate hydroelectric power despite Egypt and Sudan’s rejection of the unilateral move.

The Ethiopian move came months into a diplomatic upheaval that culminated in repeated Egyptian statements  which implied the possibility of ilitary action against the dam in the event Addis Ababa embarks on such a step.

Although indications whereby Egypt will take military action against the dam have faded during the last period, the diplomatic statements exchanged between the two countries still indicate that a conflict may erupt at any moment and lead to repercussions that may affect the already volatile region.

In mid-September 2021, the UN Security Council issued a presidential statement calling on the three countries to resume negotiations under the auspices of the AU, which has since sought to resume negotiations, in vain. What further complicated matters is the unrest in Sudan and Ethiopia’s preoccupation with its civil war with the Tigray rebels.

However, Kjetil Tronvoll, professor of peace and conflict studies at Oslo New University College, told Al-Monitor that the current political situation in Ethiopia is very fragile.

Tronvoll said, “It is not likely that Abiy's government has much to give in a negotiation with Egypt and Sudan, as that will further weaken their political base.”

Meanwhile, Washington is pushing for the resumption of negotiations between the three countries to reach an agreement before the third filling of the dam’s reservoir scheduled for June. The political crisis in Sudan and the civil war in Ethiopia are a priority for Satterfield.

Tronvoll sees that Satterfield's deep knowledge and his network in the Middle East will be an advantage of trying to sway toward a negotiation process over the GERD issue.

Egyptian President Abdel Fattah al-Sisi and Algeria’s President Abdelmajid Tebboune had both stressed, during their meeting in Cairo Jan. 25, the need for all parties to show the necessary political will to move forward in the GERD negotiations.

Last year, Algeria intervened in the GERD crisis, by sending its foreign minister to the capitals of the three countries to facilitate the resumption of negotiations, but these efforts have yet to yield any results.

Fabiani pointed out that Algeria’s effort has been very low profile and discreet, and that it is difficult to tell if it has succeeded or not. “The Algerians have tried to avoid any publicity and have preferred to move below the radar,” he concluded.

About reviving Algerian mediation efforts, Swain said, “I doubt that it will have any desired effect to break the deadlock.”

Meanwhile, Fabiani emphasized that there is a good possibility of a resumption of talks in the short term. “However, it is still that now the conditions for this initiative seem to have remained unchanged: same negotiating format, same demands from the three sides, same divergences,” he added.

Fabiani concluded, “We will have to see, if talks resume, what new proposals and ideas each side will be ready to bring to the table to try and bridge the gap.”