Egypt, Sudan and Ethiopia exchange accusations over the stalled talks on the Grand Ethiopian Renaissance Dam, at a time when all parties are on alert to see whether Addis Ababa will proceed with the dam’s filling in the absence of an agreement. 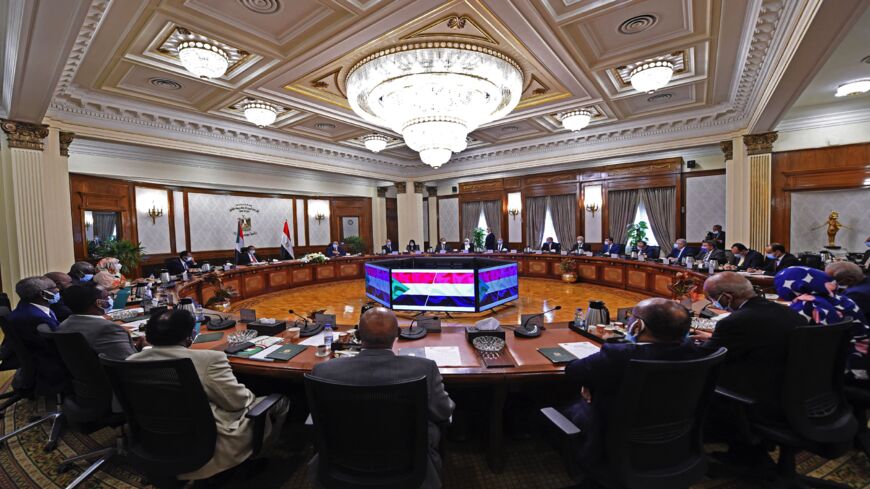 Egyptian Prime Minister Mustafa Madbouly, his Sudanese counterpart, Abdalla Hamdok, and other officials meet in the Egyptian capital, Cairo, on March 11, 2021. Sudan, Egypt and Ethiopia have been locked for almost a decade in inconclusive talks over the filling and operation of the Grand Ethiopian Renaissance Dam (GERD) on the Blue Nile, which broke ground in 2011. - SELMAN ELOTEFY/AFP via Getty Images

Ethiopia recently accused both Egypt and Sudan of politicizing the dispute over the Grand Ethiopian Renaissance Dam (GERD) and viewed that such an approach will not bring the yielded results to any of the parties.

These accusations may escalate the situation between the three parties and cast a shadow on the stalled tripartite negotiations.

Speaking at a virtual event hosted by the Ethiopian Embassy in London on April 15 with the participation of negotiators in the tripartite talks on the dam, Ethiopia's Deputy Prime Minister Demeke Mekonnen said that placing pressure on Ethiopia through a deliberate politicization and internationalization of the dispute will not have Ethiopia consent to the Nile Basin agreement signed during the colonial period.

Mekonnen added that Ethiopia will not agree on the unfair conditions that preserve Egypt and Sudan’s hegemony over the waters. He reiterated his country’s refusal of an internationalization of the dispute and called on Egypt and Sudan to adopt a constructive approach that would generate yielding results to the two countries as part of the African Union (AU)-led negotiations.

Hassan Abu Taleb, a consultant at Al-Ahram Center for Political and Strategic Studies, told Al-Monitor that Ethiopia’s refusal that the historic treaties be used as justification, under the pretext that Addis Ababa was not part of them, violates the principle of succession of states, whereby international obligations must be preserved.

Ethiopia is pushing to reconsider the countries’ historical shares of the Nile waters and to include that in the negotiations — a demand that both Egypt and Sudan oppose.

Abu Taleb added that Ethiopia wants to dodge and circumvent the idea of genuine negotiations regarding the filling and operation of the dam.

The AU’s ongoing attempts to broker a deal that would end the deadlock in the negotiations have repeatedly failed. The last round held in Kinshasa, the capital of the Democratic Republic of the Congo (DRC), on April 4-5 did not lead to an agreement to resume the negotiations, with each side accusing the other of obstructing the talks.

Egypt and Sudan are calling for an international quartet to mediate the talks, consisting of the United Nations, the European Union and the United States, alongside the DRC in its capacity as chair of the AU. However, Ethiopia insists that mediation be limited to the AU.

Ashok Swain, professor and head of the department of peace and conflict research at the Sweden-based Uppsala University, told Al-Monitor, “While there is an impasse over who will mediate, it does not stop the three countries from negotiating. It is critically important to keep talking.”

Addis Ababa plans to fill the GERD in the next rainy season in July and August with a capacity of 13.5 billion cubic meters, regardless of whether an agreement is reached.

Ethiopia announced in 2020 having unilaterally completed the initial filling of the dam with a capacity of 4.9 billion cubic meters, which angered Egypt and Sudan. The two downstream countries are trying to avoid a repetition of this scenario this year.

If Ethiopia ignores the concerns of the two downstream countries and proceeds with the second filling, Swain said that “Addis Ababa will lead to serious tension in the region and strong condemnation from the international community. This will also make it more difficult for any future negotiation to be effective.”

Egypt and Sudan seek a legally binding agreement on the filling and operation of the dam, provided that it includes an effective and binding mechanism for settling future disputes. Ethiopia, however, insists on an agreement that includes non-binding guidelines.

The outstanding technical issues mainly revolve around the GERD’s operation mechanism during drought years. Thus, the amount of water that Ethiopia will release to Egypt and Sudan will decrease.

Simultaneously, Sudan’s Prime Minister Abdalla Hamdok called on his Egyptian and Ethiopian counterparts, Mustafa Madbouly and Abiy Ahmed, respectively, to urgently meet in order to assess the negotiations and discuss possible options to move forward with the negotiations.

Cameron Hudson, senior fellow at the Atlantic Council’s Africa Center, said that diplomacy is the only way out of the current impasse. He told Al-Monitor that “a clear statement from the UN Security Council demonstrating global support and consensus for a diplomatic solution would be a start.”

Hudson added, “Followed additional outside mediation to support the AU-led process. That could include not just the US, EU or UN, but also states that Ethiopia might be more agreeable to having as mediation observers, like the UAE or Turkey.”

After the recent round of negotiations failed in Kinshasa, Egypt and Sudan rejected an Ethiopian proposal to share data on the second filling of the dam, away from the stalled negotiations. The two countries conditioned concluding a deal and sharing data accordingly.

On April 7, Egyptian President Abdel Fattah el-Sisi warned that Egypt's share of the water is untouchable and that “all options are open.” Also, on March 30, Sisi said, “No one can take a single drop of water from Egypt,” and he warned of “instability in the region no one can imagine.”

“A military option is a political decision, and the statements from Egypt and Sudan clearly show that they still keep that option open. No doubt the joining of hands between two countries has strengthened that,” Swain says.

But Hudson said, “All the parties want to find a face-saving way out of this. But all sides are going to be required to compromise. I am concerned that things get more tense before that tension is relieved, and that we will walk to the brink of war before the parties retreat. That is a very dangerous proposition."

Hudson said, warning, “Let’s not forget that Sudan and Ethiopia are already facing off on their border. That tension could quickly become a proxy fight over the dam. I would expect that sooner than a direct attack on the dam.”

“I believe that it will take the international community to restrain a more aggressive response by Egypt and Sudan. The AU will not be able to stop a war between these nations, which is why it is so important that others become involved now,” Hudson added.

Swain concluded, “In the short run, a military option might be able to fulfill some of the objectives of downstream countries. Still, in the long run, it will be self-defeating by subjecting water development projects in the basin to Ethiopia’s retaliation and pushing the region to long-running and devastating conflict and violence.”