The Democratic Republic of the Congo, the current chair of the African Union, has submitted a new initiative to resolve the ongoing dispute over the Grand Ethiopian Renaissance Dam. 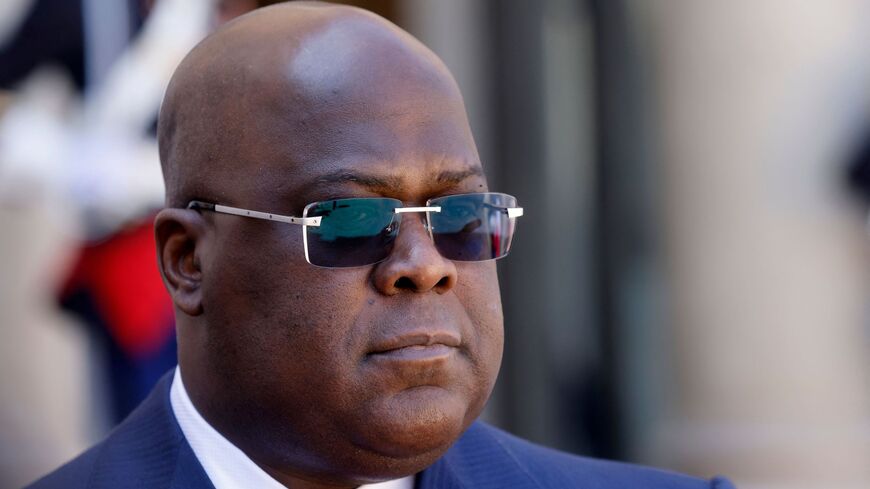 Democratic Republic of Congo President Felix Tshisekedi Tshilombo looks on at the Elysee Presidential Palace in Paris on April 27, 2021, ahead of a working lunch with the French president. - LUDOVIC MARIN/AFP via Getty Images

To revive the talks that have stalled for over a month now, Felix Tshisekedi, president of the Democratic Republic of the Congo and current chair of the African Union, presented a new initiative May 9 regarding the dispute over the Grand Ethiopian Renaissance Dam (GERD) during a tour that included Egypt, Sudan and Ethiopia.

Tshisekedi met with officials of the three countries in an effort to resume the fitful negotiations that have been spanned a decade over the dam Addis Ababa is building on the Blue Nile, the main tributary of the Nile River.

The initiative is supported by the United States and the European Union and includes a short-term initial agreement on the second filling stage of the dam's reservoir. It stipulates that Ethiopia shall provide information on the filling timelines and the volume of water flows to the two downstream countries.

Ethiopia's target filling date is drawing near with only two months left, not enough time to settle all outstanding issues.

Mansour Boulad, spokesperson for the Sudanese Ministry of Foreign Affairs, told Al-Monitor that his country is examining the Congolese president's initiative. He added that Sudan is insisting on a new negotiation methodology based on international mediation.

Egypt and Sudan are calling for an international quartet to mediate the talks consisting of the United Nations, the European Union and the United States, along with the DRC, in its capacity as the AU chair. For its part, Ethiopia insists that mediation should be limited to the African Union.

The pan-African body's efforts to broker a deal to end the impasse have repeatedly failed. The last round of talks, held in Kinshasa on April 4 and 5, went nowhere as each party accused the other of obstructing the talks.

While Egypt has yet to comment on Tshisekedi's plan, Ethiopia has voiced its support.

Ethiopian Foreign Ministry spokesperson Dina Mufti said at a press conference May 8, “We have no objection to signing a comprehensive agreement, but at the present time we want to reach an agreement on the second filling of the dam lake.”

Mufti added that talks should be restarted under the umbrella of the Entebbe Agreement, which Egypt and Sudan do not recognize. Ethiopia believes Egypt and Sudan have the lion’s share of the Nile waters under agreements that go back to the colonial era.

Ethiopia is pressuring Egypt and Sudan to include the countries' historical shares of the Nile water in the topics up for negotiation.

After the failure of the last round of negotiations in Kinshasa, Egypt and Sudan rejected an Ethiopian proposal to exchange data on the second filling of the reservoir without reaching a prior agreement.

Two water specialists who spoke to Al-Monitor, one Egyptian and the other Sudanese, rejected the proposed new initiative, saying it would allow Ethiopia to impose a fait accompli on the two downstream countries, threatening their 150 million residents.

Egyptian President Abdel Fattah al-Sisi and the head of Sudan’s ruling council, Abdel Fattah al-Burhan, have affirmed that they are adhering to a legally binding deal on the filling and operation of the disputed dam.

According to a statement by the Egyptian presidency released May 16, both leaders, who are in Paris for a Sudan-focused conference, met to discuss the dam and other regional issues, where they stressed consensus on the importance of the issue of water for both nations as a matter of national security.

On the sidelines of the same conference, the two leaders met May 17 with Ethiopian President Sahle-Work Zewde to discuss the issue.

Addis Ababa plans to fill the GERD in the next rainy season in July and August with an additional 13.5 billion cubic meters, regardless of whether an agreement is reached.

Ethiopia announced in 2020 that it had unilaterally completed the first phase of the filling to 4.9 billion cubic meters, angering Egypt and Sudan. The two downstream countries are seeking a legally binding agreement on filling and operating the dam, including an effective and binding mechanism for settling future disputes. However, Ethiopia wants a deal that includes non-binding guidelines.

The outstanding technical issues mainly concern the dam's operation during drought years, when the amount of water that Ethiopia releases to Egypt and Sudan will decrease.

Ahmed al-Mufti, a former member of Sudan’s delegation to the GERD negotiations, called the Congolese initiative disastrous and called on Sudan and Egypt to reject it.

Mufti told Al-Monitor that the argument that time is running out is invalid.

Amani al-Tawil, director of the African program at Al-Ahram Center for Strategic Studies, speaking to Al-Monitor, praised the downstream countries’ continued rejection of any partial agreement and their insistence on a comprehensive and binding agreement despite international pressure.

She said, “Ethiopia has been able to promote its vision about the dam within US think tanks thanks to support and assistance from Israel, which has a strategic interest to limit Egypt’s capabilities in the region, and the Nile water will be one of the most prominent tools in this regard.”

US special envoy for the Horn of Africa Jeffrey Feltman was on his own African tour May 4 to 13, his first since his appointment in April. Feltman held meetings with officials of the three governments as fears grow of a military escalation that could ignite the already troubled region.

Sisi holds Ethiopia responsible for the failure to reach an agreement. During his meeting with Feltman on May 5, he said that the dam issue is an existential one for his country, which will not accept its water shares or people’s interest being harmed or compromised. He called on the international community to assume responsibility for resolving the crisis and said the United States has a vital role to play in this context.

After Feltman's African tour, the US on May 14 urged the resumption of African Union-mediated negotiations between Egypt, Ethiopia and Sudan.

According to a press release, the US State Department said that "Egypt and Sudan’s concerns over water security and the safety and operation of the dam can be reconciled with Ethiopia’s development needs through substantive and results-oriented negotiations among the parties under the leadership of the AU, which must resume urgently."

“The US is committed to providing political and technical support to facilitate a successful outcome,” the statement read.

Tawil said that the United States is not according the crisis the urgency it deserves, pointing out that Feltman’s primary focus was not the GERD issue. Feltman, Tawil continued, has two other main concerns, namely the conflict in the Ethiopian Tigray region and the tensions between Sudan and Ethiopia over the disputed border region.

Mufti, the former member of the Sudanese delegation, called on the downstream states to make a counter-proposal to resume negotiations, calling on Ethiopia to postpone the second-stage filling until the conclusion of negotiations that also include compensation for Addis Ababa should it incur any material losses.