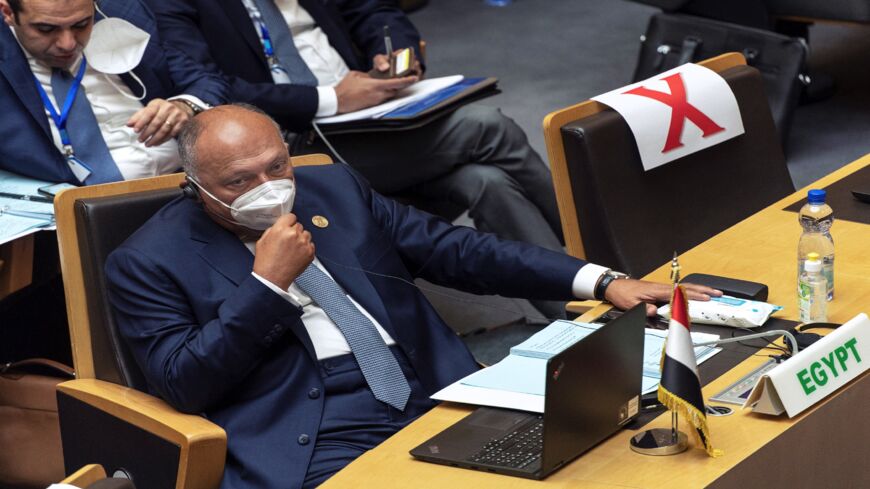 The positive signals exchanged between Egypt and Ethiopia in January did not help to overcome the two countries' existing differences let alone move toward resuming the stalled negotiations on the controversial Grand Ethiopian Renaissance Dam (GERD).

Ethiopian officials lashed out at both Egypt and Sudan, accusing the two countries once again of supporting the rebel Tigray People’s Liberation Front, which has been fighting the Ethiopian central government forces in the north of the country for more than a year now.

Ethiopian State Minister of Foreign Affairs Redwan Hussein said on Feb. 10 in a TV interview with Al Arabiya TV that “Egypt and Sudan are obtaining intelligence as well as Ethiopian public statements from the Tigray rebels.”

“There are foreign hands and Western interests seeking to tamper with the country’s security. … This has been clear to us through the GERD issue,” he added.

Hussein did not provide any evidence for his accusations but said that “what Egypt and Sudan are doing is no secret to anyone. We do not always have to provide evidence. We know everything.”

He added that Egypt and Sudan, among other foreign powers that he did not name, have a strong interest in weakening Ethiopia and having the government continuously preoccupied with internal conflicts.

The source told Al-Monitor that Egypt’s foreign policy has always been based on noninterference in the internal affairs of other countries and described these allegations as “Ethiopian prevarications” aimed at evading a solution to the GERD crisis.

Meanwhile, Sudanese Minister of Foreign Affairs-Designate Ali al-Sadiq stressed during his meeting with Ethiopia’s ambassador to Khartoum, Yeptal Amiru, on Feb. 9 that his country “never supported one party against another in Ethiopia.”

The African Union's (AU's) efforts since June 2020 to broker a deal to end the stalemate between the three countries have been a complete fiasco. The last round of negotiations on the GERD was held in Kinshasa in April 2021 but fell short of reaching an agreement on resuming the negotiations with each side accusing the other of obstructing the talks.

Democratic Republic of the Congo President Felix Tshisekedi sought during his presidency of the AU last year to push the three countries to resume negotiations, to no avail. The possibility of resuming negotiations was further complicated by the turmoil in Sudan and Ethiopia’s preoccupation with its civil war with the Tigray rebels.

The AU summit was held in early February in Addis Ababa, but the dam crisis failed to attract the attention of African leaders. This is probably why Egyptian President Abdel Fattah al-Sisi did not attend the summit and chose instead to have Foreign Minister Sameh Shoukry head the Egyptian delegation.

Martin Plaut, a senior researcher at the University of London, explained this by saying, “African leaders seldom take tough decisions at AU summits. They did not discuss the Tigray war. Instead, the African presidents got bogged down in the essentially irrelevant issue of the observer status of Israel at the AU.”

Plaut told Al-Monitor, “Their failure to tackle the Nile question was hardly surprising.”

Spokesman for the Ethiopian Ministry of Foreign Affairs Dina Mufti said on Feb. 9 that his country is not seeking to harm Egypt or Sudan and added that “Sudan’s position on the GERD serves the interest of a third party, not the Sudanese,” as he alluded to Egypt.

Cameron Hudson, a senior fellow at the Atlantic Council’s Africa Center, told Al-Monitor that there is currently no real mechanism or forum to facilitate a mediated conversation between the parties. “The AU process, started under former chair Tshisekedi, is essentially dead, and the UN process never got off the ground,” he said.

In mid-September last year, the UN Security Council issued a presidential statement calling on the three countries to resume negotiations in a constructive and cooperative manner under the auspices of the AU. But the crisis has been lingering since then.

Hussein said in his Feb. 10 interview that “the completion of the dam cannot be stopped. We will move forward regardless of the position of the downstream countries and their illogical objections. No one can obstruct the project and we shall not compromise on our rights.”

Ethiopia says that the $5 billion project, whose construction is more than 80% complete and is the largest in Africa, is essential to promote economic development and provide electricity to the vast majority of its people. But Egypt fears the project will cut into its Nile water supplies on which it depends almost entirely to meet its needs of freshwater.

Meanwhile, Sudan — which believes the dam can regulate the waters of the Blue Nile and that it can benefit from the power generated from it — is seeking guarantees regarding the dam’s safe operation in a way that preserves its own dams, including the Roseires Dam, the largest of Sudan’s dams.

Last month, Cairo expressed its intention to resume negotiations over the GERD. However, Addis Ababa simultaneously announced that it is preparing to generate power for the first time from the dam, a move that is likely to increase the existing tensions between the three parties.

Shoukry said during a meeting with US special envoy for Horn of Africa David Satterfield on Jan. 25 in Cairo that his country wanted to reach “as soon as possible” a fair, balanced and legally binding agreement on the rules for filling and operating the dam, all the while taking into account the interests of the three countries.

Shoukry’s remarks came in the wake of a statement by Ethiopian Prime Minister Abiy Ahmed in which he sought to allay Egyptian and Sudanese concerns over the repercussions of the dam on their water security. However, Ahmed failed to put forth any substantial changes in his country’s position on the crisis and fell short of proposing a roadmap to break the negotiations impasse.

On Feb. 7, Sisi said during a meeting with his Djiboutian counterpart, Ismail Guelleh, in Cairo that Egypt has the political will to settle the crisis and reach an agreement in a way that preserves regional security and stability.

In this context, Plaut said, “The dam is in place; it is being filled. Ethiopia considers this a national priority and has shown little interest in negotiating with Egypt,” he said.

Former US Ambassador to Ethiopia David Shinn told Al-Monitor that Ethiopia's Ahmed is in a stronger position today than he was immediately after the outbreak of conflict with the Tigray rebels in early November 2020.

Shinn said, “Nevertheless, the conflict in Ethiopia is unresolved, and as long as that remains the case, it will have a negative impact on Abiy’s negotiating position.”

Ethiopia is preparing to start the third stage of the dam’s reservoir filling during the upcoming rainy season, which lasts from June to September each year. But Egypt and Sudan are hoping the crisis will be settled by then.

On July 19, 2021, Ethiopia announced the completion of the second filling of the dam’s reservoir despite Egypt's and Sudan's rejection of the unilateral decision.

This Ethiopian move came after months of a diplomatic escalation that culminated in repeated Egyptian threats to take military action against the dam if Addis Ababa took this step.

Despite the recent decline in indications that Egypt will resort to military force against Ethiopia over the GERD, the diplomatic statements exchanged between the two countries still indicate that the conflict may erupt at any moment.

Shinn said that the GERD crisis continues to pose a threat to the security of the region, which is already volatile.

Ethiopian Ambassador to Sudan Yibeltal Aemero announced on Feb. 9 his country’s readiness to resume dialogue on the disputed issues with Khartoum.

He stressed that there are positive developments between the two countries on the GERD and the border dispute, without adding further details.

Besides the dam dispute, tensions escalated between Sudan and Ethiopia after border clashes between the two sides erupted in November 2020, during which the Sudanese army expelled thousands of Ethiopian farmers from al-Fashqa area and reclaimed disputed lands.

Hudson said, “It would not surprise me at all to see Khartoum take serious steps to try to resolve the GERD and al-Fashqa issues with Ethiopia as a way of demonstrating to internal and external audiences that military rule in Sudan can and does deliver peace and stability.”

Hudson expected that Egypt would not be excluded from any possible deal between the two countries. “Cairo cannot be left out of the equation, but I do expect to see a rapprochement between Ethiopia and Sudan and perhaps efforts to bring Egypt around by them.”