Ethiopia plans to export electric power to South Sudan as part of an electrical interconnection project between the two countries, as negotiations with Sudan and Egypt on Ethiopia’s controversial dam on the Nile River are at a dead end. 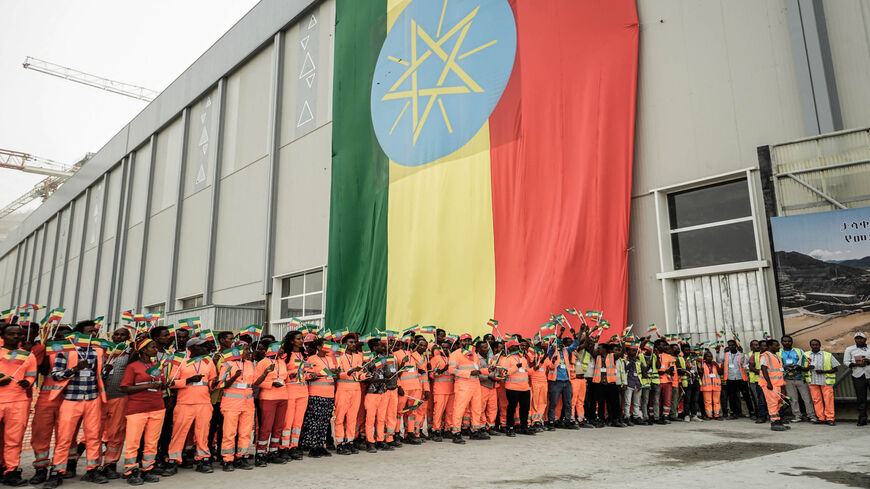 As the dispute over the giant hydroelectric dam that Ethiopia is building on the Nile River continues to linger, Addis Ababa recently unveiled plans to export electric power to South Sudan as part of an electrical interconnection project between the two countries.

According to the Ethiopian News Agency, Addis Ababa is to start exporting 100 megawatts (MW) of electric power to South Sudan in the first phase of the project and gradually increase it to 400 MW over the next three years.

The announcement of the deal came on the sidelines of the signing May 5 of a memorandum of understanding between officials of the two countries regarding an electrical interconnection project, during an official visit by a delegation from South Sudan to Ethiopia.

Ethiopian Electric Power Corporate Planning Executive Officer Andualem Sia said after his meeting with the South Sudanese delegation that his country is working to provide electric power to its neighbors with the aim of earning foreign currency, as well as meeting the energy requirements of its neighbor South Sudan.

South Sudanese Minister of Energy and Dams Peter Marcello said during his visit to Ethiopia that the memorandum signed by the two parties will help accelerate the process of establishing the necessary infrastructure to import electric power from Ethiopia.

He noted that electric power is the backbone of the economy and that the energy that will be imported from Ethiopia will help his country swiftly implement its development projects.

The memorandum was signed by Ethiopian Minister of Water and Energy Habtamu Itefa and Marcello during a ceremony held in the Ethiopian capital, Addis Ababa.

According to the memorandum, the energy interconnection project between the two countries will be implemented in two phases. In the first phase a 357-kilometer (222-mile) transmission line is constructed from the two substations in the Ethiopian city of Gambela to the city of Malakal in South Sudan, and in the second phase a 700-kilometer (435-mile) transmission line is built from Didessa in Ethiopia to the South Sudanese capital of Juba.

Ethiopia and South Sudan have yet to announce the value of the electricity export deal.

However, according to Sia, Ethiopia earns about $50 million annually from exporting electricity to neighboring countries, including Sudan and Djibouti. He said that Addis Ababa is also seeking to intensify efforts to earn $400 million over the next 10 years.

He noted that his country earned $37 million over the past nine months thanks to its energy supply, an increase of 7% compared to last year.

Addisu Lashitew, nonresident fellow at the Brookings Institution, told Al-Monitor that Ethiopia is currently going through a severe economic crisis, which has led to an alarming increase in inflation and unemployment following a year and half of brutal civil war in Tigray.

He said that the country is also experiencing a severe foreign currency shortage because of the coronavirus pandemic that disrupted tourism and international trade, in addition to the US decision to exclude Ethiopia from a duty-free trade program (AGOA) over human rights violations perpetrated by the Ethiopian government forces in the Tigray region.

However, Lashitew believes that revenues from electric power exports to South Sudan are likely too small to make a huge impact, but they could make marginal contributions toward stabilizing the country’s balance of payment problems.

In March, Itefa said that his country is planning to export roughly 2,000 MW of electric power to neighboring countries in a bid to benefit from Ethiopia’s water potential.

Ethiopia is seeking to become a leader in electricity production in the African continent, as it is building the Grand Ethiopian Renaissance Dam (GERD) on the Blue Nile, the main tributary of the Nile, with a capacity of 6,000 MW at a cost of $5 billion.

Egypt and Sudan as well as Ethiopia have been locked in a bitter decade-old dispute over the GERD. The case has reached a deadlock amid mounting fears of a military conflict in the already volatile region.

Egypt and Sudan have repeatedly failed to persuade Ethiopia to agree to a legal agreement regulating the process of filling and operating the dam and its method of operation during drought years in which there is less rainfall. Consequently, the amount of water that Addis Ababa will release toward the downstream countries will decrease.

Ashok Swain, professor of peace and conflict research at Uppsala University in Sweden and UNESCO chair of international water cooperation, told Al-Monitor that Ethiopia's goal in exporting electricity to South Sudan is to get as many allies as possible in the region to support its unilateral construction of the GERD and fill up the dam.

He said that Ethiopia hopes to make South Sudan a stakeholder in the GERD file so that it is not alone in its dispute with Egypt and Sudan.

Swain said, “When the solution to the GERD dispute asks for a multilateral approach between three riparian countries of the Blue Nile, Ethiopia again unilaterally goes ahead and makes a deal and brings in a new actor to this highly volatile negotiation.”

He added, “Only a couple of months are left for the third filling of the dam reservoir, and there is still no deal among the riparian countries. South Sudan's inclusion is only going to make the negotiation more complicated.”

Ethiopia intends to fill the GERD for the third time in the rainy season this year, which started in July, despite the faltering negotiations with Egypt and Sudan, both of which fear that the dam project will adversely affect the flow of the Nile River waters.

In February, Ethiopia also announced the partial operation of the dam through limited electricity generation for the first time, a move that the two downstream countries also condemned and deemed as a violation of the Declaration of Principles agreement signed by the three countries in 2015 and prohibiting any of them to take unilateral measures in the use of the river’s water.

However, Lashitew believes that Ethiopia's supply of electricity to South Sudan will not affect the GERD negotiations. He said, “The total power export to South Sudan will be less than 8% of the GERD’s total generating capacity. Negotiations [over the GERD] are not in a good place right now, but I doubt that this development will make things worse.”

He added, “A peaceful outcome for a shared and fair utilization of the Nile is crucial for regional stability and economic integration.”

The African Union’s (AU) repeated attempts to solve the dispute over the GERD have failed since June 2020 to broker a deal to end the stalemate in negotiations between the three countries, its last round taking place in Kinshasa, the capital of the Democratic Republic of Congo, in April 2021, which did not lead to an agreement on resuming the negotiations. The parties subsequently traded blame for the obstruction of the talks.

Last summer, Cairo and Khartoum managed to push toward the inclusion of the dam issue on the agenda of the United Nations Security Council, despite Addis Ababa’s rejection of this step. Subsequently, the Security Council issued a presidential statement calling on the three countries to resume their talks under the auspices of the AU, which has since sought to resume negotiations, to no avail.

However, Egypt and Sudan still hope to resume the faltering negotiations with Ethiopia before it begins filling the dam’s reservoir for the third time.

However, Swain is not optimistic about the success of a negotiated deal before the filling starts this year. He said, “Political uncertainty in Sudan and the West's focus on Ukraine has given additional free space to Ethiopia to continue its unilateral filling of the GERD reservoir.”