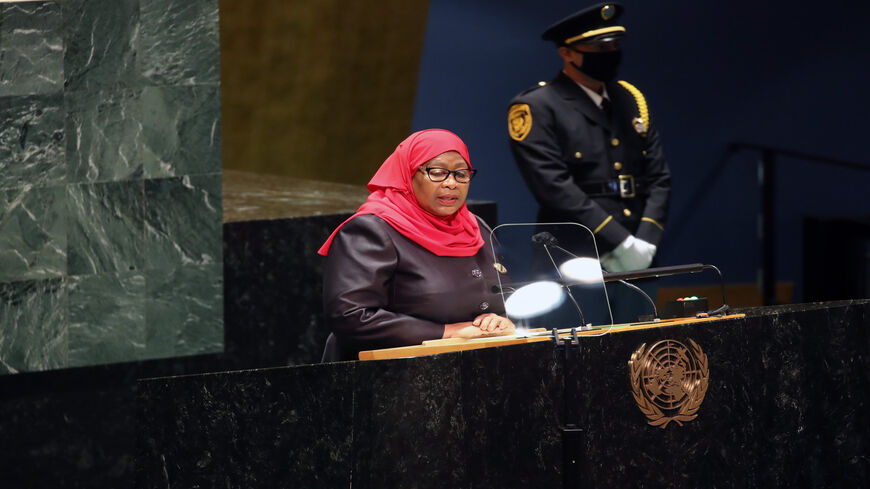 Egypt and Tanzania agreed to intensify coordination on the controversial Grand Ethiopian Renaissance Dam (GERD) that Ethiopia is building on the Blue Nile, the main Nile tributary.

This was reached Nov. 10 when Egyptian President Abdel Fattah al-Sisi hosted his Tanzanian counterpart, Samia Hassan, in Cairo, in her first visit to Egypt since her inauguration as president of Tanzania last March.

Sisi asserted his country is looking forward to reaching a legal, binding and fair agreement on filling and operating the GERD with Ethiopia based on the rules of international law and the resolutions of the UN Security Council, “away from any unilateral approach aimed to impose a fait accompli and disregard the basic rights of people."

In a joint press conference with Hassan following bilateral talks, Sisi affirmed that water is a matter of national security for his country, stressing Egypt's insistence on its water rights.

Sisi said that reaching an agreement on the GERD would foster security and stability in the region, achieve the joint interests of all parties and open cooperation horizons between the Nile Basin countries.

The two heads of state also discussed other issues including boosting economic and development cooperation between their two countries, according to a statement by the Egyptian presidency.

Egypt, Sudan and Ethiopia have been locked in a bitter decade-old dispute over the GERD. All efforts to resolve the dispute have reached a deadlock amid mounting fears of a military conflict in the already volatile region.

Egypt and Sudan fear the GERD would limit their Nile River water supply, on which they rely for fulfilling most of their water needs.

Mohammed Soliman, a scholar at the Middle East Institute in Washington told Al-Monitor that strengthening bilateral ties between Egypt and Tanzania, a key player in East Africa, builds momentum for Cairo's demands for a binding agreement on the Nile.

Soliman said, “Egypt is one of Tanzania’s top economic partners, and currently Cairo is building the Julius Nyerere hydropower dam in Tanzania, which is one of the largest national projects in Tanzania. Egypt wants to demonstrate its sincere intentions and constructive efforts to assist other African countries in achieving their development goals.”

During the press conference with Hassan, Sisi said that the Julius Nyerere dam is a “symbol of friendship and cooperation” between the two countries. “The project is an example of Egypt's support for the rights of the Nile Basin countries in the optimal use of their water resources in a way that does not negatively affect other countries,” he added.

In December 2018, the Arab Contractors Company and El Sewedy Electric Company won the tender for building the dam, which is located in the Morogoro area on the Rufiji River, at a cost of approximately $3 billion. The dam is expected to be fully opened in 2022.

Egypt believes boosting its ties with Tanzania, a Nile Basin country, could thwart Ethiopian efforts to reconsider the distribution of Nile water shares. Addis Ababa wants to include the shares redistribution in the GERD negotiations, which Egypt and Sudan reject.

After talks that lasted more than 10 years, Tanzania signed, along with Ethiopia, Uganda, Kenya, Rwanda and Burundi in May 2010 the Cooperative Framework Agreement for the Nile Basin Countries — known as the Entebbe Agreement. Under the agreement, the historical water shares of Egypt and Sudan are limited at 55.5 billion and 18.5 billion cubic meters, respectively, according to the agreements of 1929 and 1959. Egypt and Sudan did not recognize this agreement.

During his visit to Uganda Aug. 29, Ethiopian Prime Minister Abiy Ahmed called on countries that have not signed or ratified the Entebbe Agreement to do so quickly.

The Entebbe Agreement transfers influence over the Nile River from the downstream countries — Egypt and Sudan — to the upstream countries. It opened the door to redistributing water shares among the basin countries pro-rata their respective contributions.

The Nile River consists of two main tributaries. The White Nile originates from Lake Victoria, which touches Uganda, Tanzania and Kenya. The Blue Nile begins at Lake Tana in Ethiopia and flows into Khartoum in Sudan and from there to Egypt.

Cairo has long been intensifying its movements among the Nile Basin upstream countries to mobilize support in its favor in the GERD issue and to preserve its shares of the Nile waters.

Soliman said that Egypt's outreach is mostly focused on restablishing strong bilateral relations with nations in the Nile Basin, East Africa and the Horn of Africa to position itself as an African power and strengthen its position in the Nile negotiations.

Meanwhile, the continuous attempts of the African Union since June 2020 have failed to broker a deal to end the stalemate in the GERD negotiations. In the last round of negotiations in Kinshasa in April, the Democratic Republic of the Congo (DRC) did not revive the talks. The parties rather exchanged accusations of obstructing the talks.

On July 19, Ethiopia announced the completion of the second filling of the dam's reservoir, enough to generate hydroelectric power, despite Egypt and Sudan's rejection of this unilateral move.

The Ethiopian move came months after a diplomatic escalation that culminated in repeated Egyptian threats to carry out military action against the dam if Addis Ababa took this step.

In mid-September, a statement by the president of the Security Council called upon the three disputing countries “to take forward the AU-led negotiation process in a constructive and cooperative manner [in order] to finalize expeditiously the text of the mutually acceptable and binding agreement on the filling and operation of the GERD, within a reasonable time frame.”

Since then, the DRC, the current chair of the African Union, has sought to push the three countries to resume negotiations, but to no avail.

On Nov. 8, Egypt's Foreign Minister Sameh Shoukry called for resuming negotiations "as soon as possible.” This came in a statement by the Foreign Ministry, following a meeting between Shoukry and US Secretary of State Antony Blinken in Washington.

In a joint statement between Egypt and the United States that followed the US-Egypt strategic dialogue Nov.  8-9, Washington renewed its support for Egypt's water security. Both countries called for resuming negotiations to reach an agreement on the GERD under the auspices of the AU.

Meanwhile, Sudan is facing internal turmoil after the Sudanese army carried out a military coup to undermine the democratic transition process in the country. This prompted the AU to suspend Sudan's membership and freeze its participation in the union's activities.

In the meantime, Ethiopia is accused of pushing for freezing Sudan's AU membership in a bid to create a logical reason it may invoke before the international community to postpone the GERD negotiations in order to fully focus on the war in the Tigray region, which has become a threat to the survival of the regime of Prime Minister Ahmed himself.

“The Nile negotiations remain on hold as a result of political uncertainties in Sudan and Ethiopia, and this is unlikely to change soon," Soliman concluded.