What does Egypt have to gain from building a dam in Tanzania? 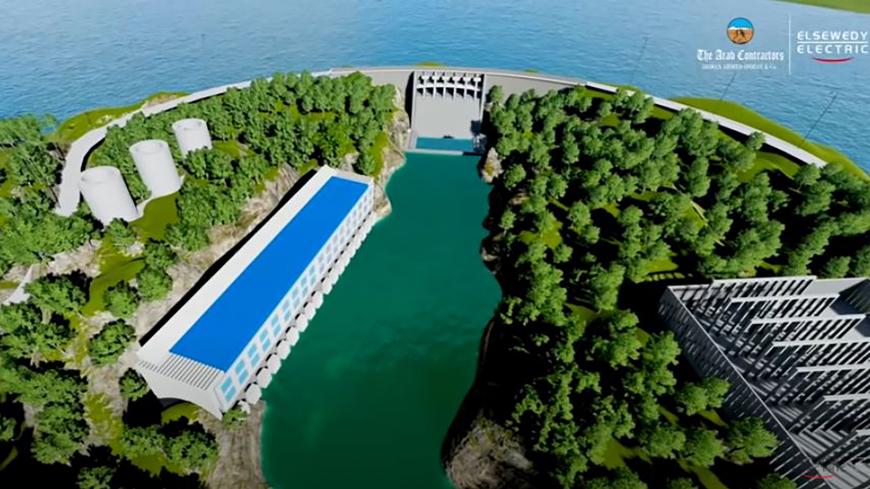 Still image of the Julius Nyerere hydropower station, from a video uploaded on Jan. 20, 2020. - YouTube/Elsewedy Electric

CAIRO — Egyptian Prime Minister Mustafa Madbouly said in a press statement Sept. 4 that President Abdel Fattah al-Sisi tasked the government to complete the construction of the Julius Nyerere dam and hydropower station in Tanzania to "the highest quality."

Madbouly noted that Sisi demanded that the dam's construction is of the highest quality in order to reflect the ability of the Egyptian contracting sector to implement huge projects.

In January 2018, Egypt and Tanzania signed a contract to establish a dam on the Rufiji River in Tanzania, which aims at generating electric power to supply Tanzania’s power needs, in addition to controlling the water quantities during flood periods and providing the Tanzanian state’s water needs.

The Julius Nyerere dam is among the largest hydroelectric dams in the East Africa region. The project is being implemented at a cost of $2.9 billion through a partnership between the Tanzania Electric Supply Company (TANESCO) and two of the largest Egyptian companies in the construction sector — Arab Contractors and El-Sewedy Electric. The two Egyptian companies won the tender that several multinational companies bid on. The building of the dam aims to encourage the implementation of other projects between the two countries in the fields of electricity and renewable energy.

The project includes the construction of the concrete part of the main dam, in addition to four complementary dams that form the water reservoir with a capacity of 33 billion cubic meters, in addition to a hydroelectric power generation station with an output of 2,115 megawatts. The two partnering Egyptian companies began construction in mid-2019, and the project is scheduled to be complete by 2022.

Hani Raslan, founder of the Nile Basin studies department at Al-Ahram Center for Political and Strategic Studies, told Al-Monitor over the phone that building the Julius Nyerere dam and hydropower station will boost Egypt’s presence in Tanzania, which is one of the Nile Basin countries that Egypt seeks to cement ties with.

He said that implementing such a huge project constitutes a powerful work precedent in Africa, and it helps Egypt to reclaim its soft power in the continent. He noted that Egypt has skills and experience allowing it to implement a project of this magnitude.

Raslan noted that Egypt’s real gain out of building the dam is to strengthen its relations with Tanzania, in the framework of its plan to support African countries.

Egypt and Tanzania have had strong ties since Tanzania was formally formed in 1964, and diplomatic relations between the two countries were established, according to Egypt's State Information Service.

On the political level, Tanzania has expressed its support for the June 30, 2013, revolution that opposed the Muslim Brotherhood’s rule. Tanzania, represented by then-Foreign Minister Bernard Membe, also participated in Sisi’s inauguration ceremony in June 2014, while Sisi’s visit to Tanzania in August 2017 constituted a turning point in their relations, as it was the first visit of an Egyptian official since 1967. The two countries agreed to cooperate to fight terrorism and corruption during that visit, according to the State Information Service.

May Mahmoud, member of the parliamentary Committee for African Affairs, told Al-Monitor over the phone, “Egypt is not expecting any benefits from the Julius Nyerere dam and station in Tanzania. Its main goal [throughout the project] is to help achieve development in Africa.”

She said that Egypt’s implementation of the dam is part of Sisi’s plan to boost Egypt’s role in Africa and achieve development on the continent.

Egypt attributes special importance to Africa since it assumed the presidency of the African Union in 2019 for one year. It launched an initiative to treat 1 million Africans for hepatitis C on March 17, and, even after its term ended, it sent medical aid to African countries amid the outbreak of the coronavirus pandemic.

Mahmoud noted that the Arab Contractors and El-Sewedy Electric have a long history in the implementation of major construction, power and energy projects inside and outside Egypt. She added that this has helped Egypt to handle the construction of the dam, noting that the project does not constitute a financial burden for Egypt.

Sisi’s instructions to complete the construction of Julius Nyerere dam and hydropower station coincide with the stalled negotiations between Egypt and Sudan (the Nile River downstream countries) and Ethiopia (the Nile River upstream country) over the Grand Ethiopian Renaissance Dam (GERD), which Addis Ababa started building on the Blue Nile River in 2011. Ethiopia considers the dam a crucial project for achieving economic development. Egypt, for its part, fears the GERD will affect its share of the Nile River, which supplies Egypt with more than 95% of its potable water and irrigation needs.

The director of the Arab Contractors’s board, Mohsen Salah, said in a phone intervention on “Aala Masouliyati” show on Sada al-Balad satellite channel in October 2018, following the company’s selection to implement the project, that the dam is not connected to the Nile River flow or the water coming to Egypt. It is built on the Rufiji River in Tanzania, and the purpose is to help achieve development and boost the infrastructure of Tanzania and Egypt’s presence in Africa, he explained.

Abbas Sharaqi, professor of geology and water resources at the University of Cairo, said in a Sept. 5 press statement to Mustaqbal Watan News that the Julius Nyerere dam is a powerful test that Egypt succeeded in at the technical and construction levels. The utmost goal is not related to investment, but rather cooperation and integration between the two countries. He noted that the project will be revolutionary for Tanzania by allowing it to control the flood water and rely on organized agriculture through storing water yearly, in addition to producing an amount of electricity equal to that generated from the High Dam.