As the crisis over Ethiopia’s controversial dam on the Nile River worsens, Egypt considers expediting the construction of the Stiegler’s Gorge dam on the Rufiji River in Tanzania. 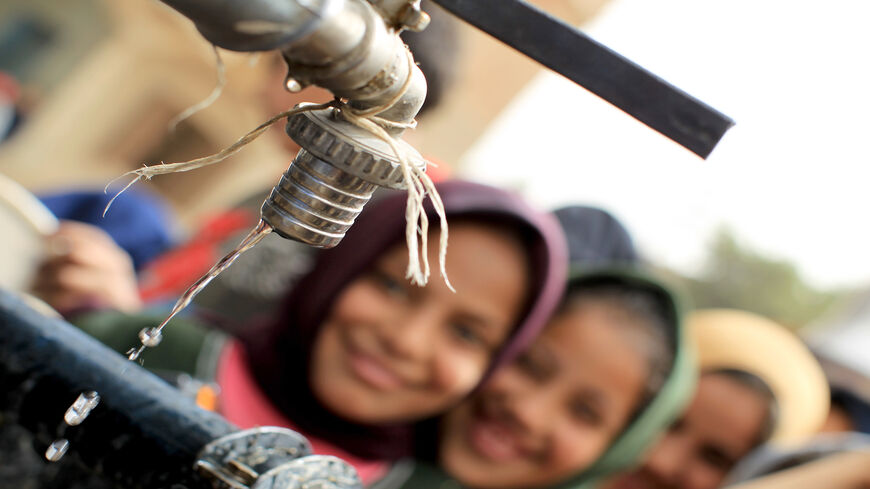 Egyptian girls stand in line at a water cistern to fill their containers with clean water at al-Rahawe village, some 40 kilometers (25 miles) northeast of Cairo, Egypt, May 27, 2010. - Khaled Desouki/AFP via Getty Images

CAIRO — Egypt is working to build the Stiegler’s Gorge dam on the Rufiji River in Tanzania, at a time when the Grand Ethiopian Renaissance Dam (GERD) crisis between Ethiopia and two downstream countries — Egypt and Sudan — reached a turning point. Secretary-General of the League of the Arab States Ahmed Aboul Gheit said in a TV interview June 20 that the next step for Egypt and Sudan is to file a complaint against Ethiopia before the UN Security Council through Tunisia, the state representing the Arab countries in the council.

On June 12, Tanzanian Minister of Investment Geoffrey Mwambe said in a press statement on the sidelines of the forum for the heads of African investment authorities in Sharm el-Sheikh that Egyptian companies have started implementing the Stiegler’s Gorge dam project on the Rufiji River.

Mwambe noted that Egypt is one of Tanzania’s top 10 economic partners as both countries have agreed on several major projects and started implementing some, such as the Stiegler’s Gorge dam project and the Julius Nyerere Hydropower Station attached to it.

A few days prior to these statements, Egyptian President Abdel Fattah al-Sisi called his Tanzanian counterpart, Samia Suhulu Hassan. According to a June 9 Egyptian presidency press statement, Hassan spoke about the existence of broad prospects for developing relations between Egypt and Tanzania, praising the Egyptian support for Tanzanian development efforts, especially through the construction of the Stiegler’s Gorge dam and the Julius Nyerere Hydropower Station, which are the largest national projects in Tanzania.

In November 2020, Abbas Sharaki, professor of water resources at Cairo University, said in a press statement that the Stiegler’s Gorge dam is of particular interest to Tanzania on the one hand, as its production will cover the increasing demand for electricity in Tanzania as it receives more foreign direct investments that require more energy. On the other hand, he noted, Tanzania will enter the energy exporters' club by selling the surplus electricity production from the dam and the station to East African countries.

Sharaki noted that the dam will protect the Tanzanian people from the repeated losses annually due to the floods.

Meanwhile, the two Egyptian companies involved in building the dam and the station — the Arab Contractors and Elsewedy Electric — will achieve huge profits since these are two of the largest projects in Africa, whose cost is initially estimated at about $2.9 billion.

However, many observers believe that the gains from the construction of the Stiegler’s Gorge dam are not limited to economic profits, but also extend to Egypt achieving significant political gains in the GERD issue, according to Zakaria Othman, former researcher at the Arab and African Research Center and expert in East African affairs.

Othman told Al-Monitor that the Egyptian companies' keenness to build a dam in Tanzania under the directives of Sisi refutes all the accusations leveled by Ethiopia against Egypt, in which it claimed that the Egyptian authorities are not concerned with the interests of African countries but only with their own.

The Ethiopian authorities have repeatedly accused Egypt of obstructing Africa’s development through what the Ethiopian authorities described as “Egypt’s intransigence in the GERD negotiations.” Several high-ranking officials denied these claims. Sisi said in an official speech April 7 that Egypt respects Ethiopia's right to development, as long as it does not harm Egypt’s interests.

The GERD crisis began in May 2013, when the Ethiopian authorities announced that they will start diverting the course of the Blue Nile and building the dam on the Nile River. Years later, the crisis worsened after several negotiation attempts faltered, the last of which was held in Kinshasa in May.

The crisis became more complicated in 2020 when Ethiopia partially filled the GERD reservoir without reaching a binding agreement on the dam’s operation with Egypt and Sudan.

Meanwhile, both Sudan and Egypt continue to reject any unilateral action by Ethiopia, including the second filling of the dam, which is expected to start in July 2021, amid threats of escalation against Ethiopia.

Ahmed Alawi, a researcher on African affairs at the Arab Democratic Center in Germany, told Al-Monitor that the Stiegler’s Gorge dam and Julius Nyerere Hydropower Station will play an important role in the GERD crisis.

Once completed, the Julius Nyerere Hydropower Station is expected to produce about 2,115 megawatts (MW) of electricity per day. Egyptian Minister of Electricity Mohamed Shaker said in press statements in November 2020 that the station's production of electricity will cover all of Tanzania's needs while achieving a surplus to be exported to East African countries.

The GERD is expected to produce about 6,000 MW per day.

In this regard, Alawi said that despite the huge difference in electricity production, the Tanzanian dam will remain competitive.

“Ethiopia's domestic energy needs are greater than Tanzania's, which means that the largest proportion from the GERD’s production will be consumed locally. Also, the Tanzanian dam is one of the alternatives to provide electricity to East African countries but it is not the only alternative, as Egypt is looking into many others that can cover East African countries' needs of electrical power,” he added.

In 2019, the Arab Organization for Industrialization affiliated with the Egyptian armed forces announced building huge solar power plants to generate electricity in a number of East African countries, the majority of which are Ethiopia's neighbors, most prominently Somalia and Eritrea.

Many experts, Alawi included, believe that reaching understandings with Ethiopia’s neighbors in East Africa to boycott the electricity generated by the GERD and finding promising alternatives will push the Ethiopian authorities to reverse their intransigence toward Egypt and Sudan, as Ethiopia is expected to rely heavily on exporting the dam’s surplus electricity to cover its construction costs and generate profits.