Egypt is proposing new technical conditions to Ethiopia that would diminish the major damages the Renaissance Dam operation could cause. 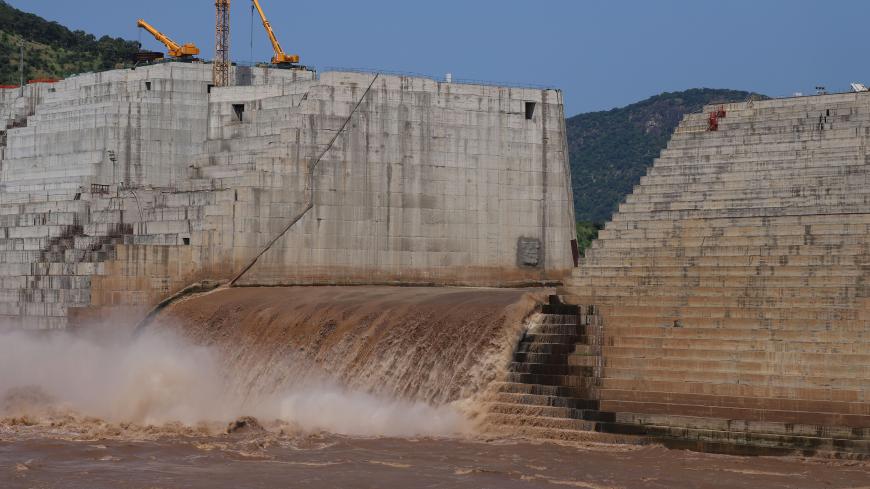 CAIRO — The second meeting of the Ethiopian, Sudanese and Egyptian ministers of water, held in Cairo Dec. 2-3 in the presence of observers from the United States and the World Bank, did not reach conclusive results. The points of contention over the mechanism of filling and operating the Grand Ethiopian Renaissance Dam (GERD) being built on the Blue Nile remain unresolved. They agreed to hold a meeting in Washington, DC, on Dec. 6 to evaluate the achievements of the negotiations so far.

The second meeting was part of the roadmap that the Egyptian, Sudanese and Ethiopian foreign ministers agreed on in Washington Nov. 6 to solve pending technical issues regarding filling and operating the dam by Jan. 15.

Al-Monitor obtained exclusive information on the Egyptian vision and technical stand regarding filling and operating the GERD, as per rules and mechanisms that operate the Aswan Dam in Egypt. Accordingly, the GERD in Ethiopia and the Aswan Dam in Egypt would be operated based on the same hydraulic system that suits the nature of the Blue Nile.

A technical official who attended the meeting in Cairo revealed the main points of the Egyptian vision, saying, “Egypt has put scenarios for filling and operating the GERD based on key principles that cannot be ignored, such as adapting to hydrological conditions, the annual flow rate and the critical level of water in the Aswan Dam reservoir. The plan is to maintain safe rates of strategic water storage in the dam’s lake.”

The official told Al-Monitor on condition of anonymity, “We believe the storage should be done over phases rather than a specific number of years, as was the Ethiopian opinion. The phases of storage are specified according to terms that take into consideration the annual flooding of the river, the level of rainfall and the drought seasons.”

He added, “During the meeting, we presented detailed data and figures about each storage stage, whether through the elevated water flow levels during floods or the low levels during drought periods. Egypt can then secure safe quantities of water flow reaching the Aswan Dam lake at the end of each storage stage so that the water would not reach critical levels [in the reservoir] estimated at 165 meters.”

According to the technical official, Egypt’s vision includes “a detailed plan for hydraulic connection between the Aswan Dam and the GERD, since they are two dams on one river and should be managed jointly according to a unified mechanism. As per this mechanism, the GERD would not affect the main benefits and rules of operation of the Aswan Dam in Egypt, at the levels of energy generation or strategic storage.”

The official noted, “Egypt’s proposal features technical proof and arguments that several local and international experts agreed on to put better scenarios to manage, fill and operate the GERD according to rules that reduce the significant harm to Egyptian and Sudanese interests. The Blue Nile supplies Egypt with 85% of its annual water share from the Nile waters estimated at 55.5 billion cubic meters of water.”

“The dispute is currently not related to the number of years required to fill the dam reservoir, but to clear and binding mechanisms and rules of management of the GERD as a source that controls water flow in the Blue Nile, regardless of Ethiopia’s sovereign considerations that cannot be meddled with," said the official.

He added, “The Egyptian negotiating delegation is attending meetings, presenting its case and offering strong technical arguments that support the Egyptian vision and proposition. Several local and international experts reviewed this proposition. No other vision that would put Egypt at great risk will be accepted at a time when the dam can be managed according to technical rules and systems that reduce harm and achieve mutual benefits and interests.”

“The main hurdle facing the agreement is Ethiopia’s refusal of any conditions that might prevent it from operating, filling and managing the dam single-handedly. However, the meetings being held under the US and World Bank sponsorship have largely contributed to changing the Ethiopian stance and its dismissal of any discussion of an Egyptian technical proposition on the [negotiating] table," added the official.

Egypt is concerned over the repercussions of the GERD on its interests in the Nile waters. According to local estimates, the GERD will cause soil salinization in the Delta area due to lack of freshwater supplies from the Nile. Besides, the dam will reduce the generation of electrical power from the Aswan Dam due to dropping water levels in the Aswan Dam lake, after the GERD lake is filled. The agricultural space will also shrink, and prices of food will rise, not to mention other social and environmental problems.

Former Minister of Water Resources Mohammad Nasr al-Din Allam told Al-Monitor, “Egypt has technical values that it cannot bypass during the ongoing negotiations. In the storage phase, the GERD cannot lead to serious damage, and for that reason, the water level in the Aswan Dam lake was set not to drop below 165 meters. Egypt’s proposal also requires a minimum annual release of 40 billion cubic meters in the Blue Nile.”

Allam said, “Egypt’s conditions guarantee the continuous operation of the Aswan Dam to generate 50% of its electrical potential and secure the country’s needs in case of unexpected drought.”

He said, “Ethiopia’s stance not to accept any conditions, whether in the filling or operation phase, reflects its policy to try to control the Blue Nile, and consequently, Egypt.”

Egypt has been open to dialogue under US auspices, with the presence of World Bank representatives, and it has shown leniency in discussing serious technical propositions that guarantee reducing the expected damage from the GERD on its interests in the Nile waters. Meanwhile, Ethiopia had anticipated the technical meetings by announcing the completion of the work in the Saddle Dam Nov. 12 to send a message that facilities in the dam site are not affected by the course of negotiations.