In anticipation of a water crisis following the construction of the Renaissance Dam, Egypt’s government is preparing a draft law to impose harsher sanctions on the cultivation of water-intensive crops, but some say farmers must first be offered alternatives. 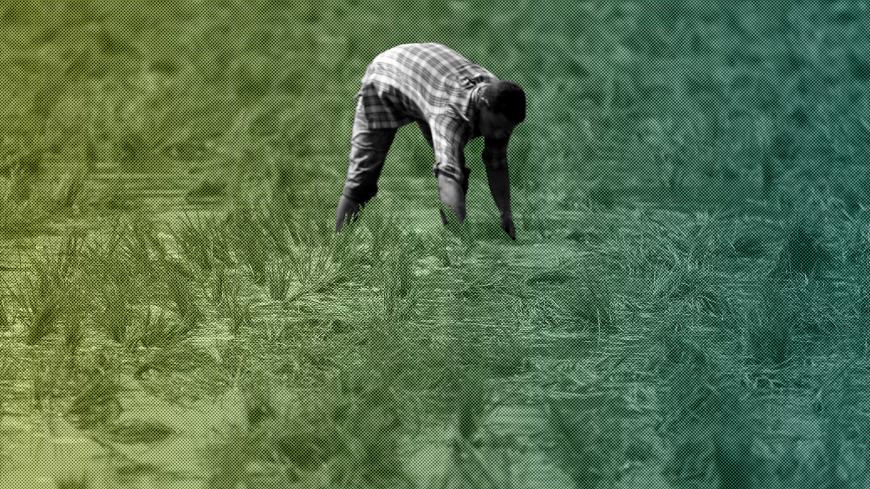 CAIRO — Egypt’s Cabinet completed July 5 the drafting of the new water resources and irrigation bill, which calls for penalizing farmers who grow water-intensive crops, especially rice, outside the land plots authorized by the government on an annual basis.

The sanctions come amid a water crisis in Egypt, which is expected to exacerbate with the opening of the Ethiopian Renaissance Dam.

Article 32 of the bill states, “The Ministry of Water Resources and Irrigation specifies the surface areas and regions allocated for rice cultivation yearly by virtue of a decision issued by the minister. The decision will also determine the areas and regions allocated for growing water-intensive crops yearly. The growing of rice and crops that require high water levels in places other than those determined by the ministerial decision will be prohibited.”

Article 126 of the bill says that any person who violates the provisions of Article 32 will be sanctioned by imprisonment for a period of not more than six months and a fine not less than 2,000 Egyptian pounds ($112), and not more than 10,000 pounds ($560) for each acre or fraction of an acre or with any of those two sanctions. “The sanction will be doubled in case the violation is repeated,” the article adds.

The Ministry of Water Resources and Irrigation, in coordination with the Ministry of Agriculture, determines each year before the rice season the surface area to be cultivated with rice annually, according to the allocated water quantities to be pumped for agricultural use from Egypt's estimated Nile water quota of 55.5 billion cubic meters.

The Ministry of Irrigation issued a decision Jan. 23 for the 2017 rice planting season to allocate 1.76 million acres to plant rice in specific places in only eight provinces, and said sanctions would be imposed on violators.

The Ministry of Agriculture issued a report that was circulated in media outlets July 26 indicating that 227,000 acres have been planted in violation of the Irrigation Ministry’s decision; violation reports were being drafted for 192,000 farmers. Both ministries have shared responsibility to determine rice planting, detect violations and set fines.

Egypt’s government is seeking to shrink the rice cultivation area. Mohamed Abdel Ati, the minister of water resources and irrigation, decided on Oct. 26, 2016, to decrease by 34.6% the area allocated to rice production in the 2017 season.

Although the annually cultivated area in 2016 exceeded 2 million acres and given that many farmers are inclined to oppose the government decision and grow rice outside the allocated lands, the Egyptian parliament has always intervened in previous years with the presidency and the government to obtain a decision exempting farmers from fines.

The Ministry of Water Resources and Irrigation has raised its voice against this exemption in the last two years, insisting on removing the unauthorized rice crops by burning them and fining violators about 3,600 Egyptian pounds ($202) per acre for squandering irrigation water.

The former head of the Egyptian Farmers Union, Mohamed Barghash, told Al-Monitor, “The law is an ultimatum for farmers — they either go to jail or face hunger."

Barghash called on President Abdel Fattah al-Sisi to intervene, especially since the government imposes stringent sanctions that prevent farmers from growing rice crops annually without providing any alternative, knowing that some Egyptian farmers are forced to grow rice to counter the salinization of the soil, especially in areas near the Mediterranean Sea.

He said, “Egyptian farmers are never against the protection and rationalization of Egypt's limited water resources, but the government is not looking at the whole picture.” Barghash called on the government to assess the role of agricultural research centers whose staff members are working in offices and not making any field visits to agricultural land and fields to promote the farmers’ attachment to their land and guide them to alternatives crops that may fill the food gap in Egypt, as well as achieve a balance whereby the kinds of crops grown due to the salinity of their agricultural land do not drain water resources.

The referral of the bill from the government to Egypt’s parliament is expected to stir a wave of controversy among parliamentarians in light of the opposition of many lawmakers to the sanctions imposed in the bill, which include an imprisonment penalty.

In 2016-17, the total fines collected by the Ministry of Irrigation and imposed on farmers cultivating rice in violation of the 1984 Irrigation and Drainage Law No. 12 amounted to 3.6 billion pounds.

The undersecretary of the Egyptian parliament's Agriculture Committee, legislator Raef Tamraz, told Al-Monitor that he intends to mobilize the members of the committee to keep the new government bill from being approved by parliament.

“The government must first provide alternative solutions for rice production. The law will turn more than 1 million acres of Egyptian land into fallow lands, especially in the regions near the Mediterranean Sea in the Delta, which are only suitable for rice cultivation in summer as a result of salinization of the soil,” he said.

Parliamentarian Magdy Malak, also a member of the Agriculture Committee, has a different opinion. He told Al-Monitor, “Members of parliament must support any steps that would regulate and maintain Egyptian water rationing — especially as Egypt is expected to face an imminent water crisis if no agreement is reached with Ethiopia on the filling period of the Renaissance Dam in such a way that does not harm the flow of Egypt's Nile water quota.”

Hossam El-Imam, the director of the Regional Center for Water Ethics in the Ministry of Water Resources and Irrigation and official spokesman for the ministry, told Al-Monitor, “The new sanctions are not meant to imprison and fine farmers but to prevent them from committing a crime by violating the water rights of other farmers.”

He noted, “Egypt no longer has the luxury of growing crops with high water needs, given the scarcity of our water resources. It is not just about rice; other crops will soon be cut also.”

In the meantime, Cairo keeps deploying continuous efforts to face its water scarcity and to resolve its disputes with the Nile upstream countries over their demands to re-divide Nile water quotas on the one hand, and with Ethiopia to ease the anticipated impact from the filling of the Renaissance Dam on the other hand.