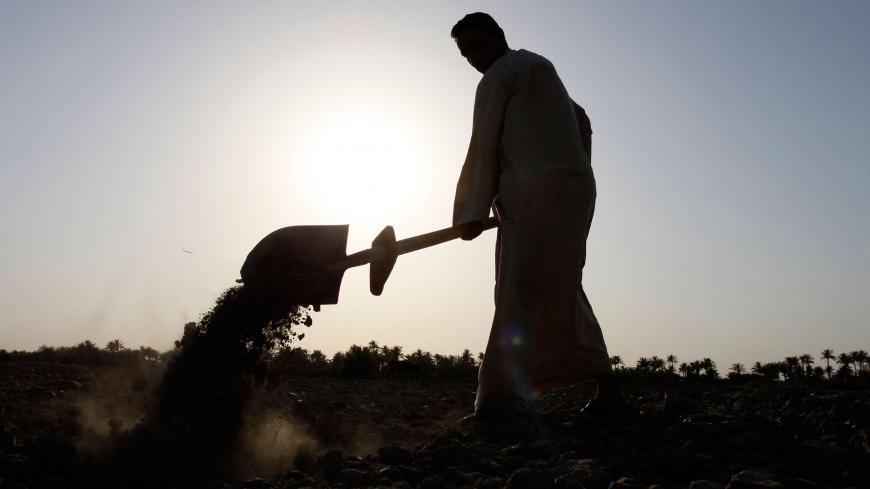 An Iraqi man uses a shovel on a dry field in an area affected by drought in the Mishkhab region, central Iraq, July 2, 2018. - HAIDAR HAMDANI/AFP/Getty Images

Rice farmers in the areas of Salahiya, Mhanawiya and al-Shamiya in Diwaniyah province staged protests June 25. To express their plight caused by the drought, protesters lifted a coffin carrying a farmer holding an ax.

The farmers’ protests denounced the Ministry of Agriculture’s June 17 decision to ban the planting of eight summer crops: rice, white and yellow corn, sesame, cotton, millet, sunflower seeds and mung beans. The ministry claimed this is due to the reduced water levels of the Tigris and Euphrates rivers.

In a related context, a government decision was issued June 12 to suspend the cultivation of rice in Diwaniyah province. The decision was allegedly attributed to water scarcity and the allocation of water only for drinking and gardening purposes. Prior to that, in 2017, the Ministry of Agriculture had reduced the area allocated for the cultivation of rice in the province of Dhi Qar, in the south, to half of the proposed area.

Iraq's rice production for the 2017 season was estimated at more than 100,000 tons. The country is classified as one of the leading Arab countries in producing several types of rice, including the Nakaza rice in northern Iraq.

In southern Iraq, amber rice is the most cultivated variety. It has a sweet aroma that distinguishes it from all rice varieties in the world. Iraq was one of the major exporters of amber rice before the 1980s. Nowadays, this major food commodity is threatened by the water crisis because the plant needs to be immersed in water for several months.

The moratorium seems to have stirred a dispute between the ministry and the farmers. Spokesman for the Ministry of Agriculture Hamid Nayef told Al-Monitor, “The agricultural plan highlights the need to irrigate about 600,000 dunams [about 148,000 acres] of land for the cultivation of summer crops, excluding water-intensive crops, mainly rice and corn.”

Hamid Sultani, a farmer, saw the decision as unfair. “This decision will put an end to the cultivation of rice. The ministry did not think about the fate of thousands of farmers whose source of livelihood has been cut,” he told Al-Monitor. “Rice plants require large amounts of water for about six months. The seedlings must be submerged in paddies.”

Sultani was not surprised by the ban. He explained that governmental support to the agricultural sector is trivial and Iraqi farmers are unable to cope with the agricultural and marketing crises and problems related to subsidies. “Even when we produced rice in large quantities, we had to sell it in the private sector markets,” he said. “We did not sell it to the Ministry of Commerce, which seemed more interested in imported rice than domestic production.”

Haidar Abdul Wahid al-Abadi, the head of the General Federation of Agricultural Cooperative Associations in Iraq, agreed with Sultani. He told Al-Monitor, “The ministry sought to reduce water consumption by preventing the cultivation of the rice crop, which is the livelihood of farmers in the southern governorates. This ban will generate social and economic disorders, increase the rates of poverty and push the peasants to migrate to the cities.”

He told Al-Monitor, “The ministry’s decision to reduce agricultural areas will lead to an expansion of undeveloped lands. Instead of this ill-conceived decision, the ministry ought to prepare projects that provide water, such as [concrete] lining for rivers and modern irrigation techniques that limit water losses, and ensure the optimal use of the amount of water released.”

Barring farmers from sowing specific crops is not something new. Suhaila Abbas, the deputy head of the agricultural committee of the Babil Provincial Council, noted that in the past five years, rice cultivation was banned in areas between the provinces of Babil and Najaf due to water shortages. Farmers were forced to steal water quotas to irrigate their fields.

Abbas does not think drought is the only reason for the declining cultivation of several crops, especially summer ones. She said, “The lack of allocations to farmers for the purchase of pesticides and fertilizers also contributed to this decline.”

She warned of the imminent danger of halting crop production. “Farmers would be forced to sell their farms and plantations and practice other professions in the city that are not related to agriculture.”

Shorouq al-Abayji, a member of the parliamentary agricultural committee, talked to Al-Monitor about the reasons for the deterioration of crop cultivation. “Regional countries want to keep Iraq as a consumer market for their products. This is encouraged by the rampant corruption among Iraqi officials in charge of agricultural and marketing policies. Unsupervised border crossings make imported products more competitive than similar local products in the Iraqi markets.”

Member of parliament Farhat al-Tamimi, the head of the Committee on Agriculture, Water and Marshlands, suggested several solutions to revive the role of farmers. “The farmer should be compensated for the damage sustained as a result of the ban of cultivation of certain crops.” He added, “A practical program should be set up for the distribution of water revenues on agricultural lands across all provinces using a modern irrigation system.”

The Ministry of Irrigation is responsible for preparing a highly efficient irrigation project that increases the production capacity of lands and encourages farmers to plant more crops to achieve self-sufficiency. It should be noted that major food-security crops such as rice and corn have been associated with Iraq's cultural identity for hundreds of years.