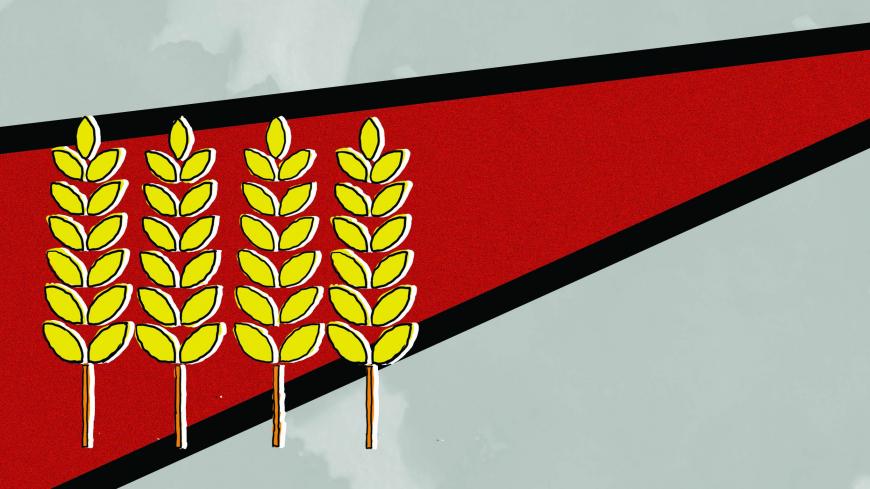 BAGHDAD — The Tureibil crossing, or more commonly known as the Karameh border crossing, between Jordan and Iraq reopened in early September in tandem with the opening of another border crossing with Saudi Arabia. This means that more foreign goods are likely to flow into the Iraqi market, which already lacks national products, especially food and agricultural goods.

The prospects for increased imports, which is not good news for the local production industry in Iraq, prompted parliament’s Agriculture, Water and Marshlands Committee on Aug. 14 to accuse the Ministry of Agriculture of mismanagement and confusion in supporting these foreign goods, which caused the local market to become flooded with imported products.

Mohammed Mansouri, an expert on local livestock, warns against “a catastrophe in the sector of livestock and agriculture in Iraq,” urging the government to work “on achieving food security.”

However, the failure of agricultural projects in Iraq is not only the result of poor planning and management, but also a “corrupt agenda seeking to keep this sector lagging so as to continue relying on imports,” said Ali al-Badiri, a member of the Agriculture, Water and Marshlands Committee, in a media statement Aug. 24. “Impeding the cultivation of wheat crops is a conspiracy, as this cultivation has become a threat to the investments of the corrupted,” he said.

In the same vein, Suhaila Abbas, the head of the Agriculture Committee of the Babil Governorate Council, told Al-Monitor, “Linking food security to importation is not due to technical problems such as drought or the rudimentary irrigation and land treatments techniques, as these can be addressed through development plans. This is, however, due to political reasons. Many of Iraq’s neighbors have an interest in keeping Iraq unable to become self-sufficient in terms of food, so it continues importing food products.”

“Developing agricultural production in Iraq’s vast lands will make its products sweep the markets of the Gulf and other neighboring countries, which believe any development at this level as an economic threat to their exports,” Abbas said.

She added, “A group of businessmen and importers affiliated with certain parties would be affected should the importation stop, as they monopolize the market.”

In a press statement Aug. 19, Mohammed Shia al-Sudani, the labor and social affairs minister, accused “regional and international traders and businessmen of seeking to monopolize the Iraqi market by hindering the purchase of national products.”

It appears that Arab countries are interested in exporting to Iraq. On Aug. 17, Syrian sources reported that Iraq’s share of Syrian exports is about 40%. Similarly, Iranian sources said Aug. 26 that Iraq would remain the largest market in the region for another 15 years for Iranian goods, mainly food products.

Moreover, Iraq is one of the largest importers of grains in the world, which constitutes the main ingredient in the Iraqi diet. Iraq imports more than 30 million tons of wheat and 1 million tons of rice.

Parliamentarian Shuruq al-Abayji, a member of the Agriculture, Water and Marshlands Committee, told Al-Monitor, “Regional countries are racing to establish border crossings with Iraq. The country’s poor agricultural production has made Iraq an open market for the products of neighboring countries, which came to the detriment of Iraqi farmers who are unable to compete with foreign goods.”

She added, “This has led to widespread unemployment in both the countryside and the city. Corrupt people are deliberately delaying the development of the agricultural sector and have gone as far as to import bad seeds and fertilizers so Iraq continues to rely on importations, of which they receive some commissions. Corruption is rampant at the border crossings and has led to smuggling livestock outside the country, in return of importing meat without any surveillance or medical checks."

According to official figures by the Iraqi parliament’s Finance Committee on Aug. 19, Iraq is losing $8 billion a year from the public budget because of blackmail and the smuggling of goods through border crossings.

According to Abayji, protecting Iraqi farmers requires “the elimination of corruption among those in charge of the agricultural policy in the country, controlling the border crossings and strengthening local products to be able to compete with imported goods.”

Abayji also calls for “the development of modern irrigation, cultivating and storing techniques, the support of agricultural research, training farmers to use advanced farming methods and settings laws that meet the conditions of fair competition between importers and exporters.”

She also believes it is necessary to “lend farmers in a transparent way,” stressing that “previous projects were funded in a corrupted manner and funds ended up in the pockets of some corrupt investors.”

It is worth mentioning that the Iraqi Products Protection Act No. 11 of 2010 provides for the need to avoid drowning the local market with imported products supported by exporting countries.

Agricultural expert Amer Habeeb told Al-Monitor, “It is very important to encourage local agricultural investments, as this would create more job opportunities and make local products available on the market, instead of spending huge sums on imports.”

Habib called on “implementing the tariff laws on importers and thus paving the way for a fair competition with the local producer.”

After a bitter experience with wars that led to economic and security chaos, Iraq needs to promote its food security by strengthening the role of farmers and local products. Iraq’s agricultural lands are vast, not to mention the abundant waters in the country, and yet vegetables and fruits are being imported from desert countries such as Saudi Arabia and Jordan.

Agriculture and farming
Corruption and nepotism