Despite the floods and fires, Iraq has achieved self sufficiency in producing crops this year. 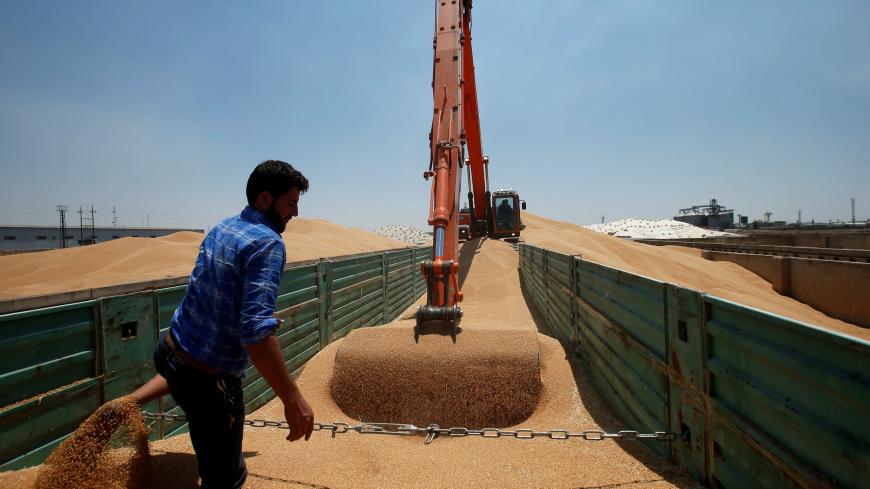 A farmer helps an excavator to unload wheat grain at a silo in Mosul, Iraq, June 12, 2019. - REUTERS/Azad Lashkari

Iraqi Minister of Trade Mohammed Hashim al-Ani announced July 5 that the ministry received about 4 million tons of local wheat, a step that signals the country is ready to achieve self-sufficiency in this strategic crop.

This comes despite the fires that hit agricultural fields across Iraq and ravaged 40,000 acres (16,000 hectares) of land.

Since the end of 2018, Iraq appears to have achieved self-sufficiency in many agricultural crops. This prompted the Ministry of Agriculture to ban the import of seven crops abundantly produced in the country.

The amount of land planted with grains has been so great that it has “managed to limit the impact of the recent fires on the country’s plans to achieve self-sufficiency in wheat and barley,” Ministry of Agriculture spokesman Hamid al-Nayif told Al-Monitor.

“One of the reasons behind the increase in production is the ministry’s launch of the wheat agriculture expansion project at the end of 2009, which focuses on providing highly productive seeds capable of weathering drought and salinity, knowing that the latter is a widespread problem across the country,” Nayif said.

A major factor for the dramatic increase this year is an increase in rainfall. The country produced about 2.17 million tons of wheat in 2018, down from 3 million tons in 2017 planted on ​​4.2 million dunams (2.6 million acres).

On July 17, Maysan province in the south of Iraq reached an all-time high level of wheat and barley production at more than a quarter of a million tons. On April 11, Dhi Qar province added 285,000 dunams (176,000 acres) to the original agricultural plan.

Suhaila Abbas, a member of the Agricultural Committee in the Babylon Provincial Council, told Al-Monitor, “More than 100,000 tons of wheat have been sold during the current agricultural season.”

She deemed this to be “an achievement for farmers in the province, considering the drought and the modest agricultural techniques.”

“When farmers find themselves making a healthy profit from selling their products to the government, their production is expected to increase. This helps the country achieve self-sufficiency and export to neighboring countries,” Abbas said.

She said, “The agricultural policies that support local production encourage farmers to plant more so long as they have access to water.”

These agricultural policies may not be helping the Kurdistan region, however. On June 20, the Iraqi government's decision to increase the quantity of wheat it buys from all Iraqi provinces save the Kurdistan ones caused significant damage to the farmers of the region, which did not submit an agricultural plan to the ministry.

The Ministry of Trade announced July 23 that Ninevah province, which is adjacent to territories administered by the Kurdistan Regional Government, sold the biggest quantity of wheat, as its farmers sold more than 600,000 tons as of July 22.

Duraid Hekmat Toubia, director of the Ninevah Agricultural Department, told Al-Monitor, “More quantities would have been produced had it not been for the drought, the shortage in harvesting machines and the more than 250 fires, which ravaged many fields.”

It is not only the fires that have reduced the volume of production this year. The head of the General Federation of Agricultural Cooperative Societies, Hassan Nassif al-Tamimi, told Al-Monitor, “The floods caused extensive damage to wheat fields in the south, central and northeast regions, such as what happened in Wasit province.”

Tamimi said, “The fires and floods that hit several cities led to the deaths of about 15 farmers,” and added, “This disrupts food security. Also, many of the fires were deliberate and were aimed at damaging local production.”

The higher-than-expected surge in cereal production prompted the Iraqi government on April 20 to decide to use concrete security barriers that were removed from the streets of the capital, Baghdad, and other cities because of improvements in security stability, in the construction of grain storehouses. The project was first implemented in the province of Kut.

Amer Habib al-Khafaji, director of the Organic Fertilizers Project in Babylon, told Al-Monitor, “Iraq has indeed become self-sufficient. It currently imports only about 1½ million tons a year of wheat. This quantity is not imported to fulfill the country’s needs but to integrate the imported wheat into the local one, which has a low percentage of gluten.”

The US ambassador to Iraq, Matthew Tueller, met with Iraqi Minister of Agriculture Saleh Al-Hassani on Aug. 1 and praised the significant increase in agricultural production, noting that the United States seeks to invest in Iraq.

Member of parliament Aboud al-Issawi, head of the parliamentary agriculture committee, told Al-Monitor, “Strategic production helps the country sustain its self-sufficiency instead of having it last for a year or two only. Farmers should be supported, especially in cases of emergency. They should rely on the state whenever there are floods or fires, and this has been the case recently.”

He added, “The committee advanced recommendations binding the government to compensate those affected by fires and floods.”

Iraq also has a lot of land suitable for agriculture that is not being used. Experts said that to properly utilize this land, Iraq requires modern cultivation techniques, scientific plans and investment projects that would involve research centers and universities and employ agricultural academics, many of whom are currently unemployed.