Who is really behind torching of Iraqi grain fields?

The setting afire of grain fields in disputed areas between Baghdad and Erbil flames ethnic tensions between Arabs and Kurds. 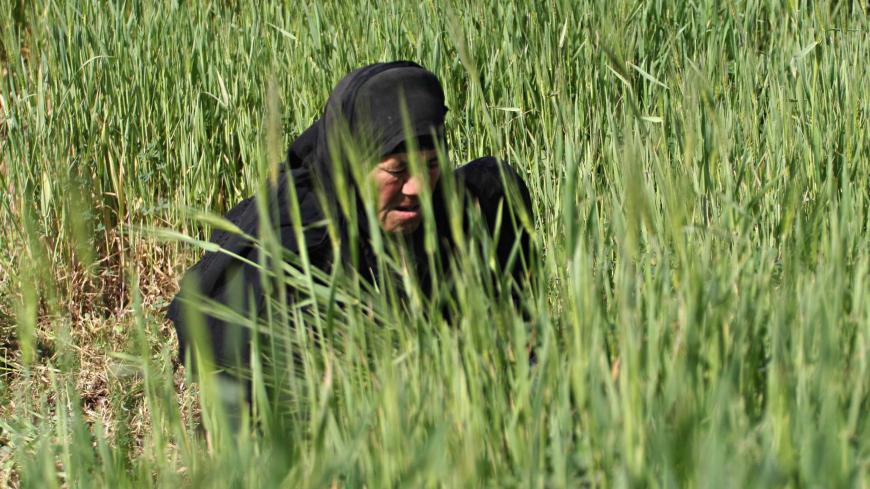 An Iraqi woman works in a field on the outskirts of the capital, Baghdad, Feb. 28, 2009. - ALI YUSSEF/AFP/Getty Images

SULAIMANIYAH, Iraq — Thousands of dunams of wheat and barley crops were torched this month in Kirkuk, Ninevah, Salahuddin and Diyala provinces, adding agony to the harsh lives of Iraqi farmers and raising the question of who is really behind the fires.

The Islamic State (IS) has claimed responsibility for 13 fires, and described the fields as being owned by “infidels.” However, some Kurds accuse Arabs in the disputed areas between Baghdad and Erbil of incinerating Kurdish farmers' fields. Erbil is the seat of the Kurdistan Regional Government (KRG).

The Iraqi Agriculture Ministry said in a statement that the fires are “deliberate” and established a crisis unit to follow up the incidents in the affected Iraqi provinces.

On May 14, Kurdish residents of Palkana village, home to nearly 25 families in western Kirkuk, claimed that hundreds of Sunni Arabs from the Shamar tribe forcefully stormed the village and asked them to leave. Both sides claim ownership of agricultural lands in the area. Kurdish villagers responded by contacting the Iraqi army, which later on prevented clashes between both sides. After the incident, hundreds of dunams of grain crops were burned down in several villages of the Sargaran area east of Qarachuq Mountain — near Makhour town — where IS militants are still active.

“I have been at the scene, more than 150 acres of agricultural crops cultivated by Kurdish farmers were burned in Sebiran village near Qarachuq Mountain,” Badradin Shamsadin, a member of the Sargaran town council, told Al-Monitor.

“Unknown men, labeling themselves as IS fighters, previously threatened Kurdish farmers via cellphones tthat their fields would be set on fire if they did not pay Islamic zakat [alms] out of their crops,” Shamsadin said.

He said Arab settlers have burned Kurdish farmers' fields “under the name of IS militants.”

Kirkuk has a mixed population of Kurds, Turkmens and Arabs. According to Article 140 of the Iraqi Constitution, the final status of Kirkuk and other areas should be resolved in a referendum to determine whether they will remain part of federal Iraq or the semi-autonomous Kurdistan Region.

The former Baath regime implemented the “Arabization” process between 1970 and 1978 through settling Arabs from other Iraqi provinces into the disputed areas of Kirkuk. Within the framework of Article 140, some lands that had been confiscated from Kurds and Turkmens were returned, while Arab settlers were given financial compensation. Land ownership disputes in some areas remain unresolved.

Burhan Mazhar al-Asi, head of the Arab bloc in the Kirkuk provincial council, denied the accusations and indicated that IS militants are performing terrorist acts and torching the fields to create instability in the area.

“On the ground, there is no such thing as Kurds' setting fire to Arab farmers’ fields or Arabs torching Kurdish farmers' fields,” Asi told Al-Monitor.

The area is now protected by the Iraqi federal police. Asi rejected the idea of joint patrols against IS involving Iraqi federal troops and Kurdish peshmerga forces in Kirkuk and other disputed areas.

A Kirkuk police spokesman told Al-Monitor that an investigation to determine who is behind the fires is continuing, but that no one has been arrested to date.

In a bid to deal with the issue, a delegation from the Kurdistan parliament’s agricultural committee recently visited Baghdad.

Rebwar Taha, a Kurdish lawmaker in the Iraqi parliament, told Al-monitor, “We have asked the Iraqi government to seriously investigate the sensitive dossier of the torching of agricultural fields all over the country through its security agencies in order to know what is happening and who is to be blamed.”

Bilal Wahab, Wagner fellow at The Washington Institute for Near East Policy, told Al-Monitor, “These incidents are unsettling. Ethnic tensions in Kirkuk will upset the ongoing KRG-Baghdad honeymoon. Accurate information, as well as accountability, are key to containing this flare-up — pointing out who did it and holding them responsible. IS exploits the vacuum left by diffused responsibility over security.”

He said unilateral actions by Baghdad and Erbil would "hinder a law-based, negotiated settlement. The presence of the PMU on the Iraqi side and international fissures on the Kurdish front add more complexity to a settlement. Demographic changes, natural or manmade, would only complicate such negotiations.” The PMU are the Popular Mobilization Units, formed in 2014 to fight IS.

He said Erbil and Baghdad need a mediator who is “an honest broker,” and said the United Nations Assistance Mission for Iraq is in the best position to play that role.

The Iraqi government annually purchases wheat and barley from local farmers with supported prices in order to urge them to increase production for a growing population of more than 40 million.

Following a dry 2018, heavy rainfalls have helped Iraq’s grain production increase sharply in 2019, and last month the Agriculture Ministry said the country is on track to reach self-sufficiency.

Salam al-Shamari, head of the Iraqi parliament's Agriculture Committee, said May 21 that according to official data submitted by the Agriculture Ministry, 3,000 dunams of crops have been burned. He described the arson as “dangerous terrorist” acts. He blamed unnamed “foreign sides” for burning the crops.

Some Iraqi outlets claimed PMU forces are setting the fires in Salahuddin province so that the Iraqi government will have to purchase Iranian wheat.

Al-Monitor tried to contact Muhanad al-Aqabi, director of PMU media, and Iraqi Defense Ministry spokesman Tahsin al-Khafaji, but they were not immediately reachable for comment.

Iraq, which largely depends on oil for its budget, is still struggling to repair the damage that occurred from fighting IS between 2014 and 2018.

Those torching the Iraqi crops, whomever they are, seem to want to create ethnic tensions and further damage the country’s agriculture, which is on the brink of collapse.