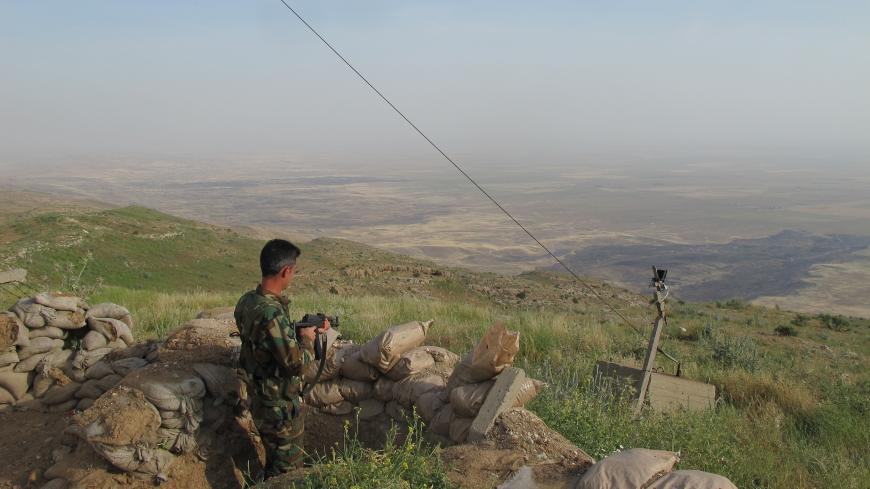 A peshmerga soldier on top of the Qarachogh Mountains looks down at wheat fields set on fire earlier that day, May 14, 2019. - Shelly Kittleson/Al-Monitor

MAKHMOUR, Iraq — The Iraqi Civil Defense announced May 28 that 136 fires had occurred in grain fields in the previous 18 days throughout various provinces, including 59 in Saladin, 17 in Kirkuk and 15 in Ninevah. The Islamic State took responsibility for 13 of them.

Eight fires broke out in Kirkuk province on May 25, destroying crops. In the previous week alone, some 600 dunams of land planted with wheat and barley had been set alight by the militant group.

The peshmerga atop Iraq's Qarachogh Mountains pointed at a blackened stretch of what up until a few hours before had been wheat fields. "The fire started at 11 this morning. I only caught sight of one terrorist" as he fled, the soldier told Al-Monitor as the wind whipped wildly and the sun bore down. "But there must have been more," he added.

Grain fields have been set alight across Iraqi territory in recent weeks, with areas disputed between Baghdad and the Kurdistan Regional Government (KRG) hit especially hard.

Fires have been reported in Makhmour, areas in the Tuz Khormato district, Riyadh and other districts of the Kirkuk province, as well as Ninevah and Diyala.

Across the border, Syrian crops in opposition-held areas have also been targeted, with the Islamic State (IS) boasting that it is behind the attacks and referring to them as "punishment."

IS had threatened to set fields on fire in Iraq if farmers did not pay "protection money."

An already suffering agricultural sector, investment and general security are now at risk.

The first wave of fires set in May was in areas previously under peshmerga sector 6 commander Maj. Gen. Sirwan Barzani.

In an interview at Black Tiger camp there on May 14, Barzani told Al-Monitor that "IS is like [it was] in 2012. Almost every day they conduct an attack, especially in Sunni areas."

He said they have a great deal of "activity close to my front line, in the Makhmour area. It is mostly not on our side; it is on the Iraqi side."

The difficulties of securing and monitoring areas containing several forces are especially clear in the disputed areas.

Barzani noted that the Kurdish villages on the other side of the Qarachogh Mountains were "our front line" after they retook the area from IS in 2014 until October 16, 2017, when "they betrayed us" in Kirkuk.

The "betrayal" the peshmerga commander was referring to was the taking of Kirkuk by Iraqi forces and the subsequent push into the area that had been under his control and has now been hit by arson.

"So we had to go back behind the mountains," he said, and "our front line is now at the top of the mountains."

"The problem is that whole area to Hawija, especially at night, is almost open to" IS, he noted, "and they have many tunnels and caves in the mountains."

Two days before, he noted, IS had started to set fires in villages and fields after attempts to extort money from the inhabitants failed. He said that ''in some villages, the inhabitants have already left because [IS] came many times asking for 'taxes,' money and food.''

The villagers then "went to the Iraqi forces, but they said they could do nothing for them," Barzani added.

Though some have long accused the Kurds of being too lenient on IS fighters and supporters — including claiming that the KRG is a refuge for many who would be imprisoned elsewhere — Barzani scoffs at the idea.

Some were killed after victory was announced against IS, he said, due to "the movement of IS between Qayyarah and Hawija and Ninevah."

Barzani would like to see his troops back in the area across the mountains, and he claims this is the only way the problem will be solved.

"The Iraqi government does not have enough forces," he said.

But if an operation is conducted in the area, he said, "We can go back to our positions and control the area."

"It means nothing if you lose peshmerga and then you don’t control the flat area. IS will be back again after 24 hours," he said, stressing that he would not involve his men in operations in that area unless they could continue to hold it.

Barzani said he sent his idea to send peshmerga forces back to the areas they left in late 2017 on the other side of the mountain to the coalition and "sent the report to the Ministry of Peshmerga."

"We don't discuss it directly with Baghdad. The idea is to go through the Ministry of Peshmerga and the operations center of the coalition with the Ministry of Defense in Baghdad," he said.

The mountains and nearby wide expanses with fields are problematic, he said.

"In the villages, inhabitants will give information to us peshmerga. So it is safer than in open areas," he noted.

Barzani claims the Iraqi central government has long been making it hard for peshmerga forces to operate properly, despite its battlefield successes against IS, by not paying the KRG its part of the budget — though "the last four months they have started to send part of the salaries of the peshmerga."

According to the constitution, he said, "The budget for training, weapons, salaries, etc., should come from Baghdad. This has never happened. Not in 12 years — even during [the times of IS]. Sometimes, [even] the coalition sent weapons, and sometimes they would take [some] of these weapons and not send them to the peshmerga."

"The entire world knows about the peshmerga now. Why? Because of the fight against IS," Barzani said, adding that Baghdad was "sending $125 million every month to Mosul during IS times. We asked them about the Kurdistan budget, and they said 'We don't have money.'"

The KRG asked Baghdad why the money was being sent to the IS capital and received the response that it was ''because they are (officially) government employees." But they are working for IS, so they were IS employees,'' Barzani said, angrily, presuming that anyone who had stayed in those times could be assumed to have been helping IS in some way.

Meanwhile, the KRG had "accepted 1.86 million internally displaced persons" from IS-held territory ''because they didn't want to stay there."

"We said, so you have to pay the government salaries of those in IS territory even if they are working for IS because they are government employees. But what about the employees in the KRG? Who do they belong to? Aren't they Iraqis? Aren't they working in hospitals, in schools? So it was very clear who was fighting IS and who wasn't,'' Barzani said.

Barzani said he was much more optimistic about the current government under Prime Minister Adel Abdul Mahdi.