Jihadis from Syria blamed for multiple attacks on Iraqi Kurds

An onslaught of attacks on Kurdish peshmerga forces and villages in northern Iraq has sparked concerns over the presence of Islamic State cells and whether they have been bulked up by jihadis arriving from Syria. 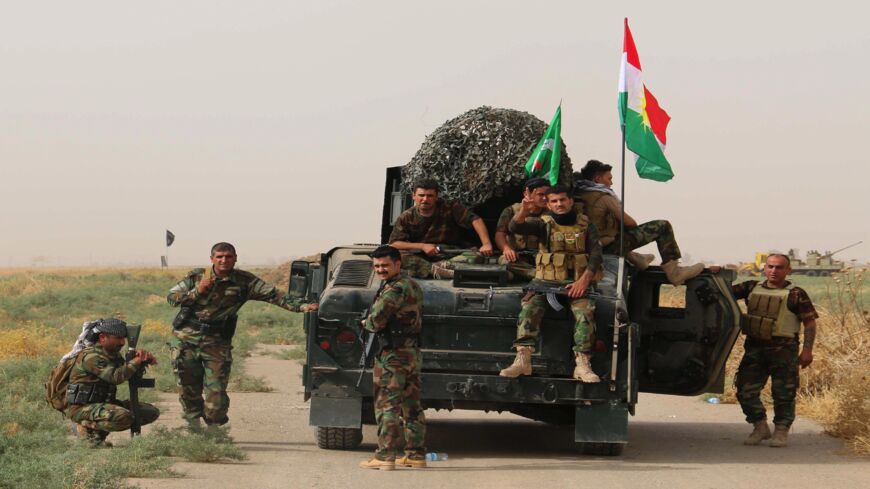 Iraqi Kurdish peshmerga fighters pose for a photo next to a military vehicle bearing the Kurdish flag after they reportedly captured several villages from the Islamic State in the district of Daquq, south of the northern city of Kirkuk, on Sept. 11, 2015. - MARWAN IBRAHIM/AFP via Getty Images

BAGHDAD — A recent string of attacks targeting Kurdish forces in northern Iraq in areas disputed between the central government and the Kurdistan Regional Government (KRG) has raised questions about where the attackers came from and how long they have been in the area.

Local sources have claimed to Al-Monitor that Islamic State (IS) forces operating there now include foreign nationals.

Yet another attack attributed to IS on Dec. 6 targeted Kurdish peshmerga forces in a village in the Makhmour district of Ninevah province in northern Iraq.

Shortly before, the village of Liheban, in neighboring Kirkuk province and with a Kurdish population, had been entirely evacuated by the local inhabitants after IS attacks on it and other locations nearby. A joint operation between peshmerga and Iraqi security forces later reportedly secured the village.

A peshmerga commander for the Qaratapa-Hamrin area had on Dec. 4 told Kurdish-language media that “over 200 militants” from the Jundallah jihadi group had recently pledged allegiance to IS in Syria and had then been “sent to Iraq to escalate attacks in all provinces.”

He added, "Someone close to [defunct IS leader Abu Bakr] al-Baghdadi is leading them."

Baghdadi reportedly blew himself up in Idlib province in northwestern Syria after being cornered by the United States during an Oct. 26, 2019, raid.

Movement of Jundallah fighters from the province would be significant if true. Jihadi groups are notoriously fluid and fractious, often drawing in....as recruits drawing on disgruntled members of other groups for recruits.

Hayat Tahrir al-Sham (HTS), which exercises de facto control over Idlib, has in recent years seemed to cooperate with Turkey and possibly Western nations. This has drawn criticism from more extreme factions.

HTS has also likely played a part in the capture of major IS leaders and possibly the targeting by the United States of other extremists in the province.

It has cracked down on other jihadi groups operating in its territory, forcing some to disarm or leave.

Al-Monitor’s Sultan al-Kanj reported in July that the “@MzmjerSh Twitter account of a former jihadi leader from Syria stated in a post on July 8 that "… the remaining jihadi groups that were acting outside HTS’ authority in Idlib were Ansar al-Islam and Jundallah.”

HTS-affiliated media have in recent days circulated images of “religious classes” that Jundallah fighters had been forced to take, allegedly to “reduce their extremism.”

If these forces have been making their way to Iraq and are now playing a part in attacks attributed to IS, this would mean that ratlines have been solidified and networks are likely in place to bring in more foreign fighters that are “too extreme” to live under the yoke of HTS in Idlib or who have grown concerned about possibly being targeted there.

Meanwhile, The Guardian published a report Nov. 22 based on interviews with prisoners released from jails run by the US-backed, Kurdish-led Syrian Democratic Forces (SDF) in northeastern Syria who had had links to IS and said that they had been released in exchange for money under a “reconciliation” scheme.

SDF-held territory lies between Idlib and the Iraqi border.

The SDF did not respond to questions on the testimony given by the former prisoners but said that a document the UK-based daily had seen on the same issue was fake, the UK-based publication noted.

Al-Monitor has never seen documentation of any such payment or official scheme. However, this journalist has consistently and over a period of several years heard allegations from inhabitants of local Syria tribes that former IS commanders and others affiliated with the group were being released for money, with some then working directly with the SDF to exert its control over the local population, especially in the almost entirely Arab province of Deir ez-Zor.

These persistent claims have been difficult to verify, in large part due to the Kurdish-led SDF’s insistence on the use of translators affiliated with it within territory under its control. It also regularly shuts down or does not investigate suspicious attacks on Kurdish media outlets that publish reports it sees as being critical of it.

This journalist is one of the few who has reported independently from Deir ez-Zor, both in 2019 and 2020, relying entirely on longstanding local contacts and their networks to move around instead of being accompanied by armed Kurdish SDF fighters and/or translators who report back to them.

If well-connected, highly trained former IS leaders now have freedom of movement and are able to facilitate the movement of jihadis simply by paying off local authorities, this will create serious security issues on both sides of the border.

As of late 2020, the SDF was holding at least 10,000 IS prisoners in approximately 14 detention centers.

A source from eastern Syria told Al-Monitor Nov. 13 that one prison upon which an attack was thwarted last month continues to host many high-value Iraqi IS leaders, including several who had direct contact with Baghdadi.

Iraqi security officers frequently report arrests of people who have crossed illegally into the country from its western border with SDF-held territory.

Security analyst Alex Almeida tweeted Dec. 6: “Several hundred ISIS [IS] & families were picked up crossing into Iraq in western Ninawa since Q2. Also reports of stepped thru traffic at key transit hubs on the ISIS ratline system and more recently of platoon-sized ISIS cells arriving in the Qara Chaugh [Qarachogh] and Kifri-Pulkana."

Within Iraq itself, longstanding problems of security gaps and/or lack of coordination between forces under Baghdad and those under Erbil continue to be exploited by IS cells.

When this journalist reported from Qarachogh in 2019, villagers had been leaving the area after IS burned crops and repeatedly threatened them. There was at that time a clear security gap between the peshmerga and Iraq's security forces.

A Dec. 3 statement by the KRG stressed that “the federal government needs to cooperate with the peshmerga.”

The government-linked Iraqi Media Security Cell on the same day tweeted that the Joint Operations Command “confirms that a high level of coordination and cooperation continues.”