The Islamic State continues to target local tribes and others in desert areas of Iraq and across the border in Syria, as more Iraqi nationals with alleged IS links are moved to an IDP camp in northwestern Iraq. 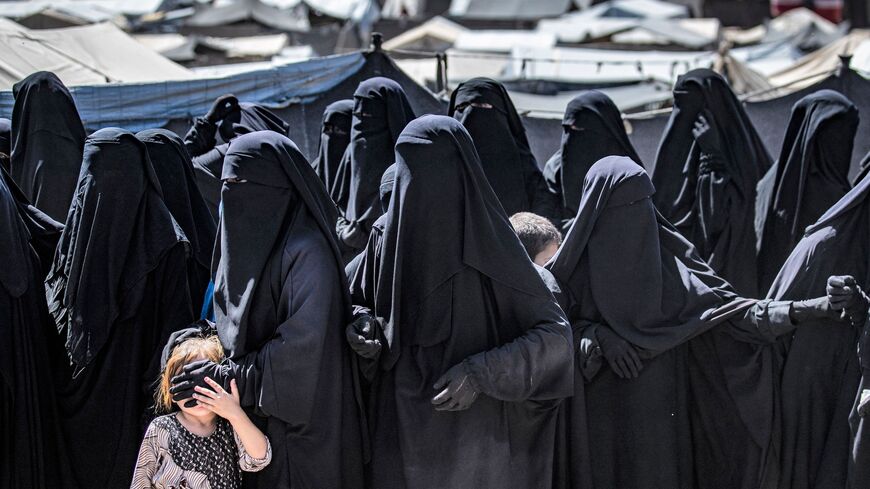 Five years after victory was announced by Iraqi security forces in the Battle for Mosul against the Islamic State (IS) in July 2017, Iraq’s Ninevah province watches warily as remnants of the international terrorist group continue to conduct sporadic attacks and operate within desert areas not far from the Syrian border.

In late June, IS claimed responsibility for the kidnapping and summary execution in a desert area of Ninevah of a man from the Jughayfa tribe they claimed was a member of the Iraqi security forces.

A member of his tribe contacted by Al-Monitor said the man killed was actually a shepherd but had close relatives within the security forces. The Jughayfa tribe is known for withstanding an IS siege for over a year in the city of Haditha in Anbar province. Multiple fighters from the tribe have since been killed by IS in retaliation, including on video.

The adjacent Anbar and Ninevah provinces both contain vast desert areas and strong tribal links, along with a long porous border with Syria and routes used by IS. Wadi al-Tharthar, for example, which starts from headstreams in the Sinjar Mountains west of Mosul and flows southward to Lake Tharthar between the Anbar and Salahuddin provinces, has long been known for its IS "ratlines."

On June 30, Iraqi military intelligence reported that they had arrested the IS head of military operations for southern Mosul — a man known by the name Abu Falah — and that they had thwarted his attempt to enter a camp that is being used to house Iraqi nationals recently brought back from Syria after years of being kept in the al-Hol detention camp run by the Kurdish-led administration across the border in northeastern Syria.

Al-Hol camp currently contains over 50,000 people, over half of whom are Iraqi nationals. Most of those housed in the camp are believed to have family or other ties to IS.

Abu Falah had reportedly planned to enter the Jada camp in Ninevah, where Iraqi nationals repatriated over the past year have initially been placed. Many are later sent back to their home provinces in the country.

The plan to house the Iraqi returnees in this camp had been hotly debated for years, with many local Ninevah officials strongly against the idea, as this Al-Monitor correspondent reported in 2019.

One of the officials interviewed by Al-Monitor at that time — Gen. Najm al-Jabouri, former Ninevah operations commander and governor of the province since 2020 — continued to voice strong opposition to the plan even in mid-2021, shortly before these long-postponed repatriations began.

Thousands of Iraqis have been repatriated this year. Most are women and children. These repatriations will continue in the coming months.

“From July 1 until July 5, as per an agreement between the Iraqi government and the Syrian Democratic Forces, 150 families, which account for around 600 people, are set to be brought to Jada-1 camp near Mosul in Ninevah province from al-Hol camp,” Nineveh Deputy Gov. Rafaat Smo told the Kurdistan Region of Iraq media outlet Rudaw in June.

The Lead Inspector General Report to the US Congress on the first quarter of 2022 stated that “at the current pace, it will take nearly 15 years to repatriate all the Iraqis at the camp.”

The Kurdish-led, US-backed Syrian Democratic Forces (SDF) took the last urban area held by IS from the group in the eastern part of Deir ez-Zor province in early 2019.

Iraq declared victory against IS in December 2017 after retaking the last two cities in its western Anbar province near the Syrian border. Many IS fighters and their families and others fled western Iraq into the eastern part of Syria’s Deir ez-Zor province during the fighting.

Scores of Iraqi nationals who had allegedly taken an active part in IS terrorist activities have also been transferred from northeastern Syria to Iraq this year and will be investigated and then prosecuted.

A major jailbreak in the same Syrian province as the camp, Hasakah, in late January significantly increased security threats to the region.

Al-Hol camp has for years been seen as a potential "time-bomb," with children subject to indoctrination by IS supporters amid extremely poor living conditions and frequent violence.

According to the Rojava Information Center, close to the Kurdish-led administration of northeastern Syria, at least eight people were killed in al-Hol camp in June, with an "unusually high amount of murders” during the last week of June.

It noted that three women had been killed in the Iraqi and Syrian sections of the camp, two of whom had been decapitated, and a man was shot dead on June 28. Another woman, it said, had been shot in the head but survived.

Local officials in the Kurdish-led administration in northeastern Syria in June expressed concern after members of a local Arab armed faction affiliated with the US-backed, Kurdish-led SDF were targeted.

According to the local media outlet North Press Agency (NPA), which is close to the Kurdish-led administration in northeastern Syria, three members of the Sanadid forces made up mostly of members of the Shammar tribe — the largest in that area — were killed and four others injured when gunmen riding a motorcycle opened fire on them.

IS’s Amaq New Agency claimed responsibility for the attack, saying that it had killed four members of the Arab tribal faction near the Syrian-Iraqi border.

The taking of Mosul, the capital of Iraq’s Ninevah province, in June 2014 caught many by surprise and shaped much of what was to come in subsequent years. Mosul was where former IS chief Abu Bakr al-Baghdadi proclaimed the "caliphate."

Though IS had initially used the chaos of the Syrian conflict to bring in foreign recruits and bulk up its forces, the taking of Mosul in 2014 enabled it to garner massive amounts of weaponry and vehicles, which it later used to take other areas of eastern Syria held by local forces opposed to the government in Damascus that had previously managed to hold off attacks by the international terrorist group as well.

The combat mission of the US-led international coalition against IS ended its combat mission in Iraq last year but continues across the border in eastern Syria.

Coalition officials contacted by Al-Monitor have for several years stated that IS capabilities in Iraq have been degraded to the point of no longer being able to hold territory in Iraq.

Recent IS propaganda has made frequent reference to its Africa operations, and the anti-IS coalition recently described IS operations in Africa as one of its top concerns.

However, sleeper cells continue to operate in Iraq and the leader of the group has always been an Iraqi.

Since the beginning of the year, analysts say that over half of attacks claimed by IS have been conducted in Africa, but that Iraq remains the province in which the international terrorist group remains the most active.