Iraq’s new government is rethinking how to deal with the thousands of Iraqis stuck for years in northeastern Syria's al-Hol camp. 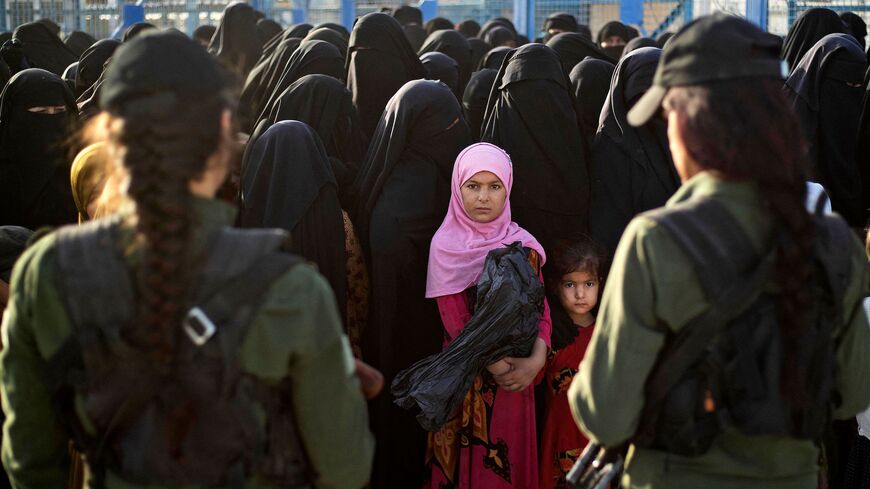 A picture shows the Kurdish-run al-Hol camp, which holds relatives of suspected Islamic State fighters in northeastern Syria's Hasakeh governorate, during a security operation by the Kurdish Asayish security forces and the special forces of the Syrian Democratic Forces, on Aug. 26, 2022. - DELIL SOULEIMAN/AFP via Getty Images

ERBIL — Iraq’s new government seems to be taking the issue of thousands of its citizens still in a camp across the border in Syria seriously and has focused on it in meetings in the very first days of its mandate.

Exactly when it plans to bring most of them home and how it will reintegrate them, especially given the stigma attached to their perceived or actual ties to former Islamic State fighters, is not for the moment clear.

After the government under Prime Minister Mohammed Shia al-Sudani was sworn in Oct. 27, on Nov. 2 Minister of Migration and Displacement Evan Faeq suspended the return of displaced Iraqis from the Syrian al-Hol camp.

Faeq, who held the same position in former Prime Minister Mustafa al-Kadhimi’s government, said that she was suspending the repatriations until “a new mechanism” for their return and reintegration is created.

A statement released afterward noted, “During the meeting, the prime minister assessed the situation of al-Hol camp since it compromises both humanitarian and security aspects and assigned duties to the relevant bodies in order to expedite the resolution of this issue.”

During a conference in Baghdad last April, Iraq’s national security adviser Qassem Al-Araji urged foreign governments to repatriate their citizens from al-Hol, saying that with “each day that passes with the camp still there, hate grows and terrorism thrives."

The UN stated in October, “Women and children under the age of 17 make up about 93% of the 55,000 inhabitants. The center accommodates approximately 60 different nationalities. Most are Syrian (34%) and Iraqi (52%).”

There are no official figures available on the number of people still in al-Hol and many there have no identification documents.

In October, Iraq reportedly brought back over 600 of its nationals from across the border.

The Lead Inspector General Report to the US Congress in the first quarter of 2022 claimed, “At the current pace, it will take nearly 15 years to repatriate all the Iraqis at the camp.”

Since the repatriations from al-Hol started in mid-2021, Iraqi returnees have been placed temporarily in camps south of Mosul in Iraq’s northwestern province of Nineveh in preparation for returning to their home communities.

Nineveh province borders Syria. On the other side is Hasakah province of eastern Syria, where the al-Hol camp is located.

Since the plan was first announced, multiple officials and community leaders from Nineveh have expressed concerns to Al-Monitor about such a large number of people with perceived or actual links to IS being placed in an area that is still struggling to recover from years under IS rule and the destruction wrought by the fight to retake it.

Saad al-Khalidy, director of the Baghdad-based Iraqi Center for Negotiation Skills and Conflict Management, told Al-Monitor that he is currently dealing with the case of two adolescent boys from Nineveh province who were found guilty of joining IS as minors, sentenced to three years of detention in Iraq, served their sentence and were recently released.

He said that members of their community threatened to kill them if they return and they will never shake their terrorist image. He personally believes they should be sent somewhere no one knows them for at least a while.

He cautioned that sending families back to areas where no one “will accept them" means that no one "will protect them from possible revenge actions.”

The Hague-based International Centre for Counter-Terrorism organized a series of round table discussions earlier this year on prosecution, rehabilitation and reintegration for government institutions in Iraq in partnership with the IOM and the office of Iraq's national security adviser.

The ICC noted on its website, “In contrast to the majority of states, who are largely unwilling to repatriate their nationals from NES, Iraq has publicly committed to repatriating all Iraqis from [northeast Syria] and since May 2021 has been proactively taking steps to fulfill its obligations to do so.”

Iraq declared victory against IS in December 2017 after retaking the last two cities in its western Anbar province near the Syrian border. Many IS fighters and their families and others fled western Iraq into the eastern part of Syria’s Deir ez-Zor province during the fighting, then under IS and now under the US-backed, Kurdish-led Autonomous Administration of North and East Syria (AANES).

A Save the Children report noted earlier this year, “During the final offensive against [IS] in Hajin and Baghouz in early 2019, the camp’s population skyrocketed from approximately 9,800 people to over 73,000 people.”

The International Committee of the Red Cross stated in September that as of mid-2022 there were more than 58,000 people in al-Hol, “the largest of the camps, 70% of whom are children,” adding, “The humanitarian situation in Northeast Syria is untenable: basic conditions are deteriorating both inside and outside of camps and places of detention.”

A major jailbreak in late January led to hundreds of alleged IS fighters escaping from a prison in Syria’s Hasakah province, significantly increasing security threats to the region.

Meanwhile, multiple Iraqi nationals have been killed in the vast confusion of the sprawling al-Hol camp, including women found with gunshot wounds to their heads. Others have been beheaded.

A Save the Children report issued in April stated that al-Hol was “per capita, one of the most dangerous places in the world to be a child.”

According to the US Central Command, a 24-day clearing operation that began in late August led to the arrest of approximately 300 IS operatives by the US-backed Syrian Democratic Forces in al-Hol.

Last month, a US media outlet quoted senior officials in the Biden administration as saying that a new plan would see the US working alongside other countries to speed up the sluggish repatriation of foreign nationals from the al-Hol camp in northeastern Syria, with a “main focus” on Iraq.

The report added that six European countries and Australia had agreed to transport dozens of their citizens to their home countries “in the coming weeks.”

The US government is offering other countries support for repatriating their citizens, NBC news reported, such as “transporting al-Hol residents out of northeast Syria on US military aircraft.”