The Islamic State sees the tens of thousands of detainees at al-Hol and other prison facilities in Syria as key to rebuilding its army, US officials have said. 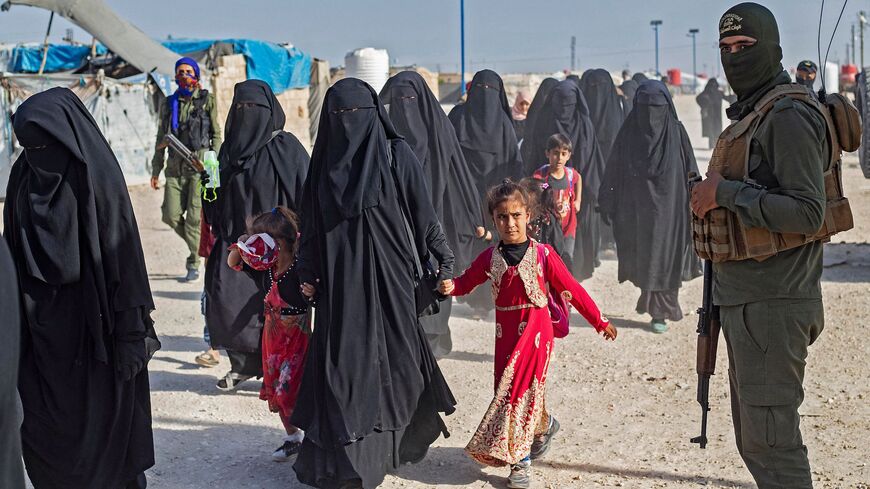 A picture shows the Kurdish-run al-Hol camp, which holds relatives of suspected Islamic State fighters in the northeastern Hasakah governorate, during a security operation by the Kurdish Asayish security forces and the special forces of the Syrian Democratic Forces, on Aug. 26, 2022. - DELIL SOULEIMAN/AFP via Getty Images

WASHINGTON — Iraqi officials transferred 580 former residents of the al-Hol detention camp in northeast Syria to a rehabilitation camp in northern Iraq on Saturday, the US military said Wednesday, marking the latest step in efforts to repatriate suspected Islamic State (IS) relatives to their home countries.

Some 142 Iraqi families previously held at al-Hol were transferred to the Jeddah-1 rehabilitation camp south of Mosul in the country's Ninevah province, according to US Central Command.

Why it matters: The Biden administration has been quietly pressing other countries to bring back their citizens from al-Hol, which houses some 54,000 suspected relatives of IS fighters in squalid conditions.

Most al-Hol internees surrendered to the US-backed, Kurdish-led Syrian Democratic Forces (SDF) during the final ground campaign that defeated IS’ so-called caliphate in eastern Syria in the spring of 2019.

The majority of detainees are Syrians and Iraqis, though approximately 10,000 women and children from some 60 other countries around the world are housed in a separate camp annex, according to estimates cited by the US State Department.

More than half of al-Hol’s population is under the age of 12, US officials have said. Other Syrian women and children are detained at the al-Roj camp, while an additional 10,000 men — suspected IS fighters — remain in more than 20 other makeshift prisons across Kurdish-held northeast Syria.

The Pentagon has long described the situation as untenable.

Gen. Michael “Erik” Kurilla, the commander of all US forces in the Middle East, called al-Hol “a humanitarian catastrophe” and “a literal breeding ground for the next generation of ISIS” after a visit to the site in September.

“We know that ISIS continues to have its eyes on these detainees and sees them as the path to reconstituting and resurging across the Middle East,” Dana Stroul, the Pentagon’s top Middle East policy official, told reporters last week.

The SDF thwarted what the US military described as a major breakout attempt by IS operatives armed with at least two car bombs and suicide vests in September.

The botched operation came on the heels of a series of SDF raids into the camp in which Kurdish-led fighters rounded up hundreds of suspected hardcore jihadi operatives believed to be running a network of informants and enforcers among al-Hol’s population.

Last January, hundreds of jihadis attacked the al-Sinaa prison housing detained IS fighters in the city of Hasakah. The resulting street battles left more than 340 IS fighters and more than 120 SDF members dead, the SDF said.

Know more: Iraq has led the way in the slow trickle of repatriations from al-Hol, but humanitarian workers have raised concerns about the process, which has been carried out with little transparency and fueled tensions with local communities in Ninevah province.

The SDF-backed governance structure that runs northeast Syria, which calls itself the Autonomous Administration, has repeatedly called for the establishment of international war crimes tribunals to try IS detainees.

Nearly four years since the defeat of IS on the battlefield, there is little international will to try detainees.

For that reason, the Biden administration says it has no plans to withdraw its roughly 900 troops from Syria or some 2,000 troops from Iraq for the foreseeable future.

“We must stay the course: Continue to work with the coalition in supporting the SDF to maintain custody of these detainees in a secure and humane manner,” Stroul told reporters last week.