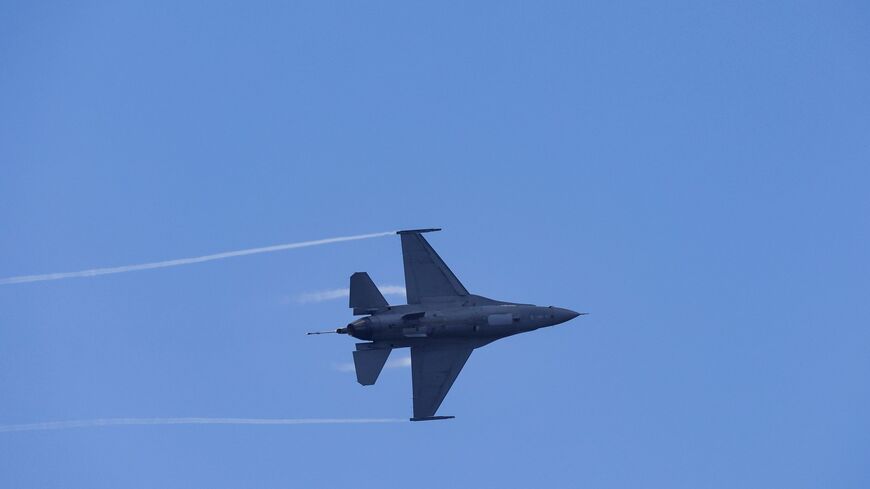 A Belgian F-16 fighter jet takes part in NATO exercises at the Kleine-Brogel air base in Belgium on Oct. 18, 2022. - KENZO TRIBOUILLARD/AFP via Getty Images

“We expect the approval.” That was the message Turkish Foreign Minister Mevlut Cavusoglu delivered to Washington on Wednesday as the Biden administration prepares to seek Congress’ greenlight for a potential $20 billion dollar sale of F-16 fighter jets to Turkey.

"The administration should not waste such an important deal between two allies just because one person or a few people are blocking it. It should not bow down,” Cavusoglu told reporters after his meeting with Secretary of State Antony Blinken.

The possible sale of F-16s has been met with resistance in Congress, where lawmakers on both sides of the aisle are concerned by Ankara’s slide toward authoritarianism under Turkish President Recep Tayyip Erdogan, and its refusal to approve Finland and Sweden’s NATO bids.

Last week, the State Department informally notified US lawmakers it would seek their approval for the prospective sale, which would reportedly include 40 new F-16s and 79 upgrade kits for Turkey's existing fleet of the Lockheed Martin-made jets. The proposed arms sale, which was first reported by The Wall Street Journal, is in the informal review period, during which members of Congress can request briefings from the administration and raise any objections.

Senate Foreign Relations Committee chairman Bob Menendez, the top Senate Democrat with oversight on arms sales, has voiced strong opposition to the proposal and could place an informal hold on the multibillion dollar package.

In a statement late Friday, the New Jersey Democrat vowed not to approve the F-16s “until Erdogan ceases his threats, improves his human rights record at home — including by releasing journalists and political opposition — and begins to act like a trusted ally should.”

Menendez is hardly alone in his opposition, but some lawmakers could be swayed if Turkey ratifies Sweden and Finland’s NATO bids, which it has so far resisted doing over concerns the two Nordic countries are harboring Kurdish separatists and others Ankara deems “terrorists.”

“If Cavusoglu has told Blinken that Ankara will ratify, and Blinken has his word that Turkey will move on this, then I think the administration might go to bat and say, 'look, this is a done deal,'" said Soner Cagaptay, director of the Turkish Research Program at the Washington Institute.

But, he added, “Even then I'm not holding my breath on Menendez lifting his veto.”

Support for Turkey has waned on Capitol Hill, including over its deepening ties to Russia, continued provocations against Greece and multiple military campaigns against US-backed Kurdish forces in northeast Syria.

Sinam Mohamad, the Washington envoy for the Syrian Democratic Forces' political arm, told The Takeaway she feared the fighter jets “will be used against the people of North and East Syria and the US allied-SDF leadership.”

The administration’s consultations with Congress come as Turkey gears up to hold crucial presidential and parliamentary elections in mid-May, as Nazlan Ertan reports. Erdogan is seeking to extend his 20-year grip on power in a vote that some analysts warn could be neither free nor fair.

“Erdogan might pull a January 6,” said Merve Tahiroglu, the Turkey program director at the Project on Middle East Democracy in Washington. “How would [the Biden administration] feel if in just three months, Turkey has its first unfree election in decades … and they have sold the F-16 to Turkey just months before?”

An American prisoner’s hunger strike in Iran has renewed pressure on the Biden administration to cut a deal with Tehran that would free several US citizens held in Iranian custody.

“An agreement on prisoner exchanges is very close,” a spokesperson for the Iranian Mission to the United Nations told Al-Monitor on Tuesday. It “has the potential to happen if the US government has the political will.” Asked about the status of indirect talks over the prisoners, a State Department spokesperson said “those channels remain open.” Read my full story here.

Iraq completed the transfer of 580 people from northeast Syria to a rehabilitation camp south of the Iraqi city of Mosul, the US military said Wednesday.

The sprawling Al-Hol camp in northern Syria houses tens of thousands of Islamic State-linked women and children, and experts have long warned it could serve as a breeding ground for a new generation of ISIS adherents. More than half of Al-Hol’s residents are children under the age of 12.

As Jared Szuba reports, “The Biden administration has been quietly pressing other countries to bring back their citizens from al-Hol, which houses some 54,000 suspected relatives of IS fighters in squalid conditions.”

The push appears to be paying off. Reuters reported that a record number of Al-Hol and Roj camp’s foreign women and children were returned to their home countries in 2022, including more than 100 from France and over 50 from Germany. Earlier this month, the State Department welcomed Spain’s repatriation of two women and thirteen children from northeast Syria.

• Ben Caspit examines how Israel's incoming IDF Chief of Staff Hezri Halevi will respond to the new Israeli government’s plans to hand over control of certain military and police units to hard-line politicians.

• Ibrahim Ayyad reports on the state of child marriage in Egypt following the public outcry that followed the engagement of two children in Sharqia governorate.

• Al-Monitor/Premise poll found that 68% of respondents in five countries across the Middle East and North Africa worried about their ability to access food.

• In his latest PRO memo, Gerald Kepes looks at whether OPEC+ is losing influence over production and prices.