Turkey's Erdogan shows no give on Sweden’s NATO bid

The hope is that the Turkish president will deal on NATO, Sweden and Syria after May 14 elections; Turkey-Syria talks unsettle refugees; Could jihadists make a comeback in Europe? 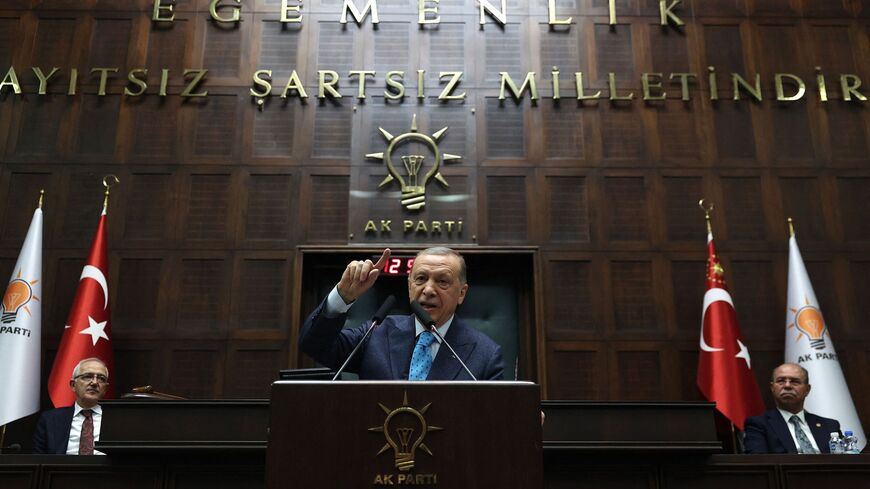 Turkish President and leader of the Justice and Development Party (AKP) Recep Tayyip Erdogan speaks during a group meeting at the Turkish Grand National Assembly in Ankara on Jan. 18, 2023. - ADEM ALTAN/AFP via Getty Images

No quid pro quo for US F-16s, says Turkish FM

Turkish President Recep Tayyip Erdogan has seized opportunity in the crisis that is the Ukraine war: leveraging his star turn as mediator between Moscow and Kyiv, flirting with rapprochement with Syria, rebuilding ties with Israel and the Gulf, and trying to steady US-Turkey relations.

His actions come across as both urgent and purposeful, given a difficult economy and elections now slated for May 14, as Nazlan Ertan reports.

The opposition coalition has yet to name a candidate, and an expected close race seems increasingly to tilt, if slightly, in Erdogan’s favor.

Such was the context last week when Turkey’s Foreign Minister Mevlut Cavusoglu came to Washington for meetings with US Secretary of State Antony Blinken.

The Biden administration has proposed selling F-16 fighter jets to Turkey, in return, unofficially, and not as a condition, for Ankara approving Sweden’s membership bid for NATO.

If that’s not the official deal, it is the expectation in Washington. Erdogan is at ease, however, with high-stakes diplomacy. He is flashing no sign that he buys into the linkage, at least not now, and certainly not before the election.

“The two issues are separate and are running their own course,” said Cavusoglu on Wednesday, adding that Turkey will consider the membership bids of both Finland and Sweden in the steps laid out in the trilateral memorandum from June 2022, such as cracking down on anti-Turkish militant groups, extraditing dozens of people and lifting all bans on arms sales to Turkey.

All NATO member parliaments must approve the membership bids, and Turkey is the last holdout.

While Ankara is expected to approve Finland’s request, Cavusoglu said, “Sweden is only at the beginning of the road” in meeting the conditions in the memorandum.

The Turkish foreign minister also seemed unmoved by opposition to the F-16 sale from, among others, US Senator Robert Menendez (D-NJ), chairman of the Foreign Relations Committee. Menendez is linking his support to an improvement in Turkey’s human rights record, as Elizabeth Hagedorn reports.

The Biden administration, said Cavusoglu, “should not bow down” to objections from a few critics on the Hill.

The takeaway from the visit is that both Washington and Ankara seek to keep often-fractious relations as steady as possible until after the May 14 elections.

“We haven’t come to the actual negotiation phase on these accounts, and everyone is collecting and dangling their cards,” said Asli Aydintasbas, visiting fellow in foreign policy at the Brookings Institution in Washington. “There will be no serious discussions on the F-16s or NATO membership or much else until after the elections.”

Exclusive Polling on Turkey: Check out our Al-Monitor-Premise polls on the Turkish election and how people in Turkey, and elsewhere in the Middle East, view the food security crisis resulting from the Ukraine war.

Although a rapprochement between Erdogan and Syrian President Bashar al-Assad does not appear imminent, the uptick in official talks has unsettled many of the 3.5 million Syrian refugees in Turkey and rebel armed groups, including those backed by Ankara.

The refugees are uneasy about increasing anti-refugee sentiment in Turkey, and the prospect of perhaps forced repatriation to Syria, if there is a Turkey-Syria agreement, as Joshua Levkovitz reports.

Rebels linked to the Turkish-backed Syrian National Army also wonder if their patron could withdraw and leave them vulnerable to Assad’s forces. Hayat Tahrir al-Sham (HTS), the jihadi outfit with origins in Al-Qaeda, and which holds sway in Idlib, has tried to capitalize on the uncertainty to expand its influence as the only bona fide nationalist force, as Fehim Tastekin reports.

Marita Kassis reports here on the fighting this week between Russian-backed Syrian government forces and both HTS and Ahrar Al Sham, another jihadist group, in Idlib and Aleppo provinces.

“We want peace,” said Kobane. “But should we be attacked, we will fight with all our might.”

“The Syrian space is heating up in many ways, with the clashes among the many forces on the ground,” said Aydintasbas. “While volatile, the signs don’t seem to point to an imminent incursion by Turkey, but it can change.”

The Biden Administration has repeatedly called for Turkey to refrain from an incursion, and this was conveyed to Cavusoglu in Washington. Like the F-16 sale and NATO expansion, Erdogan is likely to defer his next move in Syria until after May, as talks continue with Washington on a Syrian roadmap.

One outcome of a possible Turkey-Syria deal could be a return of battle-hardened Syrian jihadists to Turkey and Europe, writes Tastekin.

And Gilles Kepel, now writing for Al-Monitor, speculates that what happens in Syria can’t be de-linked from Ukraine, raising the specter of a possible new wave of terrorism to Europe.

“The main worry ahead now lies in the protracted consequences of the Ukraine war, which was dubbed a holy jihad by some Chechens fighting alongside Moscow,” writes Kepel. “It might develop into violence against Kyiv's Western allies if the Turkish-Syrian border would be further destabilized in the run-up to the Turkish presidential elections due on May 14.”