Not so fast: Erdogan still holds cards on NATO bids by Sweden, Finland

If conditions are not met, Turkey's president says it is "out of the question" that the Turkish parliament will take up Sweden and Finland's NATO membership issue; avoiding a further US-Turkish meltdown; is Syria invasion on hold? 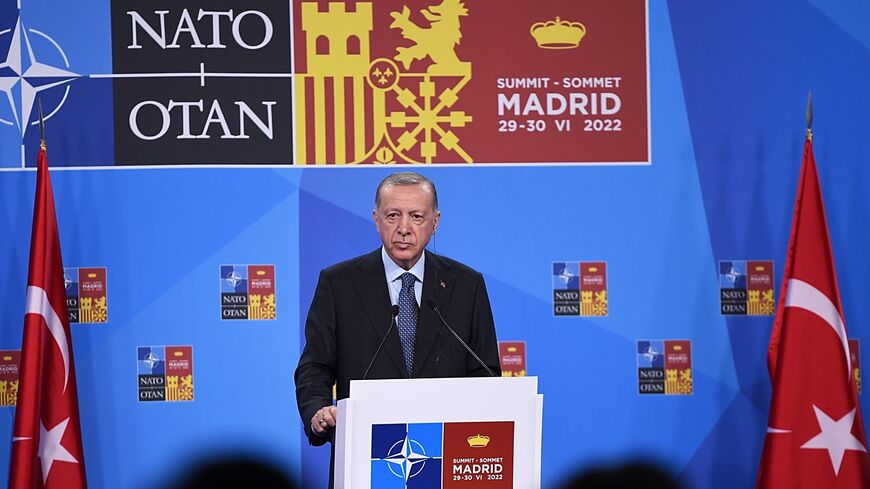 NATO announced this week with great fanfare that an agreement among Turkey, Sweden and Finland had "paved the way" for Finnish and Swedish membership bids, breaking a monthslong impasse.

As we reported here Wednesday however, the "trilateral agreement" reached in Madrid hardly makes membership a done deal: it merely allows invitations to be extended, and in the process codifies Turkey’s conditions for membership.

"In between the lines, the text unequivocally addresses almost every single point raised by the Turkish side in its objections to Sweden and Finland's NATO bids," writes Cengiz Candar. "In addition to its wording, the overriding spirit of the document favors the Turkish approach."

The trilateral agreement commits Sweden and Finland to significant changes of laws and policies, in addition to likely contentious disagreements over extradition requests.

The agreement, signed on June 28, establishes a "joint mechanism" for implementation of "concrete steps" for Turkey’s approval of Swedish and Finnish membership, including deportation and extradition requests of as many as 73 "terror suspects" wanted by Turkey affiliated with the Kurdistan Workers Party (PKK), People Protection Units (YPG), Democratic Union Party (PYD), and Fetullahist Terrorist Organization (FETO); the enforcement and application of new provisions in Finland’s Criminal Code and Sweden’s Terrorist Offenses Act to these groups; and adjusting Swedish and Finnish laws to allow arms sales and exports to Turkey.

This is hardly a green light from the Turkish side, and the provisions may not be so easily enacted.

"It remains to be seen whether Finnish and Swedish prosecutors see eye to eye with Turkey on what defines a terrorist, and there are already loud grumbles from left-wing parties in Sweden," writes Amberin Zaman. "One is pressing for delisting the PKK as a terrorist outfit."

Swedish Foreign Minister Ann Linde has been on the defensive since signing the agreement, her government accused of caving to Erdogan’s demands.

“We will not agree to any extradition unless there is evidence that there has been terroristic activity,” Deutsche Welle quoted Linde. “Kurds do not have any reason to think their human rights or democratic rights are at stake.”

‘Sweden and Finland have to fulfill their duties,’ he said, adding that ‘the PKK/YPG/PYD and FETO terrorist organizations must be eradicated. They [Sweden and Finland] should complete legal regulations regarding the issue as soon as possible.”

There is also Kurdish-Swedish independent deputy Amineh Kakabaveh, who has called for a no-confidence vote against the government for its perceived sellout of the Kurds, who are a well-established constituency, including among left-wing parties. Kakabaveh is a pivotal member of a fragile governing coalition, and her tie-breaking vote in November 2021 allowed the coalition to survive a no-confidence vote.

"The angst that the memorandum has set off among the Swedes of Kurdish origin, meanwhile, is palpable," adds Candar. "The Kurds, who have garnered significant sympathy around the Swedish nation over the past decades and are considered a formidable ethnic lobby, now feel like they have been thrown under the bus by the Social Democrats and they — as traditional supporters of the Social Democrats — are now claiming to make the party 'pay dearly' in the upcoming elections scheduled for Sept. 11."

For new members to be brought into NATO, each of the 30 NATO member states  must ratify the accession protocols according to their own systems — usually by parliamentary approval (or Congress in the US). Once all approve, NATO chief Jens Stoltenberg then would invite Sweden and Finland to accede, which they do according to their own internal processes. As a last step, the US Department of State is notified.

So, simply put, NATO membership for Sweden and Finland depends on the approval of the Turkish parliament.

And in case you missed our take Wednesday, Erdogan has made clear several times over the past two days that he will be holding Sweden and Finland accountable for promises made in Madrid.

“The agreement that was signed is just a beginning, an invitation. What is of essence is that promises that were made are put into action,” Erdogan said at a news conference in Madrid on June 30 at the close of the NATO summit, as Zaman reports.

"This deal won’t materialize unless it's approved by our parliament,” Erdogan added. “Sweden and Finland must remain faithful to their pledges; otherwise, it is out of the question that [their memberships] would be brought before [the Turkish] parliament."

And Turkey is in no rush. A senior Turkish diplomat said that it "could take some time" before Sweden and Finland become NATO members. Turkey’s ratification process could stretch into 2023 depending on implementation of the trilateral agreement, the diplomat said. The parliament is in recess until October.

Turkey’s blocking of the NATO invitations to Sweden and Finland had contributed to already scratchy ties between Washington and Ankara.

While the official US position was to let the parties work it out among themselves, it was perhaps no surprise that US President Joe Biden called Erdogan on Tuesday morning — on the eve of the NATO summit and just hours before the trilateral agreement was signed.

Erdogan also got a meeting and high praise in Madrid from Biden , who said that "I want to particularly thank you for what you did putting together the situation with regard to Finland and Sweden, and all the incredible work you’re doing to try to get the grain out of Ukraine and Russia," Biden said. "I mean, you’re doing a great job."

And he also got a Biden commitment to support the sale of US F-16 fighter jets to Turkey, which could be held up or challenged in Congress.

Both US and Turkish official sources said there was no quid pro quo regarding the F-16 announcement and Turkey’s agreement to allow the invitations to Sweden and Finland.

Even so, by signing the trilateral agreement, "Turkey saved itself from a further meltdown in its relations with Washington," Zaman writes. "Had Erdogan not relented, the Biden administration would have pulled its support for the transfer of F-16 fighter jets to Turkey, which needs to be approved by Congress. Therefore, should Turkey revert to playing hardball on the Nordic accession, the administration could change its tune on the F-16s, as it may should Erdogan make good on his threats to invade northeast Syria again."

Erdogan may have also conceded at least a pause in what was widely considered a likely if not imminent military operation into northern Syria, as we reported here last month.

Erdogan’s possible rethink on Syria may not only be a result of US and NATO pressure, but also juggling numerous competing interests, including relations with Russia, Iran, Israel, and Saudi Arabia — all of which Erdogan has tried to keep in play with at times half steps and feints, given competing pressures and priorities.

Russia has advised against a Turkish military operation into Syria, and its president, Vladimir Putin, obviously was counting on Turkey to hold the line on the membership bids by Sweden and Finland. Erdogan, for his part, likes the spotlight as a potential mediator between Russia and Ukraine, and prefers to keep Putin in play, if he can, as he resets Turkey’s role in NATO.

Meanwhile, Erdogan has sought to limit antagonizing Iran as he manages shifts in policies toward Israel and Saudi Arabia.

Last month Erdogan separately received both the Iranian and Israeli foreign ministers as a Tehran-Jerusalem spy war played out on Turkish territory, as Amberin Zaman and  Ben Caspit report.

Iran, which like Russia backs the Syrian government and opposes a Turkish incursion into Iraq as well as Syria, has its own interests in keeping Turkey in play, as Tehran weighs the consequences of the deepening US security ties among the US, Israel, Saudi Arabia and the Gulf.