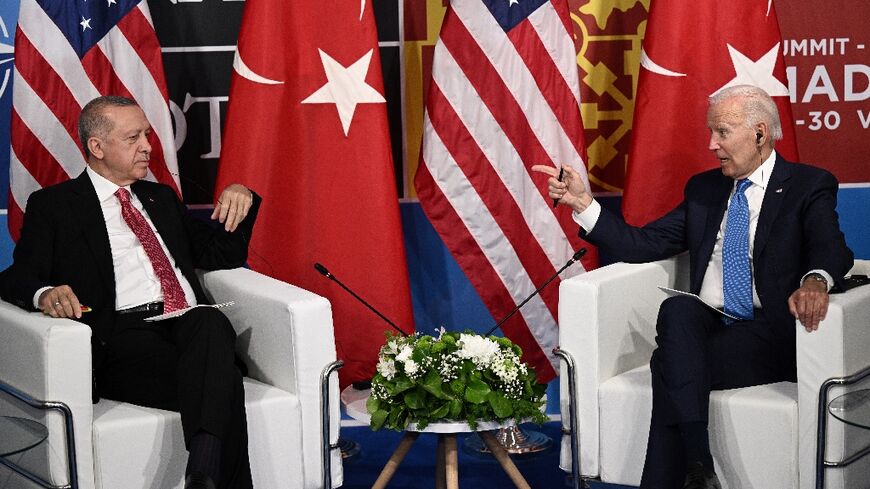 Turkey said Wednesday it would seek the extradition of 33 alleged Kurdish militants and coup plot suspects from Sweden and Finland under a deal to secure Ankara's support for the Nordic countries' NATO membership bids.

Erdogan emerged from Tuesday's talks declaring victory, after securing a 10-point agreement under which the two countries vowed to join Turkey's fight against banned Kurdish militants and to swiftly extradite suspects.

Turkey put the deal to the immediate test by announcing that it would seek the extradition of 12 suspects from Finland and 21 from Sweden.

"We ask them to fulfil their promises," Justice Minister Bekir Bozdag said in a statement.

The unnamed suspects were identified as being members of the outlawed Kurdistan Workers' Party (PKK) and a group led by a US-based Muslim preacher that Erdogan blames for a failed 2016 coup attempt.

The European Union and Washington both recognise the PKK as a "terrorist" organisation because of the brutal tactics it employed during a decades-long insurgency against the Turkish state.

But the agreement also stipulates that Sweden and Finland vow to "not provide support" to the YPG -- a PKK offshoot in Syria that played an instrumental role in the US-led alliance against the Islamic State group.

Sweden and Finland abandoned decades of military non-alignment in response to Russia's invasion of Ukraine and were formally invited into the alliance at Wednesday's summit in Madrid.

Their applications had appeared to be headed for swift approval until Erdogan stepped in.

The Turkish leader accused Finland and particularly Sweden of providing a haven to Kurdish fighters and financing terror.

Erdogan also wanted the two countries to lift arms embargoes they imposed in response to Turkey's 2019 military incursion into Syria.

The non-binding memorandum covers many of Erdogan's concerns.

Erdogan's office hailed the agreement as a full victory.

"Turkey got what it wanted," his office declared in a statement.

Erdogan also secured a long-sought meeting with US President Joe Biden on the sidelines of the NATO talks.

Washington further signalled support for Turkey's plans to buy F-16s warplanes that had been put on hold during the Erdogan's dispute with the two Nordic states.

Most of Turkey's demands and past negotiations have involved Sweden because of its more robust ties with the Kurdish diaspora.

Sweden keeps no official ethnicity statistics but is believed to have 100,000 Kurds living in the nation of 10 million people.

Stockholm recognised the PKK as a "terrorist" organisation in the 1980s but has adopted a more supportive stance toward the YPG.

Pro-government Turkish media were outraged by two meetings Swedish Foreign Minister Ann Linde held last year with Ilham Ahmad -- the leader of the political wing of the YPG-led forces that expelled IS from a large swathe of Syria.

Linde called her two meetings "good" and "fruitful" on Twitter.

It was not immediately apparent whose extradition Turkey is seeking.

But Finnish President Sauli Niinisto said Turkey appeared to be referring to cases that had already been turned down by the courts.

"I would guess that all of these cases have been solved in Finland. There are decisions made, and those decisions are partly made by our courts," he told reporters in Madrid.

"I see no reason to take them up again."

The Brookings Institution warned that additional problems may arise from Turkey's "loose and often aggressive framing" of the term "terrorist".

"The complication arises from a definition of terrorism in Turkish law that goes beyond criminalising participation in violent acts and infringes on basic freedom of speech," the US-based institute said in a report.