Following the signing of a memorandum between Turkey, Sweden, and Finland, Erdogan lifted his veto against the Nordic expansion of NATO hours before the Madrid summit started. 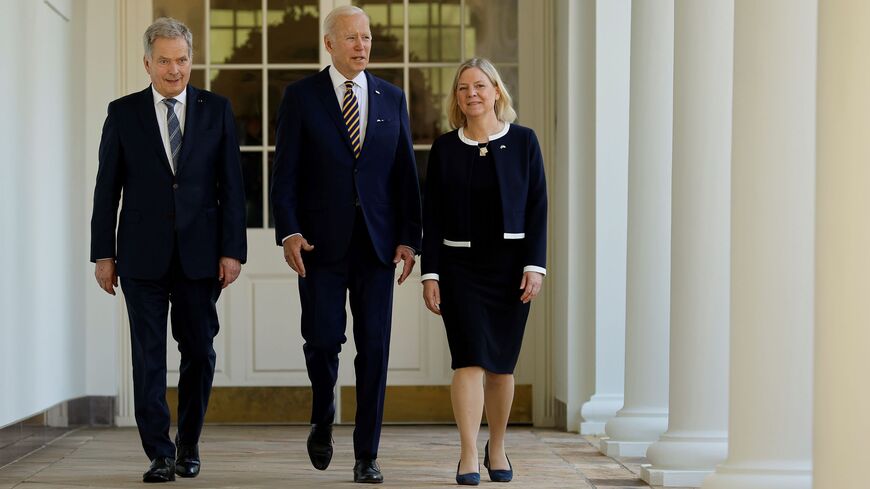 US President Joe Biden (C) walks with Finland's President Sauli Niinisto (L) and Sweden's Prime Minister Magdalena Andersson along the Rose Garden colonnade to a meeting at the White House on May 19, 2022 in Washington, DC. - Chip Somodevilla/Getty Images

After a day of phone diplomacy, conflicting statements, and last-minute political posturing, Turkey has given the nod to NATO hopefuls Sweden and Finland after signing a trilateral memorandum that addressed Ankara’s security concerns.

“I am pleased to announce that we have an agreement that paves the way for the accession of Sweden and Finland,” Stoltenberg told a press conference, explaining that Finland and Sweden have agreed to Turkey’s demands for amending their laws further to crack down on the outlawed Kurdistan Workers’ Party (PKK), work with Turkey on extraditions of people on Turkey’s wanted list and lift military embargoes on Ankara.

The Turkish reversal came after a phone conversation between Erdogan and US President Joe Biden on Tuesday morning. A US administration official told journalists in Madrid that the phone call came after Helsinki and Stockholm asked Biden to reach out to Erdogan.

The trilateral memorandum, a three-page, ten-point document, said that the two Nordic countries would extend their full support to Turkey on threats against national security. It explicitly stated that the two countries would not support YPG/PYD (Syrian Kurdish groups which Turkey considers offshoots of the PKK in Syria) or FETO, the organization headed by US-based cleric Fethullah Gulen which Ankara says directed the unsuccessful putsch in 2016.

Turkey’s green light to Finland and Sweden, two countries that have shed their long-standing neutrality, clears the way for NATO’s 30 members from Europe and North America to sign the accession protocol. Stoltenberg said that the accession protocol still needed to be ratified by members’ parliaments, but he was confident this would not be a problem.

Shortly before the signing of the memorandum, Turkey announced that bilateral talks between Turkey and Sweden would take place in Ankara tomorrow at the deputy foreign minister level. “During the consultations, bilateral relations will be discussed extensively along with Turkey-EU relations, and current regional and international issues,” a statement from the Foreign Ministry said.

There had been conflicting messages before the mini-summit. Both Finland and Sweden expressed optimism following their top bureaucrats' talks in Brussels a day ago. "The general view is that the discussions went somewhat better, which should mean that understanding has somewhat increased on both sides," Niinisto told reporters in Helsinki before heading to Madrid.

Niinisto’s optimism marked a sharp contrast from Erdogan, who remained inflexible as he boarded his plane Tuesday morning. “We emphasize our expectation since the beginning that the [Kurdistan Workers’ Party, or PKK], which threaten Turkey’s national interests, and all offshoots in Syria, especially the PYD and YPG, should be prevented from acting freely in these countries,” he told journalists. “We do not want empty words, we want results. We are sick of passing the ball around in mid-field.”

But, as of Tuesday morning, the main prize for Erdogan was the phone conversation — and the promise of a meeting in Madrid — with US President Joe Biden, who had pointedly kept a chilly relationship with his Turkish counterpart. Both diplomats and journalists felt that the intervention from the United States, whom Erdogan called the “Number One country of NATO” could help break the impasse.

“President Biden noted he looks forward to seeing President Erdogan at the NATO Summit in Madrid where leaders will discuss the consequences of Russia’s invasion of Ukraine for Transatlantic security and other threats to the Alliance such as terrorism, as well as take historic decisions to strengthen the Alliance’s collective defense and security,” a statement from the White House said.

“We spoke with Mr.Biden this morning, and he expressed his desire to get together tonight or tomorrow,” Erdogan told journalists as he left Turkey for the NATO summit Tuesday morning. “We said it is possible.” Erdogan is expected to meet Biden tomorrow morning, according to Turkish officials.

Turkey’s looming veto to Nordic enlargement came as the military alliance is set to adopt its 2022 Strategic Concept, which will guide it through the 2030s. The concept will set out NATO's joint positions, including on Russia and emerging challenges, and for the first time, it will also address China.

But for Erdogan, the Madrid Summit and the Nordic enlargement were also the moment to air his country’s grievances on the PKK and the US-backed armed Kurdish groups in Syria. Despite early claims that he would be persuaded well ahead of the summit, the Turkish president has been intransigent until the last.

“Erdogan’s intransigence is widely attributed to domestic political considerations, including a desperate need to divert attention from the dire state of Turkey’s economy as well as boosting his sagging poll ratings by playing to rampant nationalist and anti-Western feelings," Kemal Kirisci, a non-resident senior fellow of Brookings Institute, wrote a day before the summit. Another factor, he said, is Erdoğan’s own discomfort with Turkey’s Western orientation, symbolized by its membership in NATO as well as in the Council of Europe.

Erdogan — and his foreign minister, Mevlut Cavusoglu — mostly targeted Sweden, which has a sizable Kurdish community, few but vocal PKK members and sympathizers, and liberal laws on freedom of association and fund-raising. But Erdogan repeated Tuesday that Germany, the Netherlands and Greece had also been harboring terrorist groups against Turkey. He also criticized the United States for sending arms to Syrian groups and for opening nine military bases in Greece.

“The United States is the number one country of NATO. Truckloads of weapons came from the US. This morning, we had a talk with [Biden] but I will reiterate these to him during our meeting this evening or tomorrow. How come all these weapons are dispatched to the PKK/YPG while we are two partner countries within NATO that stand shoulder to shoulder,” he said. “Against whom are these weapons used? They are used against Turkey.”

Given Erdogan’s stance, the diplomatic efforts of Stoltenberg and other NATO allies such as the United Kingdom have been two-pronged. One pillar was trying to assure Turkey that Finland and Sweden have “sufficiently” met Turkey’s long list of demands.

The other, which is more complex, was to persuade Turkey that not just Finland and Sweden, but all NATO allies recognize the legitimacy of Turkey’s security concerns. As a concession, a special session on the security of the southern flank was added to the program of the Madrid Summit. The Turkish side is expected to bring documents, information, and images to this session. Erdogan said that he would express Turkey’s concerns and individual acts by allies, including by France and the United States, “one by one.”

On Monday, Stoltenberg and Andersson spoke at NATO headquarters to laud what Stoltenberg called a “paradigm shift” in Sweden’s attitude toward terrorism.

“You have already amended Swedish law. You have launched new police investigations against the PKK, and you are currently looking at Turkish extradition requests. These concrete steps represent a paradigm shift in Sweden’s approach to terrorism in a more dangerous and unpredictable world,” Stoltenberg told journalists with Andersson on his side.

Andersson maintained that Sweden has strengthened the laws against funding terrorism in the last few years. “Sweden’s terrorist legislation is undergoing its biggest overhaul in 30 years. A new and tougher Terrorist Offences Act enters into force on 1 July, with a broadened scope and higher scales of penalties. Constitutional amendments are being prepared which would pave the way for criminalization of participation in terrorist organizations,” she said.

Andersson also stated that her country’s stance regarding the PKK is crystal clear. “It is listed as a terror organization in the EU and is regarded as one by Sweden,” she said.

The Swedish prime minister sought to alleviate Turkey’s concerns about defense embargos and extraditions. “Our NATO membership will have implications with respect to export control of defense material to all NATO Allies. Alliance solidarity will be reflected within our national regulatory framework,” she said.

Extraditions, she said, “are handled swiftly and carefully by our legal system in accordance with European Convention on Extradition. … The relevant authorities work intensively in order to expel persons who could be a security threat.”

The local media reported a day ago that Turkey has asked for the extradition of 45 people from Sweden and Finland. These are not only members of the PKK but also members of FETO, and from two left-wing groups, TIKKO and DHKP-C.