Both Turkey's president and foreign minister tell the NATO secretary-general that steps from Sweden and Finland will determine the pace of Ankara’s ratification of the Nordic accession. 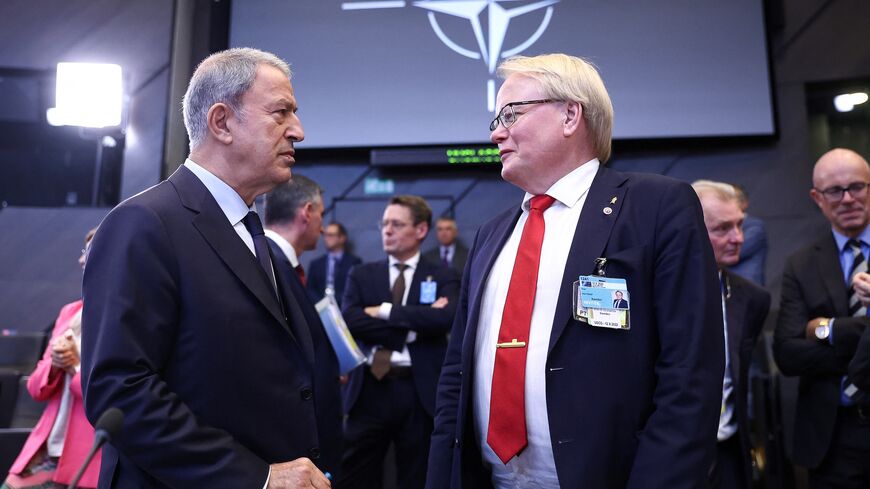 Turkish Defense Minister Hulusi Akar (L) speaks with Sweden's Defense Minister Peter Hultqvist ahead of the second day of a meeting of the alliance's defense ministers at the NATO headquarters in Brussels on Oct. 13, 2022. - KENZO TRIBOUILLARD/AFP via Getty Images

NATO Secretary General Jens Stoltenberg urged Turkey to ratify the accession of Sweden and Finland to NATO as soon as possible, saying those two countries had lived up to their obligations to address Turkey’s security concerns.

But Mevlut Cavusoglu, Turkey’s foreign minister, said that while progress was made, it was still impossible to say that Turkey’s conditions had been fully met. Cavusoglu, however, added that Turkey had a more positive outlook toward the new Swedish government and was looking forward to the visit of  Swedish Prime Minister Ulf Kristersson “in a few days.”

Stoltenberg is on a two-day visit to Turkey, the only country that has made no move to ratify the alliance’s Nordic expansion after Hungary said it would seek to seal the accession accord by mid-December. Stoltenberg will meet President Recep Tayyip Erdogan and Defense Minister Hulusi Akar on Friday for further talks.

“The pace and the finalization of the ratification” for the Nordic enlargement would depend on the steps taken by Sweden and Finland, a brief statement from the presidency said after the Erdogan-Stoltenberg meeting late Friday.

In a joint press conference with Cavusoglu Thursday, Stoltenberg said that in NATO’s Madrid summit in June, all allies made “a historic decision” to invite Finland and Sweden to join the alliance. Turkey, which had been shuffling its feet, lifted its blockade at the eleventh hour with a trilateral memorandum that addressed its security concerns.

The trilateral memorandum commits the two Nordic countries to extend their full support to Turkey on threats against its national security, including the outlawed Kurdistan Workers’ Party (PKK). It states that the two countries would not support YPG/PYD (Syrian Kurdish groups which Turkey considers offshoots of the PKK in Syria) or FETO, the organization headed by US-based cleric Fethullah Gulen, which Ankara says carried out the unsuccessful putsch in 2016. The two countries also promise “to work with Turkey” on extraditions of people on Turkey’s wanted list and lift military embargoes on Ankara.

“Finland and Sweden have delivered on their agreement with Turkey. ... It is time to welcome them as full members of NATO,” Stoltenberg said, and finalizing the accession is “even more important in these dangerous times to prevent any misunderstanding or miscalculation in Moscow.”

Aware that Ankara is more concerned with Sweden than Finland, Stoltenberg cited the “major, concrete” actions Sweden had taken, such as strengthening legislation that prohibited membership in terrorist organizations, including the PKK, launching new tools for financial controls, and sharing intelligence. He also hinted that the new legislation might enable some extraditions.

“The secretary-general was a key figure on the memorandum, and we thank him. Authorities of both countries are underlining their commitment to it, but what matters is the concrete fulfillment of the issues in the deal,” Cavusoglu said. “The new [Swedish] government is determined, and the new PM will come to Turkey and we will meet and talk."

Besides the visit of  Kristersson on Nov. 8, Cavusoglu also said that the next meeting of the trilateral mechanism will be in Stockholm later in November. “Some progress has been made, but we cannot say that all elements in the memorandum had been fulfilled,” he said, in a thinly veiled reference to Turkey’s extradition requests from Sweden.

Following the formation of the new government, Cavusoglu called his new counterpart Tobias Billstrom to congratulate him. Cavusoglu had criticized Sweden’s Foreign Minister Ann Linde and what he called her “so-called feminist policy” at a critical NATO meeting, attacking Linde’s embrace of the Syrian Kurdish leadership, which has strong female representation.

Many believe that Turkey, facing presidential and parliamentary elections next year, is unlikely to ratify the agreement before the end of the year, as Hungary announced it would do. However, Cavusoglu ducked the question, saying, “The pace depends on the steps of the two countries.”

On Wednesday, Finnish Prime Minister Sanna Marin said that all eyes were on Hungary and Turkey. “We are waiting for these countries to ratify our applications. I think it would be important that this would happen preferably sooner than later,” she said at a press conference following a Nordic Council.

Marin and Kristersson reiterated last week the two countries’ pledge to join the defense bloc together. The reiteration is important as Turkey has fewer problems with Finland than Sweden, which has a sizable and vocal Kurdish minority. However, Helsinki has repeatedly said that it would not detach its accession application from its neighbor.

“We do not have huge problems with Finland, but both countries and the secretary-general has asked to take the two applications together,” Mevlutoglu said at the press conference with Stoltenberg.

Since August, President Recep Tayyip Erdogan has repeatedly criticized Sweden for failing to deliver its promises, particularly on the extradition of about 30 people requested. Sweden made one extradition in August, but the case concerned fraud and not terrorism. In late September, Swedish authorities lifted a ban on military exports to Turkey, meeting another of Ankara's demands.

Ankara-Stockholm ties soured further in October when the Turkish Ministry of Foreign Affairs summoned Sweden’s envoy over  “disgraceful” comments about the Turkish president on Swedish state TV. The rebuke coincided with a Swedish delegation visit to Turkey today to discuss the implementation of the memorandum, particularly the extradition demands. Bekir Bozdag, Turkey’s defense minister, said his ministry renewed some extradition requests.

Kristersson, whose center-right government took office in mid-October, has been trying to break the impasse and persuade Turkey to proceed with the ratification. Paying a visit to NATO headquarters three days after taking office, Kristersson assured that his country would honor the agreement with Turkey and cooperate on fighting terrorism.

The newly elected premier told journalists that new legislation gives Sweden “more tools to prove in practice that we are delivering what we were promising.” Kristersson also sent a two-page letter to Erdogan, showing the 14 steps Sweden had taken to fulfill its obligation. The letter, dated Oct. 6,  said Sweden's security and counter-terrorism police "has intensified its work against the PKK" and "carried out new analyses of PKK's role in threats to Sweden's national security and in organized crime (and) this is likely to lead to concrete results.”