Sweden's steps to gain Erdogan's approval appear not to have "cut the ice" thus far. 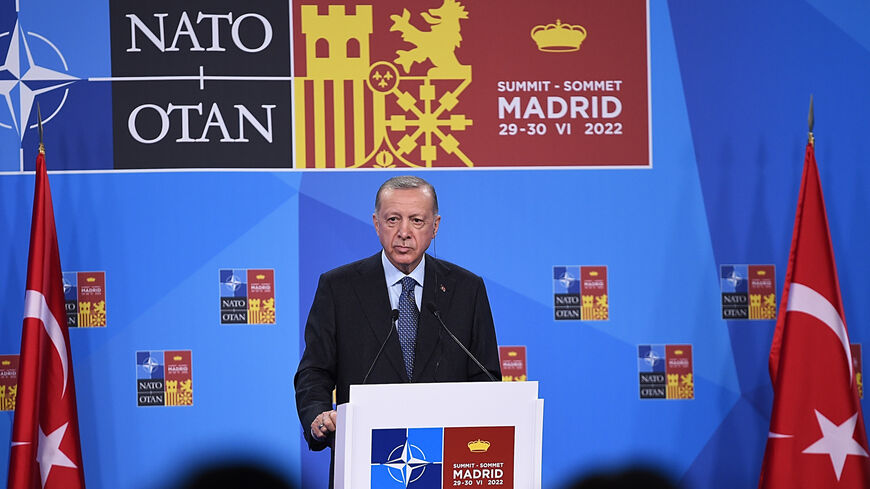 Ankara has accused Sweden yet again of failing to fulfill its commitments under a trilateral memorandum signed in June together with Finland, whereby Turkey would ratify the Nordic countries’ memberships into NATO if they addressed its concerns on terror-related issues.

Briefing reporters Monday after a meeting of the executive committee of the ruling Justice and Development Party (AKP), AKP spokesman Omer Celik said Sweden “makes very beautiful, elegant promises at the very highest level,” but they haven’t taken any concrete action so far.

Turkey and Hungary are the sole NATO members to have not ratified Sweden's and Finland’s bids to join the alliance in the wake of Russia’s invasion of Ukraine. NATO Secretary General Jens Stoltenberg is scheduled to meet with Turkish President Recep Tayyip Erdogan in Istanbul on Nov. 4 in a bid to overcome the impasse ahead of a planned visit by Sweden’s new prime minister, Ulf Kristersson, to Turkey on Nov. 8. The Ukraine conflict and rising tensions between Turkey and Greece will also be on the table.

Kristersson sent a 14-point letter to Erdogan in which he reportedly outlined measures taken to address Turkey’s security concerns. According to Swedish media, Kristersson said that Sweden takes these concerns “very seriously” and wants “to cooperate in the fight against terrorism, including threats from the terrorist organization PKK and all other terrorist organization and their branches.” He was referring to the outlawed Kurdistan Workers Party (PKK), which is very active within the ethnic Kurdish community in Sweden.

Reuters, which first reported on the letter dated Oct. 6, said it contained assurances that Sweden had stepped up measures against Kurdish militants, with Swedish counterterrorism police intensifying “work against the PKK. Sweden said it will address pending extradition requests.

Turkey is demanding the extradition of numerous individuals it accuses of links with the PKK and others associated with Fethullah Gulen, the Pennsylvania-based Sunni imam who is thought to have masterminded the failed coup in 2016. Sweden has so far responded positively to one such case involving a fraudster.

Kristersson and Erdogan spoke over the phone last week, and Erdogan said he would be happy to host him. However, Celik’s remarks suggest that the Swedish government’s steps have not cut any ice.

Sources with close knowledge of the deliberations speaking anonymously to Al-Monitor said Stoltenberg is pressuring Kristerrson’s center-right government that was formed earlier this month much in the same way he did its predecessors to make concessions to Turkey. “He has been pressuring the Swedes like hell to turn away from their alleged ‘rigid’ approach to human rights embodied by [former Foreign Minister] Ann Linde. The idea is that he paves the way for Kristersson’s visit” on Nov. 8 in Ankara, one of the sources said.

“Erdogan’s people will love Stoltenberg and his usual talking points,” the source added, saying the NATO chief was “blind” to Turkey’s appalling human rights record and cozy ties with Russia.

Linde, a Social Democrat, was long one of Ankara’s chief bugbears over her vocal support for the US-backed Syrian Kurdish administration in northeast Syria, which Turkey claims is staffed by “terrorists” because of their links to the PKK.

The prevailing consensus is that Turkey is likely to let Finland’s application proceed but not Sweden’s. Finnish Prime Minister Sanna Marin said last week that Erdogan had told her he had more questions for Sweden than for her country but that there was no question of leaving Sweden behind. Marin and Kristersson pledged to join NATO at the same time at a joint news conference in Helsinki last week.

They may need to wait a while. Some believe Turkey’s hawkishness is linked to domestic politics. Parliamentary and presidential elections are due to be held by June 18, 2023, at the latest. With soaring inflation and rising youth unemployment, the AKP is looking more vulnerable than ever before. Playing tough with Europe may bolster Erdogan’s carefully nurtured image as a strong leader holding firm against a West that is out to hobble Turkey at every turn. “I do not see Erdogan releasing this hostage before the elections,” one of the sources briefing Al-Monitor said.

There is mounting worry among Swedish intellectuals and civil society that Kristersson may prove more pliant. His minority coalition is supported by a far-right party with neo-Nazi leanings. It would have little sympathy for foreign dissidents, even those with Swedish nationality.

“Given that there are a number of asylum seekers who have had their applications denied due to suspected ties to the PKK according to the Swedish security service, and in light of the fact that this government is pursuing generally speaking a much tougher migration policy, I would look to that signaling a shift in general policy — that’s where there could be some movement,” said Paul Levin, director of Stockholm University’s Institute for Turkish Studies. While the government is largely hewing to its predecessor’s line of strictly adhering to Swedish principles on the rule of law, “The prime minister has come in with a greater emphasis on conciliatory rhetoric, a willingness to really listen to Turkish demands,” Levin told Al-Monitor.

Hungary’s Viktor Orban, a close Erdogan ally who also is friendly with Russia, has signaled that he will allow Sweden's and Finland’s memberships to be ratified before the year is out, leaving Turkey on its own.

In an op-ed for Swedish daily Svenksa Dagbladet titled “Don’t just listen to Erdogan, Mr. Kristersson,” Bitte Hammargren, an independent Turkey and Middle East analyst and a senior associate fellow of the Swedish Institute of International Affairs, urged her government not to cave to pressure, saying that Sweden cannot compromise on the rule of law.

“Many of us have been advocating that Sweden remain patient and principled,” Hammargren told Al-Monitor. “After all, if Russian aggression expands in the region, NATO will lend its full support to Sweden and Finland, regardless of whether they are members or not.”