The Swedish prime minister met the Turkish president in Ankara amid the ongoing NATO dispute over Sweden and Finland's accession to the alliance. 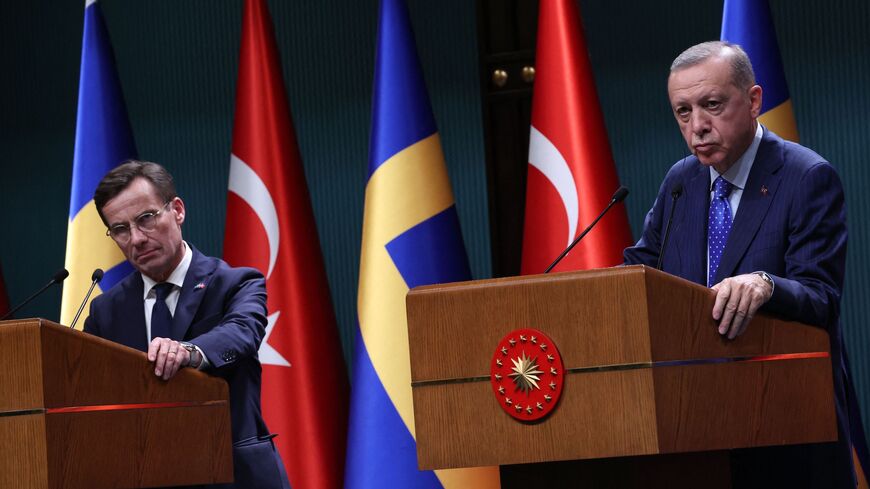 Swedish Prime Minister Ulf Kristersson emerged from talks with Turkish President Recep Tayyip Erdogan without the guarantees he was seeking for Turkey’s approval of Sweden’s NATO membership. In a joint news conference with Kristersson, Erdogan made it clear that unless Sweden fulfilled its commitments to address Turkey’s security concerns under the terms of a trilateral memorandum signed in Madrid, such approval would not be forthcoming.

Sweden and Finland applied for membership in the Western security bloc following Russia’s Feb. 24 invasion of Ukraine. Turkey and Hungary are the sole countries that have not ratified their accession. Turkey has a laundry list of demands, including returning dozens of people it has accused of terrorism and severing ties with a Syrian Kurdish group backed by the United States.

Erdogan aired satisfaction that Sweden had eased restrictions on arms sales that were imposed following Turkey’s 2019 invasion of Syria to fight Kurdish militants. But he complained that terrorist organizations were permitted to hold demonstrations in Sweden and appear on television. “When our citizens see these terrorists walking the boulevards of Sweden and Finland with terrorist rags in their hands, they seek an explanation,” he said.

“Sweden wants NATO membership for its own security,” Erdogan said. But “Turkey wants a Sweden that helps alleviate our security concerns."

Erdogan pointed to several Kurdish groups, notably the outlawed Kurdistan Workers Party (PKK) and its Syrian arm, the People’s Defense Units (YPG), as well as the so-called Fethullah Terrorist Organization (FETO). The latter is accused of masterminding the failed coup to overthrow Erdogan in 2016 under alleged orders from the Pennsylvania-based cleric Fethullah Gulen.

Erdogan said he expected Sweden to extradite an unspecified number of “terrorists.” Four had already been deported. But he singled out a journalist by the name of Bulent Kenes.

Kenes ran a pro-Gulen English-language newspaper before fleeing to Sweden days after the aborted putsch. “Deporting this terrorist to Turkey is very important to us,” Erdogan said.

Gulen-affiliated titles were at the forefront of a government-driven campaign to defang the military. This included publishing documents that later proved to be falsified. When Erdogan and Gulen fell out, the Gulenist media began exposing government corruption based on police investigations, which also incriminated Erdogan and his family.

Kristersson struck an accommodating tone, saying he wanted to “reassure all Turks” that “Sweden will live up to all the obligations made to Turkey in countering the terrorism threat." He said he understood that Ankara is waging a fight against the PKK and wants to help with that fight.

The conservative prime minister pledged last week to distance his government, formed in October, from US-backed YPG forces that are fighting the Islamic State in Syria. Turkey says the YPG threatens Turkey’s national security because of its links to the PKK.

Kristersson’s stance has prompted worry in Sweden that he may compromise the very ideals that Sweden has long prided itself on, including a human rights-based foreign policy.

Kenes, the journalist, rejected Turkey’s claims that he is a terrorist, saying they were all baseless. It was therefore “technically impossible,” he said, for Swedish courts to extradite him.

Kenes told Al-Monitor that he was nonetheless uneasy because his application for permanent residency in Sweden was still being processed. The security agencies of Sweden, Turkey and Finland are holding regular meetings to examine Turkey’s concerns and are due to meet again at the end of the month, as Erdogan recalled during today’s news conference. “They could come up with some formula that may put me at risk,” Kenes told Al-Monitor.

“No attack from Erdogan surprises me; what matters is what Sweden decides,” Kenes added.

Paul Levin, a Swedish academic who runs Stockholm University’s Institute for Turkish Studies, noted that Sweden has already deported or refused residency to around 30 individuals accused of links to the PKK. However, these cases were determined before Sweden even applied for NATO membership. Levin agrees that under Swedish law, individuals granted political asylum cannot be extradited unless proven to have broken Sweden’s own laws. Kenes was already granted asylum status before being processed for permanent residency.

Yavuz Baydar, an award winning veteran Turkish journalist who is also living in exile, believes that Sweden did not consider the consequences of the commitments it made under the trilateral memorandum, which was “a product of haste, if not panic,” and particularly failed to consider those that “jeopardize the independence of the judiciary.”

“It is a case of a clash between democracy and autocracy, in which the latter is determined to maximize gains and dictate both the foreign and domestic policy of its counterpart. Sweden's dilemma is that it feels obliged to respect the memorandum by the letter, while it could easily say ‘I have come this far, but no longer. The rest is up to you,’" Baydar told Al-Monitor.