Turkey calls for more action, not words, from Sweden

Turkey's foreign minister has told his Swedish counterpart that while Ankara welcomes the steps Sweden has taken to get Turkey’s nod for NATO membership, they are not even “halfway” toward fulfilling Stockholm's commitments. 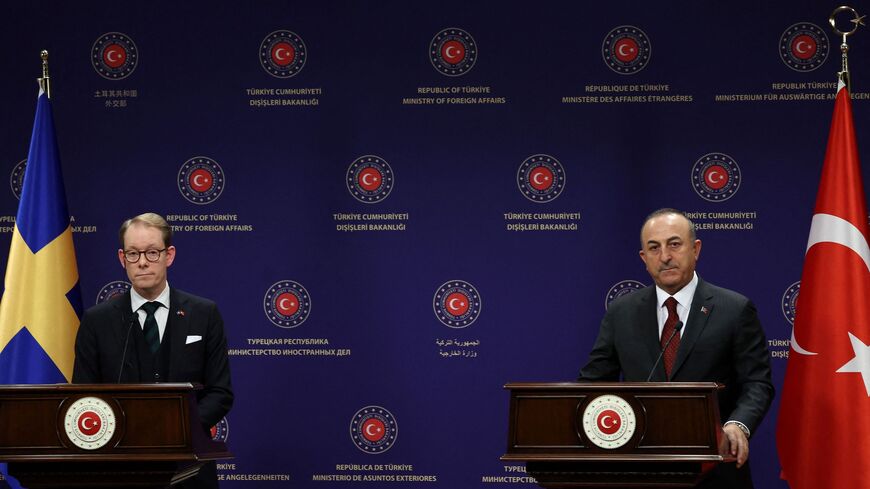 Turkey’s foreign minister urged Sweden Thursday to take concrete steps to tighten its leash on groups linked to terrorism, saying that Stockholm has not even come “halfway” through fulfilling a list of commitments to secure Ankara’s approval to join NATO.

“We take note of the steps taken by Sweden’s new government and we welcome them,” Turkish Foreign Minister Mevlut Cavusoglu said at a presser in Ankara with his Swedish counterpart Tobias Billstrom. But he hastened to add that there was little progress on areas crucial to Ankara, such as asset freezes and extradition of people linked to terror-related charges.

Billstrom's is the last in the chain of diplomatic visits from Sweden and Finland as well as one by NATO Secretary-General Jens Stoltenberg to persuade Ankara to give its nod to NATO’s Nordic expansion. Ending decades — in the case of Sweden, centuries — of neutrality, the two countries made a bid for NATO after Russia invaded Ukraine. The Turkish objections to starting negotiations with the two Nordic countries have been overcome with a trilateral memorandum of understanding signed at the NATO summit in June. With this document, Helsinki and Stockholm promised to address Ankara’s security concerns and lift their de facto arms embargo against Turkey. But Ankara has been dragging its feet on the final ratification of NATO enlargement, saying that the two countries, particularly Sweden, have a long way to go to implement the three-page MoU.

“There is a document; it needs to be implemented. We’re not even at the halfway point yet. We're at the beginning,” Cavusoglu said. He explained that the decision by Sweden’s top court to block the extradition of a Turkish journalist had “seriously poisoned” the talks that had been going constructively.

The ruling conveys the message that Sweden is an attractive country for Kurdish terrorists where they need not fear extradition, he added.

On Monday, Sweden’s Supreme Court blocked the extradition of Bulent Kenes, the former editor-in-chief of Today’s Zaman, who faces charges of supporting FETO, Turkey's name for the so-called Fethullah Gulen movement, which Ankara considers responsible for the unsuccessful 2016 coup. Though Ankara has requested dozens of extraditions from Sweden, Kenes was singled out by President Recep Tayyip Erdogan when he met with Sweden’s newish Prime Minister Ulf Kristersson in Ankara last month. “The extradition of this person is very important for us,” Erdogan had told Kristersson.

Billstrom reiterated that Sweden was fully committed to fulfilling its obligations and that his country already overhauled its anti-terror legislation in 2022. A new and tougher Terrorist Offenses Act entered into force on July 1 with a broadened scope and higher penalties. Additional constitutional amendments will enter into force on Jan. 1, the Swedish minister said.  He added that they will restrict the freedom of association of groups that engage in or support terrorism and penalize membership in terrorist groups and spreading their propaganda.

“We hope to see a clearer change in the Swedish policy on the ground once the new laws are enacted next year,” retorted Cavusoglu.

“We have initiated steps on every paragraph of the memorandum, and we will continue to implement it,” Billstrom pledged.

The three-page memorandum includes establishing a mechanism for cooperating on combatting terrorism and organized crime, facilitating Turkey’s pending deportation requests and supporting Turkey’s involvement in the EU’s Common Security and Defense Policy and participation in the EU’s Permanent Structured Cooperation project on military mobility. Sweden takes over the EU presidency as of Jan. 1.

“I do not think that the Swedish foreign minister came to Turkey with high hopes or expecting a breakthrough,” said Paul Levin, the director of Stockholm University’s Institute for Turkish Studies. “This was more of a meeting to strengthen bilateral ties and do a checkup on the implementation of the memorandum.”

“I think that Cavusoglu clearly outlined the positive steps taken by Stockholm and acknowledged that the new right-wing government was sincere in its desire to live up to their commitments,” Levin told Al-Monitor.  “But though the new laws provide the government with a toolkit, it is not so clear how soon change on the ground would be, regarding stopping demonstrations, extraditions or other areas which Ankara sees as crucial.”

According to pro-government news outlets, Ankara is focused on Jan. 21, when the supporters of the outlawed Kurdistan Workers Party plan to carry out a large-scale demonstration in Stockholm. The Turkish government will also keep an eye on whether Stockholm greenlights the request of some Turkish defense companies who want to procure equipment from Sweden  —  a point raised by Cavusoglu during the press conference.

So what to expect next? On the diplomatic front, a string of visits from Sweden to Turkey is underway to maintain contact. Turkish diplomats say that Swedish Defense Minister Paul Johnson will visit Turkey to meet with his Turkish counterpart Hulusi Akar in January to discuss military cooperation. In addition, Turkish parliament speaker Mustafa Sentop invited his Finnish and Swedish counterparts in January.