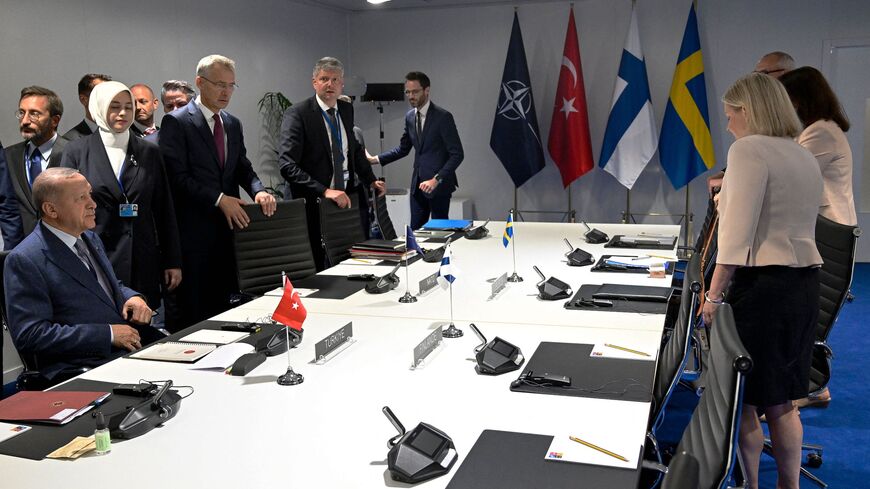 ISTANBUL — The deal allowing Sweden and Finland to progress with their NATO bids was portrayed as an overwhelming victory for Turkish President Recep Tayyip Erdogan on Wednesday, with the Nordic states reported to have agreed to Ankara’s demands.

“Turkey got what it wanted,” Erdogan’s office said in a statement following an agreement at the NATO summit in Madrid.

The sentiment within Turkey’s pro-government media was summed up by a photograph carried by the state-run Anadolu news agency. A grinning Erdogan was shown standing at the NATO podium, flanked by the leaders of Sweden and Finland and NATO Secretary-General Jens Stoltenberg who seemed to be gazing in gratitude at the president.

Tuesday’s breakthrough came after weeks when Ankara appeared ready to scupper the alliance’s northern expansion over calls for Stockholm and Helsinki to tighten their approach to terrorism and drop restrictions on arms sales to Turkey.

Turkey said that Sweden in particular had been harboring militants from the Kurdistan Workers Party (PKK), which has been waging war against Turkey since 1984, leading to tens of thousands of deaths.

It also claims members of what it considers terrorist groups, such as those said to be behind a 2016 coup attempt and the PKK’s Syrian branch, are sheltering in Sweden.

The statement from the Turkish presidency said the agreement would entail “full cooperation with Turkey in the fight against the PKK and its affiliates.”

Elsewhere in the Turkish media, which is largely controlled by Erdogan’s supporters in the business world, the daily Yeni Akit heralded the deal. “Two strongholds of terrorism fall in Europe,” it said.

The Sabah newspaper reported on Erdogan’s “Madrid victory” and praised his “decisiveness and leadership vision” to successfully have Ankara’s demands accepted. Another government-friendly newspaper, Aksam, said the deal incorporated guarantees for Turkey in monitoring the activities of PKK supporters in Sweden and Finland.

The agreement — signed by the foreign ministers of Turkey, Sweden and Finland — also said the Nordic states would “expeditiously and thoroughly” address Turkish extradition requests in accordance with the European Convention on Extradition.

Turkey’s Justice Minister Bekir Bozdag said on Wednesday that Turkey would renew requests to Sweden and Finland for the extradition of 33 individuals it considers terrorists.

FETO, or the Fethullah Terrorist Organization, is the label Ankara applies to the religious sect it holds responsible for the 2016 failed coup. The movement’s leader, US-based Fethullah Gulen, has denied involvement in the bid to overthrow Erdogan.

In parliament, Erdogan’s ultranationalist partner Devlet Bahceli, who last month said NATO expansion would “drag the world into a new fire,” welcomed the Madrid deal as a “national achievement.”

Addressing his Nationalist Action Party (MHP) lawmakers, Bahceli added, “On this occasion, I wholeheartedly congratulate Mr. President, our minister of foreign affairs and all our diplomats, and thank each of them individually.”

Opposition politicians were more critical of the deal, questioning whether promises made by the Nordic countries could be enforced after they enter NATO and Turkey no longer has any leverage.

“This signature that the government gave without any concrete developments from Sweden and Finland is, unfortunately, a compromise that is not in line with the interests of our country,” said Meral Aksener, head of the nationalist Iyi Party.

Addressing his words to Erdogan, Iyi Party lawmaker Muhammet Naci Cinisli added, “Please do not demean the value of Turkey’s word every time. It’s a disgrace, it’s a sin, it’s a pity.”

Engin Altay, deputy chairman of the parliamentary group of the Republican People’s Party, questioned whether any further agreement was made behind the scenes. “What promises were made? What commitments were made? We do not know,” he said.

Many commentators viewed the meeting between Erdogan and US President Joe Biden in Madrid on Wednesday as part of the deal to approve Sweden and Finland’s NATO application, although the White House denied any link.

Erdogan is expected to press Biden to sell Turkey 40 new F-16 fighters and nearly 80 modernization kits for its existing F-16 fleet, a request Ankara initially made in October.

“Erdogan, by this decision, again showed his pragmatism and ability always to do 180s when required,” said Timothy Ash, an economist at BlueBay Asset Management who focuses on Turkey.

“He negotiated hard, right up to the last minute, and got real wins with assurances from the [Swedes and Finns] on the Kurdish issue and from the US on F16s. … He comes back in from the cold with the West.”