Does Erdogan have a green light from Russia to move into Syria?

The US and Iran oppose the planned Turkish operation, as Erdogan digs in further on Finland and Sweden’s NATO bids, and warns Greece on the Aegean Islands. 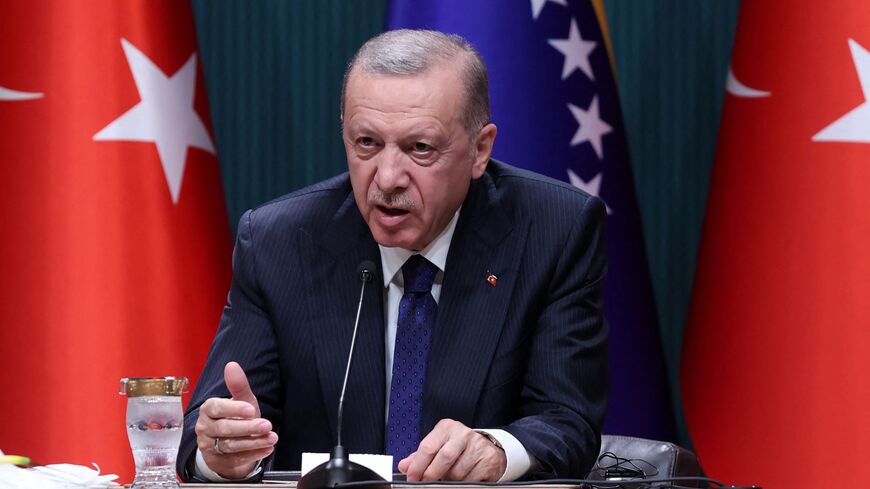 For Erdogan, that good crisis is the Ukraine war, a time for a star turn on the world stage as mediator, as well as for settling accounts with Syrian Kurdish "terrorists" and redefining Turkey's  role within NATO.

In Syria, Erdogan is giving no sign that he is reconsidering his plan for another military operation to carve out a 30-km "security line."

On June 9 he said, "We hope that none of our true allies or friends will object to these legitimate security concerns of our country, or particularly go for terrorist organizations."

Turkey is also in the midst of an economic freefall, as Mustafa Sonmez reports, and burdened by over 3.6 million Syrian refugees, whom Erdogan would like to return to the envisioned "secure" zone.

Khaled Al-Khateb reports from Aleppo that Turkish-backed Free Syrian Army (FSA) factions in northern Syria are preparing for a seemingly imminent Turkish offensive by conducting their own military drills.

Russia, given its international isolation over the Ukraine war, hopes to stay at least somewhat in Turkey’s ally or friend camp, despite many points of friction, including Turkish drone sales to Ukraine.

So perhaps it was no surprise that Russian Foreign Minister Sergey Lavrov said after meeting with his Turkish counterpart Mevlut Cavusoglu in Ankara, "We understand fully the concerns of our friends over the threats created on their borders by outside forces that are fueling separatist sentiment."

The reference to the "outside forces" is a dig at the US military presence in Syria (900 troops) and American support for the SDF — a remark likely appreciated in Ankara.

Lavrov’s "understanding" seemed a shift from just last week when Russia’s Ministry of Foreign Affairs spokeswoman Maria Zakharova said, "We hope that Ankara will refrain from actions that could lead to a dangerous deterioration of the already difficult situation in Syria." Such a move "would be a direct violation of Syria’s sovereignty and territorial integrity,” she said, and would “cause a further escalation of tensions."

… while US is ‘unstinting’ to get Turkey to back off

As for the US, Turkey is "well aware" of the Biden administration’s opposition to a move.

“We are completely unstinting in our efforts with the Turkish government to back them off on this ill-considered venture,” US Assistant Secretary of State Barbara Leaf told the Senate Foreign Relations Committee on June 8.

The State Department has expressed to Turkey its "deep concern" about the impact of a new military incursion on civilians, US counterterrorist operations, and efforts to promote political stability in Syria. The US has called on Turkey to respect ceasefire lines and Ankara’s October 2019 commitment to halt military operations.

The question is whether, in private, these statements of concern are proffered with some type of carrot and stick to give Erdogan pause. The Turkish president doesn’t seem to bend to "concern."

Opposition to another military operation is also coming from the east.

"Turkey and Iran appear headed for a face-off in Syria," writes Fehim Tastekin, "with Tehran explicitly opposing Ankara’s plan for a fresh military operation against Kurdish-held areas, wary of risks to its own posture in the region."

Iran has sent "militia reinforcements to two Shiite settlements northwest of Aleppo, not far from a key area in Ankara’s crosshairs, while trying to talk Turkey out from making the move — apparently with little success thus far," Tastekin adds.

Despite differing and sometimes conflicting interests, Turkey, Russia and Iran have hung together as partners in the ‘Astana’ diplomatic forum for dealing with Syria. But the strains are beginning to show.

"Tehran feels pushed aside as a guarantor of the trilateral Astana process on Syria," writes Tastekin. "The hardening climate might undermine the whole process as the three sides prepare to hold an 18th round of talks later this month."

Meanwhile, Erdogan is not yet showing any hints of compromise in his opposition to the NATO membership bids of Sweden and Finland.

Speaking at a press conference in Ankara on June 8 with Venezuelan President Nicolas Maduro, Erdogan said PKK/YPG/PYD terrorists run "rampant in Sweden … even in their parliaments there are terrorists."

The Swedish parliamentarian he is referring to is Amineh Kakabaveh, a former Kurdish guerrilla whose swing vote has allowed the government to pass the budget and survive a no-confidence vote this past week.

Kakabaveh is an independent who conditioned her support for the government of Prime Minister Magdalena Andersson on Andersson’s Social Democrats recognizing the Kurdish-led autonomous administration in northeast Syria.

The Kurdish connection to Sweden is deep and complex, and difficult to unwind.

"Nesrin Abdullah, commander of the YPG’s all-female arm, is a frequent visitor to Stockholm where she enjoys hero status and is received by top officials," Amberin Zaman reported from Sweden. "They include the foreign minister, Ann Linde, a long-time campaigner for minority rights. Photos showing Abdullah, Linde and Kakabaveh together in the Swedish parliament in May drove Ankara mad, leading Turkish Foreign Minister Mevlut Cavusoglu to blast her at a NATO gathering last month for her 'so-called feminist policies.'"

"Turkey says no such visits can be repeated," Zaman adds. "All support for the YPG, which enjoys the protection of US forces in Syria, needs to end. The activities of PKK-leaning groups inside Sweden must be banned. Ankara also wants Sweden to extradite individuals, mainly Kurds and associates of Fethullah Gulen, the Sunni preacher accused of orchestrating the failed attempt to violently overthrow Erdogan in 2016."

"As long as these terrorists remain in their parliaments and as long as terrorist organizations continue to hold demonstrations with the pictures of terrorist leaders in the streets of Stockholm … we cannot tell them ‘Go ahead, please, join NATO,’" said Erdogan on June 8.

"The same goes for Finland, too. Finland, as well, is engaged in many similar activities unfortunately," he added.

Erdogan: ‘This nation is determined’

He has amped up the rhetoric on Greece, and those NATO countries which provide Athens weapons, in another sign of the deepening schism between the two countries over the Aegean islands.

“Behave yourself," Erdogan warned Athens. "Turkey, if need be, will not hesitate to exercise its rights emanating from international agreements concerning the militarization of islands, let alone giving up on its rights in the Aegean."

"I’m not joking, I’m speaking seriously. This nation is determined," he added.

Given Turkey’s economic crisis, Erdogan may be open to the "highest bidder," says Hadley Gamble of CNBC, on the latest ‘On the Middle East’ podcast.

It may end up being a "question of weapons," adds Gamble, referring to pending US sales of F-16’s to Turkey, which the Biden administration has said is separate from the discussions over Sweden and Finland joining NATO.