From the vantage point of the West, giving in to Ankara’s demands from Finland and Sweden amounts to letting an autocrat design the security architecture of Europe. 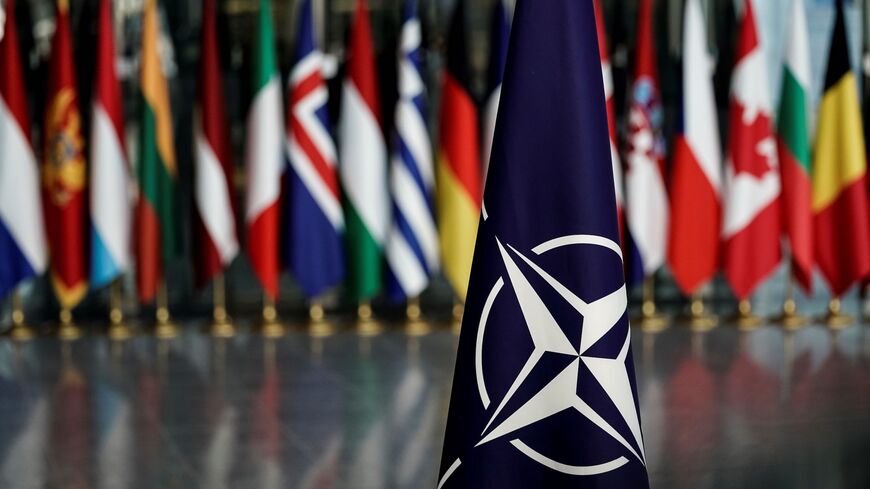 A picture taken on Nov. 20, 2019, shows a NATO flag at the NATO headquarters in Brussels during a NATO foreign ministers summit. - KENZO TRIBOUILLARD/AFP via Getty Images

US President Joe Biden’s announcement of his country’s unequivocal support of Finland and Sweden’s NATO membership bids came as a veiled rebuke of Ankara.

Flanked by Finland’s President Sauli Niinisto and Sweden’s Prime Minister Magdalena Andersson, Biden declared both nations have the "full, total, complete backing" of his country after a trilateral meeting at the White House on May 19.

Biden said both countries were “highly capable partners to join the strongest, most powerful defensive alliance in the history of the world,” adding, "The bottom line is simple, quite straightforward: Finland and Sweden make NATO stronger. Not just because of their capacity but because of their strong, strong democracies.”

Ankara is the only capital among the 29 NATO members to block Finland and Sweden’s admittance to the transatlantic alliance. Turkey's President Recep Tayyip Erdogan has persistently lashed out at both countries for being “guesthouses” for groups that Ankara considers terrorist organizations.

Only hours before the summit at the White House, Erdogan reiterated his objections. “We told them that we could not accept them in NATO because NATO is a security organization where terrorist networks cannot have any place,” he told a group of young people in video released on May 19.

Making matters worse for Erdogan was Biden’s response to a May 18 question on how Washington was planning to convince Turkey. “I’m not going to Turkey, but I think we’re going to be okay,” he told journalists.

Erdogan remains defiant, reiterating the same sentiment on every occasion. Most recently, he said Sweden and Finland “had to pick their sides” between “terrorist organizations” and Ankara’s concerns, speaking after a cabinet meeting on May 23.

The apparent recipients of Erdogan’s messages are not not confined to Sweden and Finland. He has also dialed up his discourse against the United States and European Union for their support to the Syrian Kurdish group the People’s Protection Units (YPG), the backbone of the Syrian Democratic Forces, the major ally of the US-led coalition against the Islamic State.

Sweden and Finland’s bid to join NATO came in response to Russia’s invasion of Ukraine. The historically neutral nations’ applications to join the Euro-Atlantic security system marks the most dramatic evolution in European geopolitics in the post-Cold War period.

Turkey’s resistance to such a historic move has given it an image as Russia’s Trojan Horse in NATO and as a villain in the eyes of much of the Western world.

Erdogan’s position may spark a debate over Turkey’s own NATO membership.

“For reasons that are political, parochial and irrelevant in the decision, President Recep Tayyip Erdogan has taken a hard line in his efforts to derail the prospective members. This should raise the question of whether Turkey under Mr. Erdogan’s leadership belongs in the alliance,” read a May 18 op-ed in the Wall Street Journal.

The article concluded with a novel suggestion. “Turkey is a member of NATO, but under Mr. Erdogan it no longer subscribes to the values that underpin this great alliance. Article 13 of NATO charter provides a mechanism for members to withdraw. Perhaps it is time to amend Article 13 to establish a procedure for the expulsion of a member nation.”

Finland and Sweden are highly respected countries with excellent records of democracy and human rights in the West. Finland ranks first in the 2021 Corruption Perceptions Index and Sweden ranks fourth. Sweden is the fourth and Finland is the sixth country in the 2021 Global Democracy Index, which ranks Turkey 103rd.

Erdogan’s depiction of both countries as a “guesthouses” of terrorism and terrorists hardly align with these rankings.

Thus, Ankara’s preventing both nations from taking their place in the new, post-post-Cold War security architecture cannot be considered a mere procedural matter over political disagreements.

From the vantage point of the West, giving in to Ankara’s demands amounts to letting an autocrat design the security architecture of Europe and shape the future of the Western system. The code of conduct of Turkey's current authorities runs against the traditional problem-resolving mechanisms between friends and allies.

The drama that unfolded at a May 16 NATO meeting in Berlin last week is a case in point. Citing a source with close knowledge of the discussions, Al-Monitor's Amberin Zaman reported Turkey’s Foreign Minister Mevlut Cavusoglu lashed out his Swedish counterpart Anna Linde and what he called her “so-called feminist policy.” Three NATO diplomats speaking to Reuters described the moment as an “embarrassing” break in protocol. “For us, it was a historic moment and yet Cavusoglu said he was irritated at Linde's 'feminist policy,' bringing so much drama,” another NATO diplomat told Reuters.

The Turkish officials' discourse over the matter frames the conflict as a zero-sum game. Even if Turkey’s Western counterparts were willing to appease and satisfy Erdogan’s demands, Ankara’s ultimatum-like approach would remain problematic because of its inconsistency.

Turkey demands that Sweden and Finland lift the arms embargoes against Ankara over its military operations against the Kurdish-led SDF in northeastern Syria in October 2019. Turkey equates the YPG to the outlawed Kurdistan Workers Party (PKK), an armed outfit that has been waging an armed conflict against Ankara for some four decades, and asks Sweden and Finland to adopt a similar position. Sweden, along with several Western countries, has considered the PKK a terrorist organization since 1984. Ankara also wants extradition of the Turkish and Kurdish dissidents living in the two Nordic countries. Both countries’ noncompliance with this demand was brought up by Erdogan himself and covered widely by media outlets strictly under his control.

The Turkish media reported that Stockholm and Helsinki refused Ankara’s demand for the extradition of 33 people from Sweden and Finland. Erdogan’s mouthpieces A Haber TV and the Daily Sabah disclosed eight names that Ankara wanted from Sweden. It quickly came out that the eight include a physician at the University Hospital in Uppsala who passed away seven years ago and has never been in the ranks of the PKK. The blunder was reported by the influential Swedish daily Expressen. One other name cited in the reports turned out to have never been in Sweden. Two more, prominent publisher Ragip Zarakolu and journalist Bulent Kenes, are either Swedish citizens or residents who have never been associated with terrorist acts.

Turkey’s presidency announced that delegations from Finland and Sweden are traveling to Turkey on May 24 for talks over Ankara’s “concerns.” However, a change of position by the Swedish and Finnish authorities on Ankara’s extradition demands seems like a tall prospect. Biden’s firm stand with both capitals also encourages this assumption.

Erdogan chose to play hardball with the West, but now it's Washington’s turn.