How Turkey's opposition to Sweden, Finland joining NATO could backfire

It seems Turkey will continue to block Finland and Sweden’s memberships at the upcoming NATO summit, but Ankara is now signaling its lack of interest in strengthening the alliance. 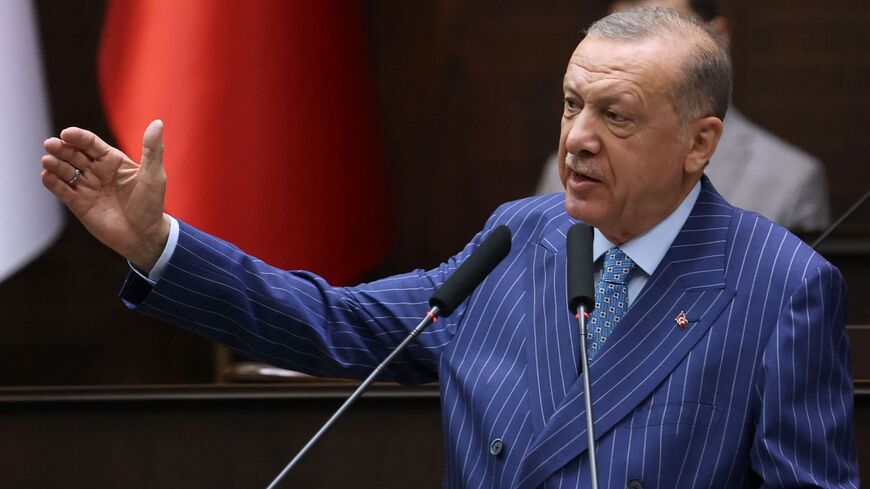 Turkish President and leader of the Justice and Development Party Recep Tayyip Erdogan delivers a speech during his party's parliamentary group meeting at the Turkish Grand National Assembly in Ankara on June 15, 2022. - ADEM ALTAN/AFP via Getty Images

Ankara’s brinkmanship over Finland and Sweden’s NATO bids will likely come at a price.

The upcoming NATO summit in late June was expected to be a celebration of regained Western solidarity by starting off Finland and Sweden’s accession process to NATO — a dramatic break away from both Nordic countries’ decades-long non-aligned policies.

Yet less than a week before the summit, such hopes have been mostly dashed, as Ankara will likely maintain its stand against the Nordic nations’ accessions and continue to be the only country which threatens to veto the Swedish and Finnish bids unless its preconditions are met. The tripartite talks between Turkish, Finnish and Swedish officials in Brussels June 19-20 under the auspices of NATO also “ended inconclusively,” further diminishing the prospect of a potential breakthrough at the upcoming summit.

Turkish President Recep Tayyip Erdogan's brinkmanship evokes memories of Turkey-EU talks back in 2004. Trying to secure a date to begin membership negotiations for Turkey’s decades-old EU membership bid, then-Prime Minister Erdogan played a similar hand by walking away from the talks. He and his entourage returned only after intense diplomacy by UK, German, French and Italian leaders. Erdogan’s first brinkmanship at the time had paid off, and Turkey secured a date for the start of negotiations.

Erdogan is expected to adopt a similar approach in Madrid, where he will likely be seeking a meeting with President Joe Biden, who has given him the cold shoulder until now. Amid rumors of possible early elections, Erdogan needs an image of a strong and successful international statesman for his domestic audience.

The Turks are not in a hurry. The NATO summit “was not a deadline for Finland and Sweden’s membership in the alliance” said Turkish spokesperson Ibrahim Kalin, who led the Turkish side during the tripartite negotiations this week. A source also told Al-Monitor’s Amberin Zaman, “The Turks are not providing any clear perspective for their membership, and it is likely to turn into fireworks in Madrid.”

The Turkish side has been referring to Greece’s years-long veto of North Macedonia’s membership over a name dispute, which took some 10 years to overcome. On paper, the argument sounds reasonable, but the backdrop is radically different.

Finland and Sweden’s applications come as setting up a new European security architecture and strengthening NATO have become more pressing amid the ongoing Russian assaults against Ukraine.

However, Erdogan’s Turkey is in no hurry to see a strengthened NATO. Erdogan’s Turkey could be closer to Putin’s Russia in spirit than it is to the democratic nations of the Western world. The affinity between authoritarian leaders and autocracies should not be underestimated. The strengthened and reinvigorated NATO does not seem to be a priority for Erdogan.

Erdogan's preconditions to withdraw Turkey’s veto are not only unrealistic but impossible for the two Nordic countries to implement. They range from the extradition of certain Swedish citizens or residents of Kurdish and Turkish origins to banning their activities in Sweden and terminating Sweden’s relations with the Syrian Kurdish groups. Turkey considers a major force within the Syrian Democratic Forces — a top ally in US-led fight against the Islamic State — to be a terrorist organization. SDF remains under the American security umbrella in northern Syria, where they can survive thanks to the American military presence in the region.

“Mainstream Turkish politicians, as well as many humbler Turks, see the PKK purely as a security threat and criticize the West for not taking their concerns about the group seriously," the Economist summarized in a June 16 article, using the acronyms for the outlawed Kurdistan Workers’ Party, which has been fighting the Turkish government for almost 40 years. "Turkey equates PKK and the Syrian Kurdish groups. … Westerners meanwhile, tend to believe that Turkey bears much of the blame for the PKK’s emergence by refusing to grant the country’s Kurds the rights they demand.”

Ankara’s position has also unleashed a debate over Turkey’s NATO membership. “Turkey is a member of NATO, but under Mr. Erdogan, it no longer subscribes to the values that underpin this great alliance,” a Wall Street Journal op-ed said on May 18. "Article 13 of the NATO charter provides a mechanism for member states to withdraw. Perhaps it is time to amend Article 13 to establish a procedure for the expulsion of a member nation that meets neither the principled nor the practical requirements for membership."

Almost a month after the WSJ article, The Economist echoed a similar sentiment, underscoring the mounting frustration among Western capitals. “Erdogan’s move to block Sweden’s and Finland’s accession to NATO further damaged Turkey’s standing in the alliance,” the article said.

“Obstructing Finland’s and Sweden’s membership while war rages in Europe is bound to have consequences, even if Erdogan backs down. … Western countries will try to work round Turkey’s veto by providing Finland and Sweden with security guarantees. This may leave Turkey sidelined within the alliance,” it added. Currently, the text of the North Atlantic Treaty doesn't allow member states to expel or suspend another member state under any circumstances.

The 2004 EU summit where Turkey secured a date to start negotiations with the European bloc is a distant memory. Erdogan’s brinkmanship may not work in Madrid.

Even if the Madrid summit ends without a compromise, Sweden and Finland will likely become NATO members one way or another. If NATO leaders fail to find a face-saving formula at the summit, Erdogan's veto may backfire. Furthermore, it looks like Madrid would not be a cost-free enterprise for Turkey regardless of the outcome. It will be difficult for NATO to forget the bitter taste that Erdogan left in the alliance's ranks.