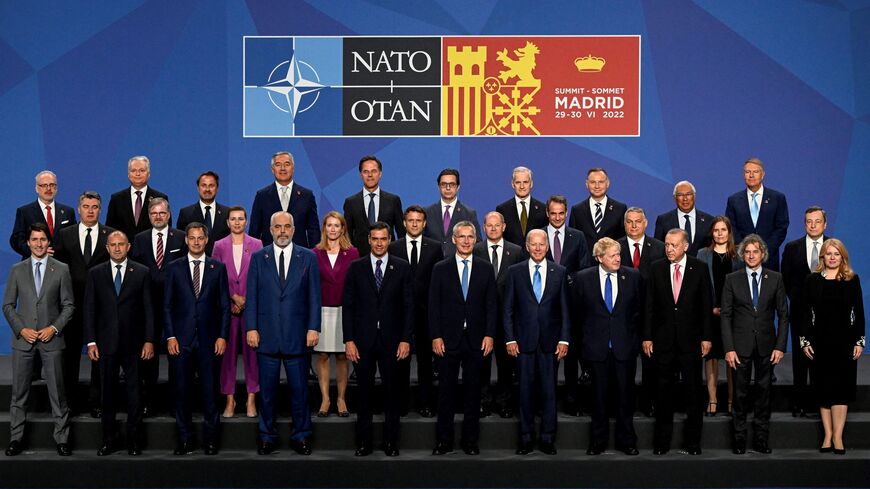 Heads of state and government pose for the official group photo during the NATO summit in Madrid on June 29, 2022. - PIERRE-PHILIPPE MARCOU/AFP via Getty Images

Leading the news: Turkey allows ‘invitation’ to Sweden and Finland for NATO

Turkish President Recep Tayyip Erdogan has agreed not to veto NATO’s invitation to Sweden and Finland to join the alliance, breaking a months-long impasse. The intervention of US President Joe Biden, who spoke with Erdogan by phone on Tuesday morning, helped smooth the agreement, as Nazlan Ertan reports. NATO leaders have been pressing Erdogan to allow the bids by the two countries, who applied for membership in response to Russia’s invasion of Ukraine.

But the "trilateral agreement" reached by Turkey, Finland and Sweden at the NATO summit in Madrid this week does not make membership a done deal.

The Trilateral Memorandum: Signed by the foreign ministers of Turkey, Sweden and Finland on June 28, the agreement is less an endorsement of membership than a checklist of Turkish expectations.

First, the memorandum concludes with Turkey agreeing to the "invitation" of the two countries to join NATO. That’s it.

Second, it established a "joint mechanism" for implementation of agreed-upon "concrete steps," or Turkish conditions, for Swedish and Finnish membership. They will require the two Nordic countries to:

"Turkey got what it wanted,” Erdogan’s office said in a statement following the announcement, as Andrew Wilks reports.

Turkey could slow fast-track accession: Following NATO’s invitation to Sweden and Finland, the next step is for each of the 30 NATO member states to ratify the protocols one by one, according to their own systems — usually via approval in their parliaments (or Congress in the US). Once approved, NATO chief Jens Stoltenberg formally will invite Sweden and Finland to accede, which they do according to their own internal processes, and then US Department of State is notified to complete the process.

NATO will want to fast-track the process, but Turkey’s approval will ultimately depend upon its assessment of the "concrete steps" taken by Sweden and Finland.

Biden: ‘You’re doing a great job’: Erdogan also got his long-awaited meeting with US President Joe Biden at the NATO Summit. From Erdogan’s perspective, it was worth it, following a scratchy period in US-Turkey relations. "I want to particularly thank you for what you did putting together the situation with regard to Finland and Sweden, and all the incredible work you’re doing to try to get the grain out of Ukraine and Russia," Biden said. "I mean, you’re doing a great job."

President Joe Biden is about to walk into a political minefield in Israel. When he arrives in the Jewish state next month, he’ll be greeted by newly minted caretaker Prime Minister Yair Lapid, who is set to take over from Naftali Bennett next week ahead of elections this fall that could return former premier Benjamin Netanyahu to power. For Biden, one big question is whether Lapid will maintain Bennett’s hawkish, confrontational policy on Iran.

Ben Caspit writes that it should be easier for Biden to do business with Lapid, a centrist who tends to be more of a pleaser than his predecessor. But as a senior Israeli diplomatic source told Caspit, it remains to be seen whether “Biden can reassure Lapid on the Iran agreement and offer sufficient US guarantees convincing Lapid to take his foot off the gas pedal.” Biden will visit Israel weeks after indirect talks aimed at reviving the nuclear deal resumed in Qatar.

Saudi Arabia has made clear whose side it takes in the Grand Ethiopian Renaissance Dam (GERD) dispute. Following a meeting between Egyptian President Abdel Fattah al-Sisi and Saudi Crown Prince Mohammed bin Salman in Cairo last week, the two countries issued a joint statement affirming Saudi Arabia’s “full support for Egypt’s water security being integral to the Arab water security.” Ethiopia is preparing for the third stage filling of the massive hydropower dam’s reservoir on the Blue Nile, which Egypt and Sudan say threatens their freshwater supplies.

The Saudi stance on the GERD is noteworthy given the kingdom’s high volume of trade with Ethiopia. Saudi Arabia is also the third-largest investor in the east African country. Ahmed Aboul Gheit, chief of the Cairo-based Arab League, recently suggested Arab investments in Ethiopia be used as a “pressure card” to bring Addis Ababa back to the negotiating table.

Saudi Arabia's leading fried chicken brand has set its sights on Egypt. Fast food chain Albaik is in talks to expand into North Africa, “capitalizing on a thriving fast food business in the populous Arab country and opening the door for speculation about whether it plans to overtake the fast food and fried chicken market in the country,” writes Amr Emam. Its entry into the Egyptian market is part of the $7.7 billion investment package announced during Saudi Crown Prince Mohammed bin Salman’s recent visit to Cairo. But Albaik will have some competition in Egypt, where popular American chain Kentucky Fried Chicken dominates.

Hamas’ military wing seized an Israeli military surveillance balloon after it crashed in the northern Gaza Strip earlier this month. Hours later, Israeli warplanes responded by bombing one of Hamas’ military positions. An official within the Gazan militant group told Al-Monitor that Israeli forces tried to recover the balloon, but were unable to do so. The official told Ahmad Abu Amer that Hamas hopes to use the balloon to monitor the Israeli military’s movements. The Gaza-based group currently uses simple, locally made drones to monitor its neighbor.

ICYMI: Former US Ambassador to Israel Daniel Shapiro and Andrew Parasiliti discuss what to expect from President Joe Biden’s trip next month, as well as scenarios for Israel’s fall elections.