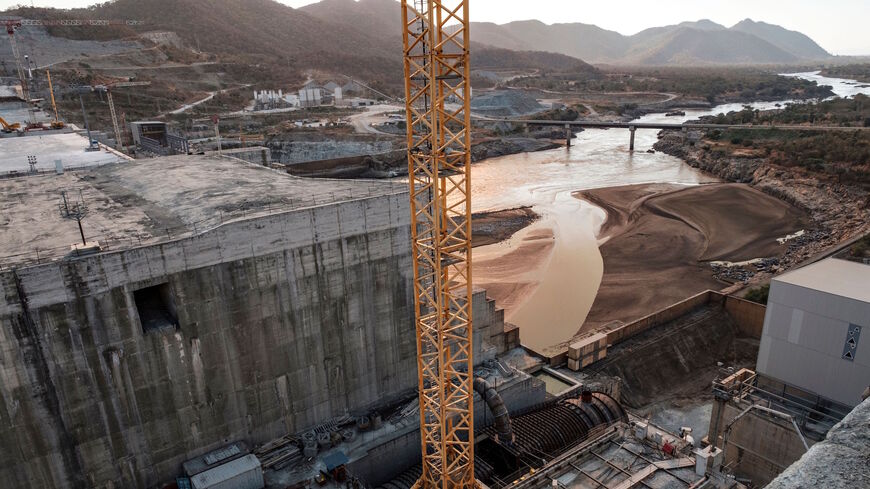 This file photo taken on Dec. 26, 2019 shows a general view of the Blue Nile river as it passes through the Grand Ethiopian Renaissance Dam (GERD), near Guba in Ethiopia. - EDUARDO SOTERAS/AFP via Getty Images

Shuttle diplomacy picks up: US Horn of Africa envoy Jeffrey Feltman was in Saudi Arabia, Qatar and the United Arab Emirates last week to de-escalate a potential conflict between Egypt, Sudan and Ethiopia over the Grand Ethiopian Renaissance Dam (GERD). Samuel Ramani has the background here on why the UAE — which has strong ties with all three countries — is emerging as a key diplomatic broker and partner in this effort.

Why it matters: For Ethiopia, the GERD offers hope of a boost for its economic and energy development, potentially positioning it as an electricity exporter in the region. For Egypt, the Nile is vital in another way, providing over 95% of its water needs; Sudan, too, depends on Nile water. Both countries are concerned about water supply disruptions from the dam and have called for an internationally brokered arrangement for the management of its water flow. Mohamed Saied reports here on the high anxiety in Egypt over recent developments, and Abdulla Kadry reports on a new "popular front" to protect Egypt’s access to Nile River water.

Benchmarks: Ethiopia holds elections June 21, which will be a referendum on Prime Minister Abiy Ahmed’s policies. The elections had been delayed from August 2020 because of the COVID-19 pandemic. The GERD is a hot nationalist issue; Abiy can’t be seen as buckling to pressure. Ethiopia is threatening to go ahead with the second filling of the GERD in July, a phased process taking at least five years to fill the dam and make it operational. The decision has sparked concern in Egypt and Sudan that the Nile’s water flow would be disrupted again this summer.

Realignment: The GERD dispute is linked to a realignment in the Horn of Africa. Abiy, who received a Nobel Peace Prize in 2019 for making peace with Eritrean President Isaias Afwerki, is aligned with Eritrea in suppressing unrest in the Tigray region, which is becoming a regional conflict. Military operations by Ethiopian, Eritrean and proxy forces have been condemned for human rights abuses by the United States and the international community. The conflict has at times spilled over into Sudan. In addition to this newfound partnership with Eritrea, Ahmed Gomaa reports that Ethiopia plans to build military bases in the Red Sea. Muhammed Magdy writes here about how the Nile dispute correlates with Egypt expanding its own regional security network; Cairo recently concluded a military agreement with Kenya, in addition to expanded security ties with Sudan, Uganda and Burundi.

Final word: The risk of military conflict over the dam may be low, but the Nile dispute is high stakes for all three parties. A diplomatic, face-saving offramp may be in the making, perhaps after the Ethiopian elections. There is also a chance the dispute could end up at the Security Council, but the parties and mediators may prefer a regionally driven mediation, with US engagement  Meanwhile, the crisis has spurred Egypt to consider new approaches to water management, including via contacts with China, as George Mikhail reports.

As NATO heads of state flock to Brussels for the alliance’s annual summit next week, all eyes will be on President Joe Biden and his Turkish counterpart Recep Tayyip Erdogan.

Topping the agenda for their long-anticipated June 14 meeting is the persistent friction over Turkey’s purchase of Russian-made S-400s and the country’s subsequent expulsion from the American F-35 joint strike fighter program. The two leaders also are expected to discuss the Biden administration’s support for Kurdish forces in Syria and Washington’s refusal to extradite Pennsylvania-based cleric Fethullah Gulen.

The Turkish leader has a tricky balancing act ahead of him. As Metin Gurcan writes, “Erdogan remains squeezed between an imposing need for a thaw in his fraught ties with Washington and the task of selling it to his fold at home, where anti-American sentiment is running high, not least because he has often fueled it himself.”

Military sources confirmed to Metin Gurcan that the Turkish-built Kargu-2 drones were operating in Libya, where Ankara provided military support to the Tripoli-based Government of National Accord (since supplanted by the Government of National Unity). The sources, however, denied the drones relied on AI to select and hit targets and instead they claimed that on-the-ground operators — humans, in other words — made the decisions to strike.

The UN report “was met with nationalist euphoria in Turkey’s pro-government media, which lauded Kargu-2 as further proof of how far the domestic defense industry has progressed under President Recep Tayyip Erdogan.” Outside of Turkey, the debate continues over whether such lethal autonomous weapons should be banned from war.

Lapid, not Bennett, holds the strings

Right-wing Yamina leader Naftali Bennett is gearing up to serve as Israel’s next prime minister, but it’s Yesh Atid leader Yair Lapid, not Bennett, who will be the ultimate arbiter in Israel’s new government.

“He has concentrated enormous power in his own hands,” Mazal Mualem writes of Lapid. Under the proposed rotation deal, Lapid will first serve as alternate prime minister and foreign minister. But like Bennett, he too will have veto power over government decisions and together they will call the shots. The arrangement is pretty remarkable, given that Bennett campaigned on how dangerous Lapid is.

The Knesset on Sunday will decide the fate of the new government, with the coalition against Prime Minister Benjamin Netanyahu, at least as of publication time, expected to prevail with a razor-thin majority.

The inclusion of the Mansour Abbas-led Ra'am, an independent Arab party, in Israel’s emerging new government is historic. But are Arab Israeli voters impressed?

As Afif Abu Much explains, some fear a dangerous precedent has been set by Abbas’ singular focus on narrow if vital issues for Israel’s Arab community, such as pushing for the recognition of Bedouin villages in the Negev region.

It remains to be seen how much influence Abbas can wield in the eight-faction governing coalition, but for some supporters, the Ra'am party leader has at least succeeded in ending Netanyahu’s “Wild West treatment of Arab citizens of Israel.”

Meanwhile, Israeli Jews and Arabs are not giving up on coexistence after the violence in mixed cities last month, as Abu Much reports here.

Gaza’s reconstruction off to a slow start

The Gaza Strip has a long road ahead to recovery, after more than a week of fighting between Israel and Hamas reduced parts of the already impoverished Palestinian enclave to rubble.

Rasha Abou Jalal has this analysis on how competition between the Palestinian Authority and Hamas over reconstruction funds could slow the rebuilding process.

At the same time, unnamed Hamas sources in Lebanese media are threatening that the militant group will resume fighting if Israel prevents Qatari aid from reaching Gaza, writes Hana Salah.

As residents of the coastal enclave continue picking up the pieces from last month's 11-day conflict, Taghreed Ali tells how many Gazan women are making ends meet by selling handcrafted goods on social media. And Mai Abu Hasaneen reports from Gaza's beaches, where thousands of residents flocked after the recent fighting ended despite high water pollution levels and fears of COVID-19 spread.

What we’re reading: 'Midnight in Cairo'

Raphael Cormack chronicles the stories of enterprising women, including vaudeville star Rose al-Youssef and nightclub singer Mounira al-Mahdiyya, who revolutionized Egypt’s entertainment industry in the early 20th century in his new book “Midnight in Cairo,” which tells the stories of Egyptian women who were “demanding to be heard as they asserted their wishes, claimed their rights, and made space for themselves.” Check back next week for Andrew’s podcast with Cormack.

Long-lost artifacts dating back to the era of Egypt’s King Ramses III could be buried in Saudi Arabia, Hagar Hosny writes. Archaeologists have already uncovered in northern Saudi Arabia some evidence of Egyptian trade, including Ramses’ hieroglyphic inscriptions. With an excavation planned for November, the archaeologists are hoping to shed light on the pharaohs who sent trade missions to the Arabian Peninsula more than 3,000 years ago.

If all goes as planned, an unlikely coalition of Israeli parties will bring an end to Netanyahu’s 12-year rule on Sunday. In case you missed them, and even if you didn’t, check out  Ben Caspit’s podcasts from last year with the prime minister in waiting, Naftali Bennett, and the man who orchestrated Netanyahu’s political downfall, opposition leader Yair Lapid.