US fears state collapse, regional spillover in Horn of Africa. 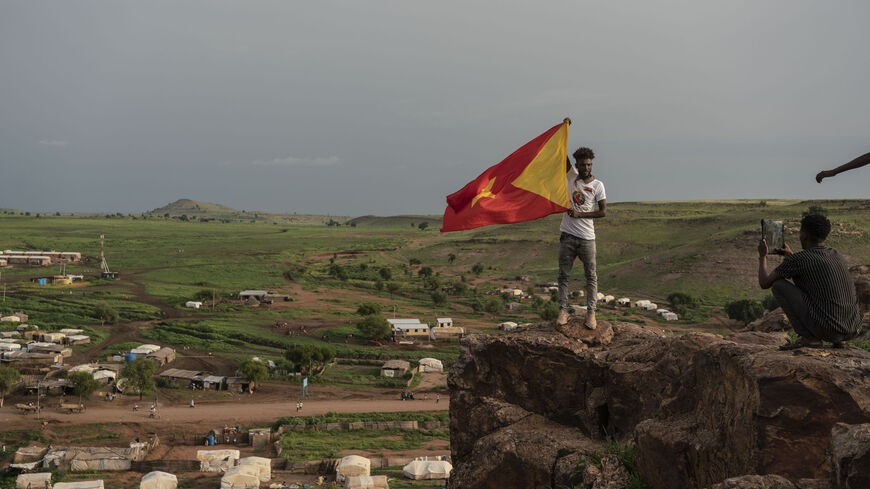 A youth holds the Tigrayan flag in the Sudanese village of Um Rakuba, home to over 20,000 refugees, on Aug. 18, 2021. The latest influx of refugees saw more than 50,000 people flee into Sudan after military confrontations broke out between Ethiopia and the Tigray Peoples' Liberation Front in late 2020. - Abdulmonam Eassa/Getty Images

US Horn of Africa Envoy Jeffrey Feltman is in Ethiopia again this week out of concern for a significant deterioration in the security situation there, while encouraging US citizens in the country to consider making plans to leave.

Feltman will also try to prevent the Ethiopia crisis from escalating into a regional conflagration involving Sudan, Egypt and perhaps other countries.

As we explain here, Sudan has been a good news turnaround story over the past two years, propelled by pro-democracy demonstrations that ousted dictator and war criminal Omar al-Bashir in April 2019. Sudan’s fragile economy depended on US and international assistance, which have been frozen since Lt. Gen. Abdel Fattah al-Burhan, the head of Sudan’s armed forces, ousted Prime Minister Abdalla Hamdok and other civilian officials from the transitional Sovereignty Council on Oct. 25.

In Ethiopia, the civil war in Tigray, which began one year ago this month, has gone from bad to worse. Armed groups aligned with the Tigray People’s Liberation Front now threaten the capital, Addis Ababa. Prime Minister Abiy Ahmed has declared a state of emergency and called on citizens to arm themselves. Feltman said this week that all sides, including Ethiopian and Eritrean military forces, as well as Tigray-linked militias, have committed “rampant atrocities”. Feltman warned of “the deterioration of the integrity of the state” in Ethiopia.

The gloss is off Abiy, who two years ago won the Nobel Peace Prize for making peace with neighbor and long-time antagonist President Isaias Afwerki of Eritrea. Now Abiy and Isaias are partners in alleged crimes in the conduct of their military campaign in Tigray, according to US and human rights reporting.

The Sudan and Ethiopia crises are linked. A long-standing border dispute resumed last year over the disputed 260-square-kilometer Al-Fushqa region when Sudan expelled Ethiopians living there. Thousands of refugees from the fighting in Tigray now are encamped in Sudan.

Authorities in Khartoum have accused Ethiopia of exploiting the coup to advance its claims on the border; Addis Ababa has made similar claims against Sudan since fighting broke out in Tigray. Mohamed Saied has the background here.

Feltman has some momentum in Sudan, in part because US regional partners are also fully engaged in the effort. The US, Saudi Arabia, the UAE and the United Kingdom released a statement on Nov. 3 calling for “the full and immediate restoration of its civilian-led transitional government and institutions.”

The UAE, for example, may be the only country with close ties to not only Sudan, Ethiopia and Egypt, but Eritrea as well. Abu Dhabi’s more assertive, if unusually discreet, diplomatic posture in the region couldn’t be better timed. In the past few years, the UAE has recast, and reprioritized, its Red Sea strategy “toward a synthesis of economic investment and remote power projection,” as Samuel Ramani explained here in March.

And then there is Egypt, the most impactful player in the horn and a “vital partner“ of the United States. Foreign Minister Sameh Shoukry will be in Washington Nov. 8-9 for the annual US-Egypt Strategic Dialogue. Cairo has been pressing for an internationally brokered agreement to manage the Grand Ethiopian Renaissance Dam (GERD). Egypt depends on the Nile for over 90% of its water and worries that the GERD could reduce the flow, which would be devastating for Egypt’s economy and climate. Sudan has backed Egypt in the Nile dispute. Abiy, however, has made the GERD a nationalist cause, and has said he will only engage via African Union mediation. Those talks are at a dead end.

Egypt wants the United States, United Nations and the European Union to play a larger role in mediation and has taken its case to the Security Council. Events in Sudan and Ethiopia have, at least for now, stymied the prospects for diplomacy, as Ayah Aman reports. With Abiy engulfed by the civil conflict in his country, he may be too distracted to proceed with the next steps in GERD construction and the “third filling” of the dam, which had been announced.

The links between the political crises in Sudan and Ethiopia lend an urgency to Feltman’s diplomacy. US leverage is substantial: it has already frozen assistance to Sudan and sanctioned Ethiopia. But US-Ethiopian ties, once strong, are cracking, according to Feltman. And the United States only recently reestablished good ties with Sudan, so its leverage may be limited. Egypt and the UAE, who have cultivated steady ties with Burhan and the military, especially since 2019, are much better placed to work with Sudan.

At issue for outside players: the Brothers

Both Egypt and the UAE want to eliminate the influence of the Muslim Brotherhood, an Islamist group they believe supports terrorism. There are reportedly still pro-Bashir, pro-Brotherhood advocates in Sudan’s military and government. Burhan, who served under Bashir, is considered solidly anti-Brotherhood, and has the confidence of Cairo and Abu Dhabi. The official Sudanese line was that Brotherhood elements may have been behind the earlier failed coup in September, as Baher al-Kady reports.

Ayah Aman reported here on increased Egyptian and Sudanese cooperation to counter perceived cells of the Brotherhood and Islamic State.

Egypt has also been troubled by the expansion of Turkey’s ties with Ethiopia, including the sale of drones which could be used by Ethiopian forces in Tigray, as Fehim Tastekin reports.

Cairo and Ankara this year began a tentative rapprochement following years of acrimony after the military overthrow of former Egyptian Muslim Brotherhood President Mohamed Morsi in 2013. Turkey’s ruling Justice and Development Party (AKP) is a kindred spirit to the Brotherhood, and had good ties with both Morsi and Bashir.

Meanwhile, the Biden administration wants to be sure Russian President Vladimir Putin doesn’t exploit the situation in Sudan.

A military-led government is likely to be more interested in deeper ties with Russia, writes Kirill Semenov. The Hamdok-led council, “in Moscow’s view, had acted with an eye on Washington and Western countries that did not support the military. In particular, the military regime may speed up the process of creating a Russian naval base in Sudan that has been in the works for years.”

The Sudanese people will have their say

While the Ethiopian crisis appears in a downward spiral, the United States and regional powers still have some leverage in Sudan.

The question is whether the Sovereignty Council can be reassembled, either with Hamdok, as the United States demands, or another civilian prime minister who can pass muster with the US, international donors, and, perhaps most importantly, Sudanese protesters. Feltman has indicated Washington would accept a role for the Sudanese military in the transition but is adamant that the civilians be back in charge. The Sudan Constitutional Declaration (August 2019) and the Juba Peace Agreement (October 2020), while they don’t name names, make clear that the civilians are up next in leading the transition. All parties need to keep in mind that the Sudanese people are long overdue for responsive and democratic government.