Biden’s nominee to be secretary of state promises "fully engaged” US policy in Horn of Africa, as the crisis between Ethiopia and Sudan escalates. 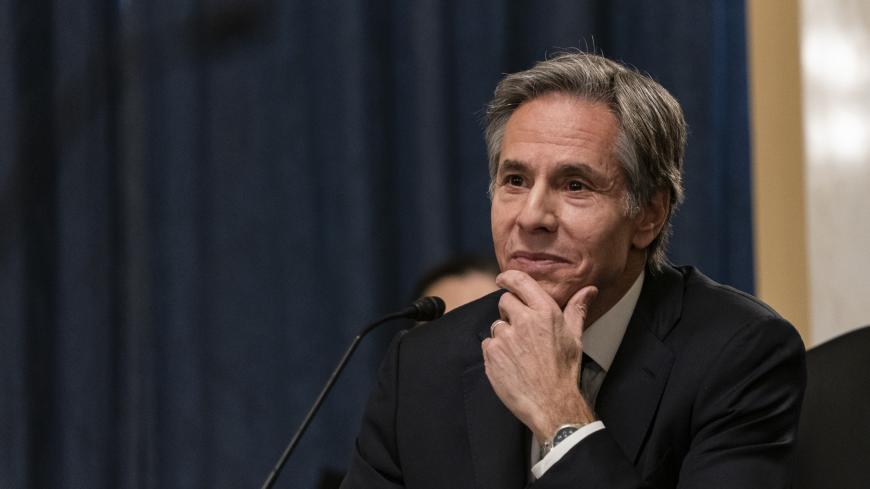 Antony Blinken speaks during his confirmation hearing to be Secretary of State before the US Senate Foreign Relations Committee on Jan. 19, 2021, in Washington. Blinken addressed some of the issues involving the Grand Ethiopian Renaissance Dam at the hearing. - Alex Edelman-Pool/Getty Images

Antony Blinken, US President Joe Biden’s nominee to be secretary of state, warned this week in his confirmation hearing that talks between Egypt, Ethiopia and Sudan on the Grand Ethiopian Renaissance Dam could "boil over."

In response to a question by Senate Foreign Relations Committee member Chris Coons, D-Del., about how the United States can better support the "fragile transition in Sudan" and hold countries in the region accountable for human rights, Blinken noted "concerning actions, including atrocities" by Ethiopian forces against Tigreans and refugees and promised a "fully engaged" American foreign policy in the region.

The Biden administration is not inheriting a cold start on Nile River and Horn of Africa diplomacy. US President Donald Trump agreed to help broker a deal between Egypt, Ethiopia and Sudan in September 2019, at the request of Egyptian President Abdel Fattah al-Sisi. Then US Treasury Secretary Steven Mnuchin worked out an agreement with the three parties and the World Bank in February 2020, but when it came time to sign, Ethiopia never showed up. Since then, mediation efforts by the African Union and South Africa have sputtered.

The stakes in the Nile dam talks couldn’t be higher for Egypt, and became more complicated, and intertwined, because of the Ethiopian civil war and its impact on Sudan. While the Nile talks have been until now been mostly a high stakes Egypt-Ethiopia diplomatic dispute, with Sudan in a supporting role (for Egypt), the Sudan-Ethiopia fault line now risks military escalation.

Nile is "life and death" for Egypt

"For Egypt, the matter of the Nile is a matter of life and death,” Egyptian Foreign Minister Sameh Shoukry said in an exclusive interview with Al-Monitor in September 2019, adding, “I don’t think anybody would agree that Ethiopian development should come at the expense of the lives of Egyptians.”

Here’s why, as we explained last year. The Blue Nile, which joins with the White Nile to form the Nile in Sudan, originates in Ethiopia. The Grand Ethiopian Renaissance Dam, which would be the largest hydroelectric power generator in the region and has been under construction since 2011, is nearing completion. The dam would satisfy the water and energy needs of Ethiopia’s 110 million people and allow Ethiopia to export power throughout the region, another boost for its economy.

Egypt is 90% desert and the Nile is the only source of water; 95% of Egypt’s estimated 100 million citizens live along the river. The Nile’s water barely meets Egypt’s needs; any reduction could be a massive hardship for Egyptians.

Egypt has suggested Ethiopia only fill the dam over 10 years, or some period of time, to assure equitable distribution and manage any technical problems of Nile water management. Ethiopia says Egypt is overstating the impact of the dam, and that seasonal and climate variations make technical commitments now impractical. For Ethiopia, the dam is a matter of sovereignty and national pride.

Sudan, the third party to the talks on the dam, has tilted toward Egypt in the talks. Khartoum also stands to gain from the dam, which could help curtail episodic flooding and provide cheaper and more accessible energy.

The outbreak of civil war in Ethiopia between the government and the Tigray People's Liberation Front in November has shaken the fragile transition in Sudan and sidelined progress on the dam talks. Sudan has 44 million people, including over 1 million refugees and nearly 2 million internally displaced persons, according to the UN refugee agency. The UNHCR reports that over 58,000 refugees have fled to Sudan from Ethiopia since November. The friction on the Sudan-Ethiopia border as a result of the war has escalated to military threats over accusations of violations of sovereignty on both sides.

The Trump administration transformed US relations with Sudan by removing it from the US terrorism list, thereby allowing Sudan to receive US and international aid and debt relief, in return for Sudan normalizing relations with Israel.

Sudan sparked the 2018-2019 popular demonstrations in the region, which spread to Algeria, Lebanon and Iraq, a kind of sequel to the Arab Spring protests of 2010/2011. In April 2019, a joint "military-civilian sovereignty council" replaced Sudanese President Omar al-Bashir, a dictator and war criminal, following demonstrations which began in December 2018. New Prime Minister Abdalla Hamdok, a 61-year-old economist, leads a transitional government of bureaucrats and old-guard military types from the Bashir days. The economy is close to collapse and political institutions in advanced decline, if they ever functioned much at all, as we explain here.

The unemployment rate in Sudan is estimated at 16% (and is probably much higher), the poverty rate 36.1% (also probably higher), and the COVID-19 pandemic has made it all worse. In 2020, Sudan’s economy is expected to contract by 8.4%, the third year in a row of negative growth; just less than 1% growth rate is expected in 2021, according to the International Monetary Fund.

Ethiopian Prime Minister Abiy Ahmed implied last month, without naming names, that Egypt is provoking or encouraging the border confrontations between Ethiopia and Sudan, which both Egypt and Sudan deny, as Khalid Hassan reports.

Nonetheless, concerns about the consequences of the Ethiopian civil war have pushed Egypt and Sudan even closer — a trend that began after the fall of Bashir. Khartoum and Cairo have expanded military cooperation, and taken a tougher stance on rejecting Ethiopia’s position on the Nile Dam talks, as Baher al-Kady reports. Egyptian General Intelligence Service Maj. Gen. Abbas Kamel was in Sudan this month to discuss coordination on recent developments, as Hagar Hosny writes. Ethiopia’s announcement of a new dam on the Agma River, north of Addis Ababa, while not impacting the Grand Ethiopian Renaissance Dam, was received poorly in Cairo, as Hosny reports here.

The risks of spillover from the Ethiopian war are high.

"Ethiopia’s fragmentation could portend displacement on a scale not seen in modern times," write Payton Knopf and Jeffrey Feltman.

The fault lines are ominous: the border disputes between Sudan and Ethiopia over the Al-Fasha, and between Ethiopia and Eritrea in Tigray; thousands more refugees; fragile economies in Sudan and Ethiopia; and consequences for Somalia and elsewhere in the region of endemic ethnic conflict.

The Biden administration has a strong diplomatic hand. The United States has close ties with all three parties to the Nile talks. If managed right, there is plenty of Nile water to share, and no one is talking about infringing on Ethiopia’s ultimate sovereignty over the Blue Nile dam. Egypt, to its credit, has so far played the Nile talks by the diplomatic book.

The United Arab Emirates, which has long-standing interests and relationships in the region, could offer an assist, even if quietly, as Ahmed Gomaa reports. Abu Dhabi’s position has been to consistently back diplomacy and de-escalation, and it has good relations with all parties. As Knopf and Feltman point out, the Ethiopian crisis, and its consequences, represent a shared interest with the Gulf Cooperation Council, as well as African allies and partners.