With Ethiopia threatening to proceed with the Grand Ethiopian Renaissance Dam’s second filling, Egypt and Sudan look for a goodwill gesture and ramp up diplomacy. 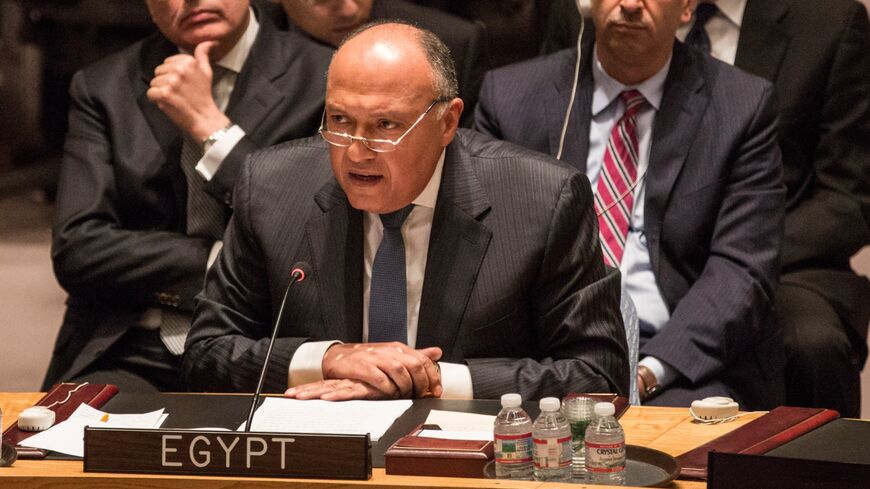 Will Egyptian Foreign Minister Sameh Shoukry be making a return trip to the UN Security Council to seek help over the Grand Ethiopian Renaissance Dam dispute? Here, Shouky attends a Security Council meeting on Feb. 18, 2015, in New York, having to do with the Islamic State in Libya. - Andrew Burton/Getty Images

During his Senate confirmation hearing in January, US Secretary of State Antony Blinken warned that the dispute between Egypt, Ethiopia and Sudan over the Grand Ethiopian Renaissance Dam could "boil over," promising that the United States would be "fully engaged" in the Horn of Africa.

The dispute has been approaching high diplomatic boil. Talks mediated by Democratic Republic of Congo President Felix Tshisekedi, the current head of the African Union, collapsed without agreement April 6.

Ethiopia declared it will go ahead with the second filling of the dam, which would diminish the waters that flow to Egypt and Sudan.

Egyptian President Abdel Fattah al-Sisi said afterward that "an Egyptian water drop shall not be messed with, because all options [are] open."

On April 13, the Egyptian Foreign Ministry sent official letters to UN Secretary-General Antonio Guterres and the Security Council regarding Egypt’s position on the dam.

The dam is a hot and sensitive nationalist topic in Ethiopia. It has the potential to make Addis Ababa a regional energy producer and exporter, allowing the supply of energy to both Ethiopia and the region.

Egypt and Sudan depend on the Nile for water and view it as an essential part of their economy and cultural heritage. They want an internationally brokered plan for water management to govern the dam to assure there is no disruption in the water flow.

Egypt's population of 100 million depends on the Nile for 95% of its water needs. Egypt’s ambassador to the United States, Motaz Zahran, warned in a recent Al-Monitor podcast that if the Nile isn’t carefully managed, there is the "potential to disrupt the livelihoods for over 150 million Egyptians and Sudanese" and "create an avalanche of socioeconomic turbulence."

The Sudanese ambassador to the United States, Nureldin Setti, told Al-Monitor that the first filling of the dam by Ethiopia last year also disrupted the Nile water flow to Sudan.

Waiting for a "goodwill gesture"

The three parties have intensified diplomatic efforts since the collapse of the Kinshasa talks.

Ethiopian Prime Minister Abiy Ahmed, who prefers to limit international mediation to just the African Union, has proposed a new round of talks led by Tshisekedi; Egypt and Sudan, however, have not taken up the Ethiopian offer, which they may see as playing for time.

Ahmed tweeted April 18, “Ahead of the 2nd filling, Ethiopia is releasing more water from last year's storage through newly completed outlets & sharing information. The next filling takes place only during heavy rainfall months of July/August, ensuring benefits in reducing floods in Sudan.”

An Egyptian government source told Ahmed Gomaa in a brief statement to Al-Monitor, “Cairo is waiting for a goodwill gesture to restart the talks given that the negotiations have failed over the past year to achieve progress on the ground.”

Egyptian Minister of Water Resources Mohammed Abdel Ati recently outlined several possible alternative water sources, including linking Lake Victoria and the Mediterranean Sea through a corridor parallel to the Nile and another to develop the Bahr al-Ghazal Basin, which is one of the Nile’s tributaries from southern Sudan, as a correspondent from Egypt reports here.

Egypt and Sudan also advanced discussions on demarcating the longstanding disputed border areas of Halayeb and Shalateen for international oil and gas investment, in what some see as perhaps in part a concession by Egypt to Sudan, as Khalid Hassan reports.

Khartoum and Cairo are seeking to pressure the Italian contracting giant Salini Impregilo, which has been involved in construction of the dam, for neglecting the potential negative impacts the dam will have on the two countries, as George Mikhail explains.

Last week, Blinken appointed veteran US and UN diplomat Jeffrey Feltman as special envoy for the Horn of Africa, noting in particular the "volatile situation in Ethiopia, including the conflict in Tigray; escalating tensions between Ethiopia and Sudan; and the dispute" over the dam.

The mix of elements at play will require significant diplomatic attention. The fighting in Tigray threatens a hot border dispute with Sudan. Sudan is already hosting 70,000 refugees from Tigray, and the numbers are growing. Sudanese forces have skirmished with Ethiopian military and militias on the border, as we explained here.

The Tigray conflict already is an irritant in US-Ethiopian ties. On April 26, Blinken told Ethiopian Prime Minister Abiy Ahmed of the United States’ "grave concern about the deteriorating humanitarian and human rights crisis in the country, including the growing risk of famine in Ethiopia’s Tigray region as well as ongoing insecurity in other parts of the country."

By contrast, US-Sudan ties have been on the fast track since Prime Minister Abdalla Hamdok came to power in 2019, and especially over the past year. On March 31, Blinken welcomed a “new chapter” in bilateral relations. Sudan’s efforts to settle accounts to get off the US terrorism list, to pursue normalization with Israel and to commit to IMF/World Bank guidance on economic reforms have allowed for a turnaround in Sudan’s foreign policy and relations with the United States.

While the Security Council may be the next step for diplomacy, there may yet be life in the Sudanese proposal for talks brokered by the United Nations, the African Union, the European Union and the United States, which Ethiopia has so for rejected. The United Arab Emirates, as a correspondent reports here, is also well-positioned to play a role, given strong ties with both Egypt and Ethiopia.

With all these moving parts, the US has a strong diplomatic hand that it has tried to play before. Then-US Treasury Secretary Steven Mnuchin worked out an agreement with the three parties and the World Bank in February 2020, but when it came time to sign, Ethiopia never showed up, as we explained here.

The US has excellent relations with all three parties, and "if managed right," we wrote, "there is plenty of Nile water to share, and no one is talking about infringing on Ethiopia’s ultimate sovereignty" of the dam.