Egypt makes case to Security Council that without an agreement, the Grand Ethiopian Renaissance Dam threatens peace and security in the region. 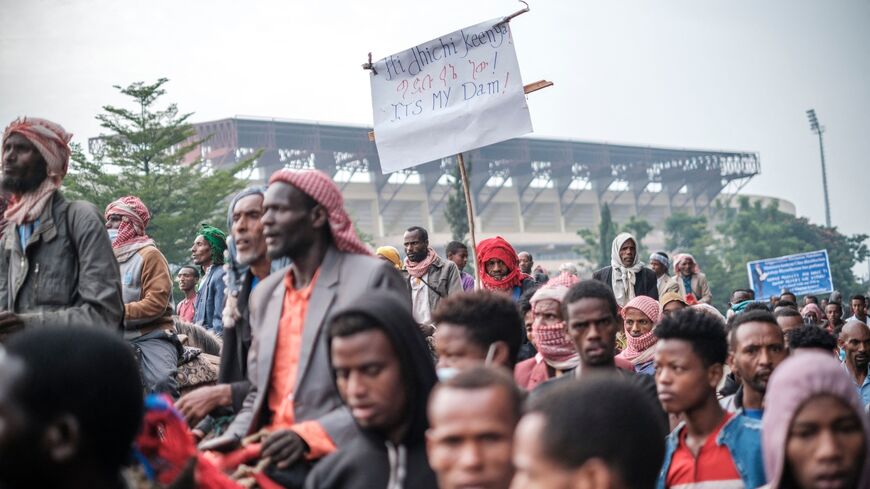 A supporter of Ethiopian Prime Minister Abiy Ahmed holds a sign making reference to the Grand Renaissance Dam as a crowd waits to enter the stadium in Jimma on June 16, 2021, for an electoral campaign rally ahead of the June 21, 2021, vote. - EDUARDO SOTERAS/AFP via Getty Images

Egypt has so far played the Nile Dam dispute with Ethiopia straight by the diplomatic book, seeking a solution via mediated negotiation, working with and through trusted partners and institutions such as the United States, the World Bank and the African Union.

Egypt depends on the Nile, which originates in Ethiopia, for more than 90% of its water needs. Ethiopia’s decision to proceed with the second filling of the Grand Ethiopian Renaissance Dam (GERD) this month, without an agreement on management of the downstream flow of the Nile waters, could reduce the flow of water to both Egypt and Sudan.

Eleven countries share water from the Nile Basin. The major chokepoint is the Blue Nile tributary in Ethiopia, where the GERD is being built.

The current crisis is not just about this month’s second filling of the dam, which may be less impactful than expected, because the GERD is still in development.

For Cairo and fellow Nile-dependent neighbor Khartoum, this is a top-tier and existential national security matter. Without an agreement on the allocation of the Nile waters, Egypt and Sudan anticipate an endless cycle of uncertainty about the flow of the vital Nile waters to their countries.

Egyptian Ambassador to the United States Motaz Zahran wrote in April, "At stake is the future of the Nile, a lifeline for millions of Egyptians and Sudanese," adding that "the GERD could inflict incalculable socioeconomic and environmental harm downstream in Egypt and Sudan."

Ethiopian Prime Minister Abiy Ahmed has rejected a mediated solution until now, including guidelines negotiated by US and World Bank mediators last year with Egyptian, Sudanese and his own officials.

Abiy has so far dug in with a hard-line nationalist approach to the GERD, saying that even technical recommendations are unwelcome infringements on Ethiopian sovereignty. Meanwhile, the government is fighting an insurgency in Tigray (more on this below).

The GERD represents a potential turnaround for Ethiopian development, with the prospect of Addis Ababa becoming a regional superpower in the production and export of hydroelectric power.

Egyptian Finance Minister Mohamed Maait said July 1 that Egypt is not opposed to the GERD or any other dam, but is rather seeking legally binding guidelines to manage the Nile’s flow of water to Egypt and other basin countries.

Ethiopia has continued to give lip service to process mediated by the African Union (AU), but that effort appears to have reached a dead end. Egypt and Sudan have backed UN, US and EU engagement in the process, along with that of the AU.

Ethiopia has attempted, via the AU, to engage Sudan in some type of interim agreement, perhaps designed to lure Sudan away from Egypt’s camp, but the back and forth between the two countries over the past weeks ended without agreement, as Mohamed Saied reports.

Egyptian Foreign Minister Sameh Shoukry, in a letter to the Security Council, wrote, “The negotiation process led by the African Union (AU) has so far proved its uselessness. … After eight months of negotiations, we are not close to signing an agreement.”

Now the government of Egyptian President Abdel Fattah al-Sisi has raised the diplomatic stakes, taking the matter again to the UN Security Council, which will meet about the GERD July 8.

Sudan has supported Egypt in approaching the Security Council, and the Arab League has backed their initiative.

This will be the second time in two years the Security Council has taken up the GERD. Egyptian officials are not threatening military force, but it has become increasingly part of the narrative around the escalating crisis, as diplomacy hits one dead end after another.

Shoukry, in his letter to the Security Council, wrote, “If we do not reach an agreement after all these efforts, we will have exhausted all the peaceful means and the extent of intransigence and absence of political will from the Ethiopian side as well as the extent of flexibility by Egypt and Sudan will be revealed to the international community.”

Back in April, after the last round of AU talks collapsed, Sisi said, "Let’s not reach the point where you [Ethiopia] touch a drop of Egypt’s water, because all options are open.”

Egypt is working to cultivate options for water sharing, as well as diplomatic support for its position on the GERD, throughout East Africa, including South Sudan and Tanzania.

South Sudan’s intention to build its own dam on the White Nile took Khartoum by surprise, as George Mikhail reports.

Cairo, for its part, is seeking to mitigate the potential crisis by engaging South Sudan in development and water-sharing projects, all the while seeking Juba’s diplomatic support in dealing with Ethiopia, as Ahmed Gomaa reports.

Egypt has also sought to work with Tanzania to develop dams and alternative water sources, and deflect interest by regional powers in signing up for the GERD’s hydropower, as a correspondent in Cairo reports.

US: Best interests of Ethiopia to have an agreement

During his confirmation hearing before the Senate Foreign Relations Committee in January, US Secretary of State Antony Blinken warned that the GERD dispute could "boil over" and promised that the Biden administration would be "fully engaged" in the Horn of Africa.

Blinken has kept his promise, appointing veteran US and UN diplomat Jeffrey Feltman as special envoy to the Horn.

Meanwhile, Abiy’s star has fallen in Washington. Gone are the accolades during his rise as a reformer when he came to office in 2018, and as a statesman, after winning the Nobel Prize in 2019 for making peace with Eritrea.

Since November 2020, Abiy has been accused of human rights violations and atrocities for Ethiopia’s conduct of the war against Tigray secessionists, which has spilled over into Sudan, linking the two crises.

It had been hoped that a good election outcome could give Abiy space to walk back some of the hard-line rhetoric on the GERD.

Meanwhile, the Biden administration, which is playing an active and discreet diplomatic role, is urging Ethiopia to reach agreement on the GERD as it monitors a unilateral cease-fire announced by Ethiopia in Tigray this week.

The United States is benefiting from the quiet mediation of the United Arab Emirates to promote a cease-fire and political solution in Tigray, and perhaps to help mediate on the Nile dispute as well.

The acting assistant secretary of state for the Bureau of African Affairs, Robert Godec, testified before the House Foreign Affairs Committee, “There are technical solutions that address all of the parties, that allow Ethiopia to build the dam and have electricity, that allow Egypt to have water, that allow Sudan to have water.”

“We believe it is ultimately in the best interests of the people of Ethiopia to have an agreement,” Godec added, as Adam Lucente reports.

The United States has longstanding and close ties with all three parties to the GERD dispute — Ethiopia, Egypt and Sudan.  All three have interests in keeping strong relations with Washington. China may dabble in GERD diplomacy, as Ahmed Gomaa reports, but the action ultimately falls to Washington.