Egypt seeks to check Turkish influence in North Africa and the Horn, while its priority remains Nile Dam talks with Ethiopia. 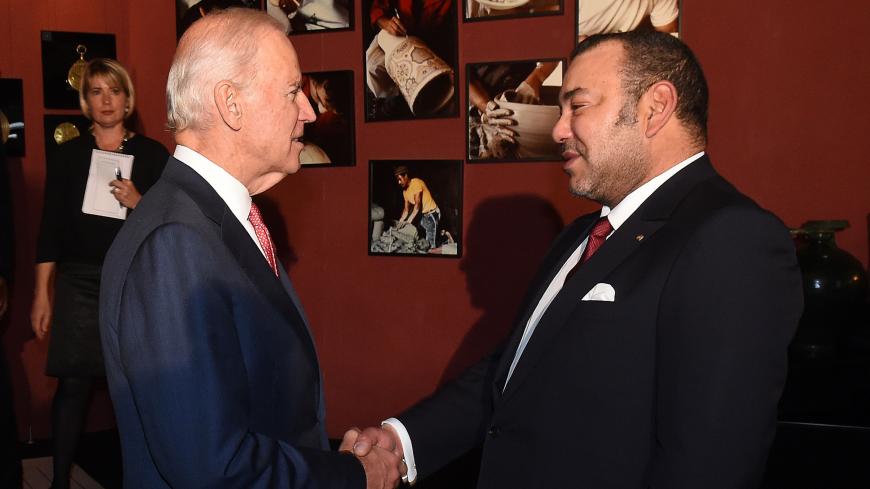 US Vice President Joe Biden (L) shakes hands with Morocco's King Mohammed VI at the royal palace in Fez on Nov. 19, 2014. Biden was attending the Global Entrepreneurship Summit in Morocco, taking place for the first time on the African continent. - FADEL SENNA/AFP via Getty Images

The incoming Joe Biden administration will find that key Middle East fault lines are increasingly present in Africa. On one side is Egypt, backed by Saudi Arabia and the United Arab Emirates. On the other is Turkey and Qatar. The fault lines include struggles for influence in Libya and Sudan, and increasingly North Africa and Western Sahara, Ethiopia and Somalia. Russia is also probing its opportunities at the expense of the United States. Here are five trends to watch:

For Egypt, there is no higher priority than reaching a satisfactory conclusion in negotiations with Ethiopia over Nile River water allocation affected by the Grand Ethiopian River Dam (GERD). Egypt depends on the Nile for more than 90% of its water needs for its 100 million citizens. Cairo wants an agreement that will assure its fair share of water once the dam is built.

For Ethiopia, the dam could reshape development for the country and the region. The dam has been woven into an Ethiopian populist, self-determination narrative. The country has rejected interference from Egypt or anyone else. The United States, the World Bank, and the African Union (AU) have all been involved in trying to broker a compromise, which would also include Sudan.

No surprise then that Egypt is watching with interest, and concern, the outbreak of civil war in Ethiopia between the government and the Tigray People's Liberation Front (TPLF).

The civil war in Ethiopia has regional implications. Thousands of refugees have already fled to Sudan. Eritrea is worried that a fragile peace brokered by Ethiopian Prime Minister Abiy Ahmed and Eritrean President Isaias Afwerki two years ago, which led to Abiy receiving the Nobel Peace Prize, could collapse, and that the civil war could lead to chronic instability and violence in Ethiopia and spread into Eritrea.

An Eritrean delegation visited Egypt last week three days after the TPLF bombed Asmara airport. Egypt and Eritrea have always had good relations, and the delegations, while being careful not discuss Ethiopia publicly, clearly discussed it privately.

Egypt is weighing the consequences of the war on the Nile Dam negotiations, as George Mikhail writes. If the conflict escalates, it could slow Ethiopia’s development of the dam. While Egyptian officials have been neutral or silent on the war, pro-government media has criticized Abiy for fueling the conflict with the TPLF, as Muhammed Magdy reports.

Yet, even amid the conflict, another round of AU-sponsored GERD negotiations took place Nov. 19. Sudan called for a new approach to the talks, which it described as "useless" in the present format. With the uncertainty surrounding the civil war in Ethiopia, Egypt has sought to deepen its political and security relations with Sudan, including to counter Turkey’s ambitions (see below).

Mohamed Saied reports that deepening Egypt-Sudan military ties are another signal to Ethiopia, as well as a further check on Turkish influence, which has been fading since the overthrow of former Sudanese president and war criminal Omar al-Bashir, who was deposed in a coup last year.

Khalid Hassan explains that Egypt is seeking to leverage ties with Sudan and Israel to counter rising Turkish influence in Somalia. Turkey views Somalia as a counterweight to the loss of Bashir for strategic influence and access to the Red Sea.

Russian naval base in Sudan signal to US, Turkey

Sudan is both a party to the GERD talks and the third country, after the Emirates and Bahrain, to normalize ties with Israel this year. The United States agreed to remove Sudan’s designation as a state sponsor of terrorism following Khartoum’s willingness to establish ties with Israel.

Sudan has also been on Russian President Vladimir Putin’s agenda. This week, Sudan agreed to allow Russia to build a naval base in Sudan. Anton Mardosov explains that the base could be a long time in the works, for a number of political, economic and logistical reasons. More broadly, however, Putin’s move is a signal to China, Turkey and the United States. China has expanded its influence through its belt-and-road initiatives in Africa. Turkey lost a friend when Bashir was deposed. Putin tends to be on the opposite side of Turkey in the Libyan conflict (more below). Russia may also seek a naval base in Libya, according to Kirill Semenov, following Sudan. And the United States, after ending the terrorist designation, thus allowing US and international economic aid to Sudan, can hardly be pleased to see Khartoum deal Russia into its network of relationships.

Despite a UN-brokered cease-fire, Qatar has agreed to sell arms and provide military to the Libyan Government of National Accord (GNA), declaring that full support for the GNA is the best means of ending the conflict, as Khalid Hassan reports.

Both Turkey and Qatar back the GNA, while Egypt, the UAE and Russia support the Libyan National Army backed by general Khalifa Hifter.

A worrying sign for the peace negotiations is that Turkish-backed Syrian jihadis in support for the GNA, and Russian Wagner group mercenaries, which serve as an informal gendarme for the Kremlin, and which back Hifter, show no signs yet of leaving, as we report here.

Turkey has managed good relations with both Algeria and Morocco, but this could all be complicated if the Western Sahara conflict heats up. Here’s why.

Morocco considers the Western Sahara as its territory, while Algeria backs the separatist Polisario Front. Most of the Arab world backs Morocco. Both the UAE and Jordan recently announced they will establish consulates in the region, boosting Morocco’s claims.

Turkey has been on Morocco’s side, and prudence should counsel keeping out of this one. But Turkish President Recep Tayyip Erdogan has a personal investment in ties with Algeria, as Pinar Tremblay reports. And Erdogan may begin to see the conflict in his broader rivalry with Saudi Arabia, the UAE, and Egypt. Turkish business in Morocco is also taking a hit because of the Saudi-led boycott of Turkish goods. A turnaround on Western Sahara may seem high risk and low gain for Ankara, but Erdogan’s ambitions in North Africa may compel him to consider a reset.