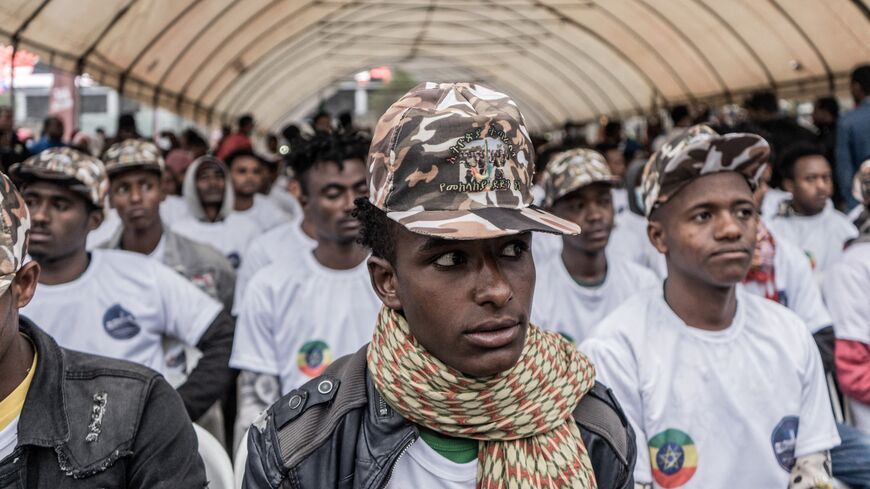 Newly recruited members of the military gather during a farewell ceremony for new recruits joining the Ethiopian military force to Tigray, organized by the mayor in Addis Ababa, Ethiopia, on July 27, 2021. - AMANUEL SILESHI/AFP via Getty Images

Back burner: The already stalled diplomacy to resolve the dispute between Egypt and Ethiopia over the Grand Ethiopian Renaissance Dam (GERD) has been subsumed by the escalation in the conflict between the Ethiopian government, backed by Eritrea, and the Tigray People’s Liberation Front (TPLF).

Latest: Ethiopian Prime Minister Abiy Ahmed called on Aug. 10 for mass enlistment to counter TPLF military advances. Last month, Abiy referred to the TPLF as a "cancer" on Ethiopian society, and to the TPLF as "weeds," adding that although "there may be arguments about the means of the Ethiopian military campaign … this will not stop us from achieving our goals," in a speech roundly criticized as inflammatory. The war began in November 2020 when Ethiopia accused the TPLF of an attack on an Ethiopian military base, which the TPLF denied. After initial successes against the TPLF, the military has lost ground in Tigray and adjoining regions of Ethiopia. Both sides have been accused of atrocities.

Ethiopia rejects Sudan mediation: Ethiopia claims Sudan, which had been attempting to mediate the Tigray conflict, is not credible because Khartoum has taken advantage of the conflict to seize Ethiopian territory. Sudan is also aligned with Egypt on the GERD dispute. Sudanese Prime Minister Abdalla Hamdok has had the support of the Biden administration to try to broker a cease-fire in his role as chair of the Intergovernmental Authority on Development IGAD (which also includes Kenya, Ethiopia, Uganda, Djibouti, Sudan, Uganda and Somalia). Mohamed Saied reports here on the breakdown in Sudan-Ethiopia ties over Tigray. Sudan has received 78,000 refugees from the Tigray region.

"Existential threat" on hold. Last month Egypt appealed to the UN Security Council to elevate the stalled talks on the GERD dispute, as we reported here. Foreign Minister Sameh Shoukry called the possibility of the GERD affecting water flow to Egypt an "existential threat" that Egypt "will not tolerate." The Security Council heard Egypt’s case, but kicked diplomacy backed to the African Union, where talks have been stalled for over a year.

Advantage Egypt? In the eyes of Washington and the West, the gloss is off Abiy, who won the Nobel Peace Prize in 2019 for making peace with Eritrean President Isaias Afwerki. For Egyptian President Abdel Fattah al-Sisi, the Tigray conflict complicates conflict resolution on the Nile dam dispute and foments regional instability, both of which are not in Cairo’s interest. Despite some tough talk over the past year, neither Cairo nor Addis Ababa wants a military escalation — especially Abiy, with Ethiopia bogged down and accused of atrocities in a terrible civil war. Egypt, which has stayed clear of the Tigray conflict until now, could make life even harder for Abiy with any number of low-cost moves. Samuel Ramani, an expert on Africa at Oxford University, told Al-Monitor that Egypt instead hopes that "attritional damage to Ethiopia's reputation from Tigray might benefit it in the long run," with regard to Nile Dam diplomacy.

Read more: Sam Ramani writes here about the mediation efforts of the UAE, which maintains good ties with both Ethiopia and Egypt; Mohamed Sabry writes here about Russian diplomacy on the Nile Dam; and Mohammad Hanafi has the scoop on Nile Dam crocodiles showing up in Khartoum (see below).

Herzog was a guest on Al-Monitor’s “On Israel” podcast in November 2020, during which he predicted the Biden administration would maintain strong ties with Israel despite pressure from the Democratic Party’s progressive wing. Take a listen here.

The wildfires raging in Turkey are threatening not only the environment, but President Recep Tayyip Erdogan’s approval rating. The Turkish government was ill-prepared to take on the fires, which in recent weeks have engulfed pine forests, agricultural land and homes across the country’s southern coast.

“The disaster laid bare how Turkey had been left without any working firefighting planes of its own and had to lease foreign ones as its existing aircraft lay idle, grounded by lack of maintenance,” writes Metin Gurcan. Not only was Ankara caught off guard by the fires, but as Cengiz Candar explains, conspiracy theories and staunch nationalism paralyzed the government’s initial response.

Plus, Andrew Wilks has the story on a Turkish prosecutor’s investigation into whether social media helped stoke fear over the fires. Nazlan Ertan reports on how the environmental disaster has delivered a fresh blow to Turkey’s pandemic-ravaged tourism sector.

Sudanese officials have warned citizens against swimming in the Nile River after an increasing number of crocodiles and snakes were spotted in the waters near Khartoum. Some are blaming the surge in cold-blooded predators on Addis Ababa’s second filling of the GERD and the resulting change in Nile water levels, writes Mohammad Hanafi. Meanwhile in neighboring Egypt, reports of a crocodile sighting in the northern village of Zefta have sparked concerns that the reptiles have made their way downstream.

Egyptian President Abdel Fattah al-Sisi stirred controversy last week when he called for an increase in the price of subsidized bread. The proposed price hike, which would help offset the cost of school meals, was seen by supporters “as a wise and timely decision, while critics condemned it as the last straw,” writes Shahira Amin.

Subsidized bread, which is provided to some 60 million people across the North African country, has remained unchanged for decades. Soaring food prices were among the reasons anti-government protesters took to the streets in 2011. Protests erupted again in 2017 when Cairo announced plans to cut bread subsidies.

A decade after his disappearance, Seif al-Islam Gadhafi has announced his planned return to Libyan politics. The son of the late Libyan dictator Moammar Gadhafi was captured during the NATO-backed uprising in 2011, and has been hiding out in the northwestern city of Zintan since his release from prison two years ago. The 49-year-old told The New York Times Magazine that he is planning a return to political life and hopes “to restore the lost unity" of his country. Gadhafi has some support across Libya and there’s talk of him running in the December presidential elections. But as Khalid Hassan points out, an International Criminal Court warrant for his arrest may get in the way of his political ambitions.

One Cool Thing: US hands over looted Iraqi artifacts

Some 17,000 ancient artifacts smuggled out of Iraq have been returned to the country, in what Baghdad describes as its largest-ever repatriation of looted treasures. As Adnan Abu Zeed explains, an untold number of antiquities were looted from Iraq’s museums amid the American invasion in 2003 and during the Islamic State’s control of Iraqi territory between 2014 and 2017.

Many of those artifacts ended up in the possession of US arts-and-crafts chain Hobby Lobby, which later agreed to forfeit them as part of a 2017 settlement with the Justice Department. Hobby Lobby’s collection included the 3,500-year-old clay "Gilgamesh Dream Tablet," which until recently was on display at the Museum of the Bible in Washington.

The World Bank announced its new Country Partnership Framework for Iraq, outlining measures to help the Middle East country cope with the twin shocks of volatile oil prices and the coronavirus pandemic. Iraq’s gross domestic product in 2020 contracted by 10.4%, adding to existing public grievances over the economy. The bank will focus on implementing protections for Iraq’s poor and vulnerable until the election of a new government in October, before turning its attention to medium-term reforms aimed at diversifying the Iraqi economy. Read more about the partnership here.

President Kais Saied’s supporters aren’t disputing the fact that he orchestrated an executive power grab, but they nonetheless consider him “a desperately needed savior” who can deliver a necessary shock to Tunisia’s political system. Tunisia expert Monica Marks explains how Saeid capitalized on the Tunisian protest movement to launch what his critics describe as a coup. “It seems that nobody wants to work with him,” Marks says of Saeid’s failure to name a replacement prime minister. Listen to Amberin Zaman’s interview with Marks in this week’s On The Middle East podcast.

Hossein Amir-Abdollahian, announced Wednesday as Iran’s next foreign minister, laid out his approach to the Syria crisis in a 2014 article for Al-Monitor. Amir-Abdollahian, who was then serving as deputy Iranian foreign minister for Arab and African Affairs, described humanitarian aid to the war-torn country as “a religious and humanitarian duty” and said “reinforcing the political track and facilitating comprehensive talks is the most appropriate method to achieve a political solution” in Syria. You can read the article here.