The Takeaway: US, Israel to show united front on Iran during Biden visit 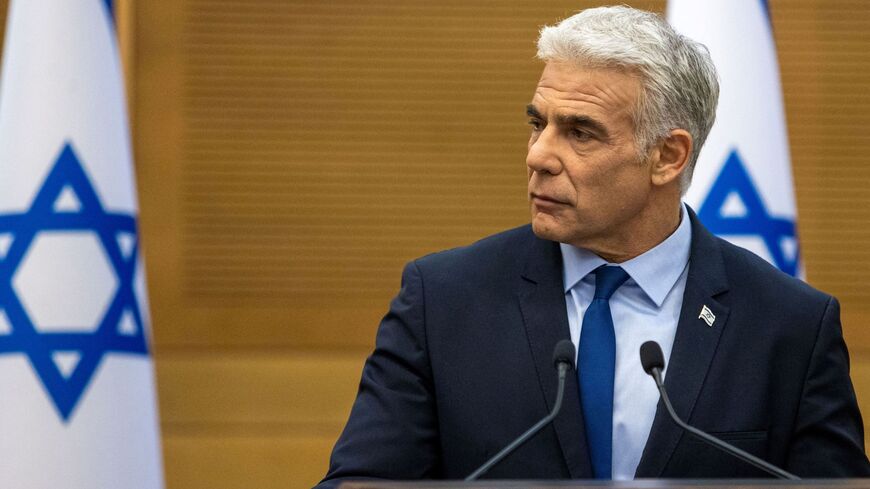 Israel's Foreign Minister Yair Lapid listens during a a joint statement to the press with Prime Minister Naftali Bennett (unseen) in Jerusalem on June 20, 2022. - OREN BEN HAKOON/AFP via Getty Images

Our take: Biden visit could benefit Lapid in possible fall showdown with Netanyahu

Israel is headed to its fifth election in just over three years after the collapse of its fragile coalition government. Prime Minister Naftali Bennett’s surprise decision to step down and disband the Knesset comes weeks before he is due to meet with President Joe Biden, who arrives in Israel on July 13.

As we report below, the collapse of the coalition sets the stage for a possible return of Israel’s longest-serving prime minister — Benjamin Netanyahu, now the Likud Party opposition leader in the Knesset, whom the Bennett-led coalition ousted from power a year ago.

The conventional wisdom is that the coming election may be a showdown between Netanyahu and Bennett’s outgoing coalition partner, current Foreign Minister (and soon to be interim Prime Minister), Yair Lapid, head of the centrist There is a Future (Yesh Atid) Party, as Mazal Mualem reports.

We asked five experts how Biden’s first presidential trip to Israel could impact politics there:

1. Netanyahu’s path back to power

The upcoming elections pave the way for longtime premier-turned-opposition leader Benjamin Netanyahu to return to power if he can mobilize the 61-seat parliamentary majority that escaped him in the previous four election cycles. Ben Caspit writes that Netanyahu’s overarching goal is to put an end to the corruption trial against him that is currently underway.  Doing so would involve the Knesset replacing the incumbent attorney general and then passing the so-called French Law suspending criminal proceedings against incumbent heads of state.

“If Netanyahu mobilizes the 61-seat Knesset majority that has evaded him through the four previous election cycles," writes Caspit, "he will probably try to carry out a constitutional, legal and regime coup. His overarching goal is to stop the corruption trial underway against him, which includes a charge of bribery."

“While the members of the Joint List are celebrating the decision by the coalition’s leaders to dissolve the Knesset, their Ra’am party rivals are trying to relay a sense that everything is business as usual,” writes Afif Abu Much. Ra’am — the first Arab party to join a ruling coalition since Israel’s founding — spent the last few weeks in talks with recalcitrant Arab members of the coalition in an effort to end the current crisis.  Ra’am chief Mansour Abbas has dismissed the notion of his party returning to the Joint List, telling Israel’s Channel 12 that “we want to be partners in the next coalition.”

3. No breakthrough in Turkey talks on NATO bids

Turkey showed no signs of abandoning its maximalist position in talks with Finland and Sweden that were held in Brussels on Monday, sources told Amberin Zaman. Turkey is threatening to veto the Nordic countries’ NATO applications unless both countries take steps to address its security concerns. Specifically, Turkish officials are insisting that Sweden and Finland end their support to the Kurdish People’s Protection Units in northern Syria, the sources said. Ankara is also demanding the extradition of several followers of Fetullah Gulen, who the Turkish government accuses of masterminding the attempted coup in 2016. The spokesperson for the Turkish presidency, Ibrahim Kalin, said the discussions on NATO membership would continue and that next week’s NATO summit in Madrid is not a deadline.

4. Can US, Iran seal the nuclear pact?

Prospects for a revived nuclear deal don’t look good, but that doesn’t mean diplomacy is dead. Ali Hashem and Elizabeth Hagedorn examine whether the United States and Iran are prepared to make tough concessions to take the deal across the finish line. “It’s very obvious that we are talking two different languages,” an Iranian official said. The talks broke down in March over Tehran’s insistence that the Biden administration delist the Islamic Revolutionary Guard Corps as a foreign terrorist organization. But in an interview with Al-Monitor, an advisor to the Iranian negotiating team indicated that that point may no longer be a red line.

Ethiopia is calling for Sudan and Egypt to return to the negotiating table, but its downstream neighbors remain unconvinced that Addis Ababa is serious about restarting the long-stalled talks. Earlier this month, Ethiopia’s Ambassador to the United States Seleshi Bekele expressed his country’s interest in resuming the African Union-led tripartite talks over the Grand Ethiopian Renaissance Dam, a multibillion-dollar hydropower plant on the Blue Nile River that Egypt and Sudan fear will impact their water supply. But as Ayah Aman reports, Bekele’s call for dialogue appears to have fallen on deaf ears. Ethiopia is preparing to complete the third filling of the dam’s reservoir next month, and an Egyptian diplomatic source said Cairo has yet to receive any substantive proposal to restart negotiations.