​Familiar problems for Biden in Israel

The US is concerned about Israeli settlement policies, recent actions toward the Palestinians, and trade with China, but these issues are more likely to blow over than blow up. 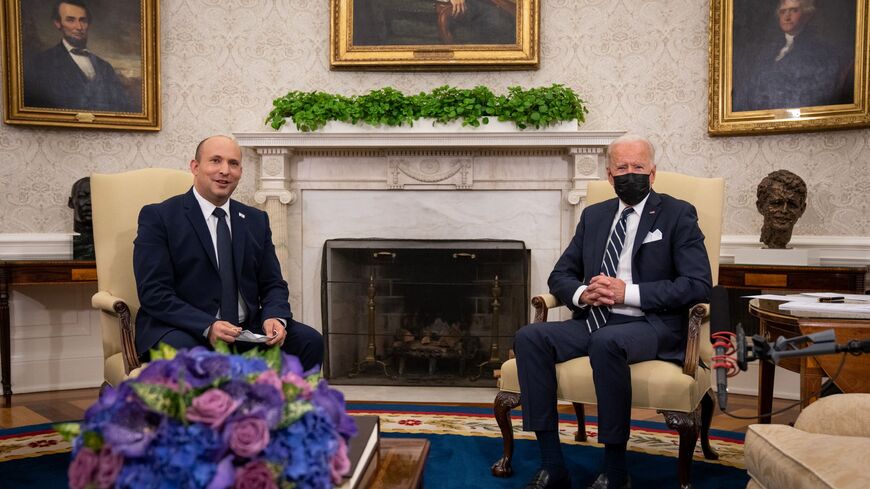 US President Joe Biden may be having some déjà vu, as settlements have re-emerged as a source of friction in US-Israel ties.

It wasn’t supposed to be like this, with Israeli Prime Minister Benjamin Netanyahu gone. Netanyahu’s successor, Naftali Bennett, doesn’t carry the same baggage as Bibi, who alienated many Democrats by going all-in with US President Donald Trump and the Republicans.

But Bennett is as much, or more, of a believer in settlements as Netanyahu. And his decision this week to proceed with more of them in the West Bank has rattled not only the Biden Administration, but also some members of Israel’s fragile coalition government with a key government vote coming up.

2010: ‘The Americans were incandescent’

In March 2010, US President Barack Obama dispatched Biden, his vice president on a “goodwill mission” to Israel.

For Obama, settlements were the first order of business in getting an Israeli-Palestinian peace process moving. UN Security Council Resolution 242, which passed unanimously in 1967 following Israel’s occupation of the West Bank, Gaza, and East Jerusalem following Israel’s Six-Day War against its Arab neighbors, calls for the “withdrawal of Israeli armed forces from territories occupied in the recent conflict,” the “land for peace” concept that has informed the peace process since that time.

Upon taking office in 2009, Obama called for Israel to halt settlements in the West Bank as a means to get Netanyahu and Palestinian President Mahmoud Abbas to start talking again. Obama writes in A Promised Land that he thought “it was reasonable to ask the stronger party [Israel] to take a bigger first step in the direction of peace.”

Netanyahu did not find it reasonable. His reaction, Obama recalls, was “sharply negative.”

So Biden arrived in Jerusalem in March 2010 to try to smooth the scratchy relationship between his boss and Bibi and resurrect stalled Israeli-Palestinian diplomacy. Biden was an old friend of Netanyahu and a passionate believer in, and advocate for, the US-Israel relationship.

During the trip, Israel’s Interior Ministry confirmed plans for new homes in a Jewish neighborhood in East Jerusalem. Although the Obama Administration had only called for a settlement freeze in the West Bank, and not Jerusalem, the announcement “was a targeted killing of all efforts to renew negotiations, and a painful humiliation” for Biden, as Ben Caspit writes in The Netanyahu Years. “The Americans were incandescent.”

Secretary of State Hillary Clinton recalls in Hard Choices that she told Netanyahu that Obama took the announcement as a “personal insult.” Netanyahu said the timing of the announcement was unintentional — but he stuck by the Jerusalem settlement plan nonetheless.

2021: Tough call for Blinken and Gantz

The friction of the Obama-Netanyahu relationship gave way to the genuine bonhomie between Bibi and Trump. The Trump years were a windfall for Netanyahu — moving the US Embassy to Jerusalem, recognition of Israeli sovereignty on the Golan, ditching the Iran nuclear deal, closing the PLO office in Washington, and brokering normalization agreements for Israel with the UAE, Bahrain, Morocco, and Sudan. And Trump did not pressure Israel on settlements.

While Biden was prepared to work with Netanyahu, there was relief when Bennett came to office in June. Meanwhile, US-Israel comity and coordination, throughout all levels of both governments, remained as strong as ever.

But settlements are now back as a first-class irritant. Last week Israel announced plans for 3,200 new housing units in West Bank settlements. The decision sparked concern from the State Department and, reportedly, an angry call from US Secretary of State Anthony Blinken to Defense Minister Benny Gantz on Oct. 26.

“Blinken’s call to Gantz was described by associates of the defense minister as unpleasant, and by Bennett associates as furious,” writes Caspit.

The friction between Washington and Jerusalem is two-way. Bennett and his coalition partner, Foreign Minister and Alternative PM Yair Lapid, also have their beef with the Biden Administration’s decision to press ahead with the re-opening of an Israeli consulate in Jerusalem as unnecessary and poorly timed (see below).

And let’s not forget China. The Biden Administration has raised concerns about Chinese investment in sensitive infrastructure at Israel’s new port in Haifa. But Israel is far from making a “choice” between Washington and Beijing, as Danny Zaken explains, given its close bonds with the US. So this issue too will remain in the realm of the manageable.

“Every honeymoon, successful though it may be, comes to an end,” writes Caspit. “This is what Israel’s newbie premier is discovering these days at particularly inopportune timing, just days before the crucial Knesset vote on the state budget, which will make or break his government.”

“While the crisis with the United States was to be expected given the deep disagreements between the sides,” Caspit continues, “its intensity and timing set off reverberations in both the political and diplomatic arenas.”

The budget legislation to be voted upon by the Israeli Knesset, or parliament, is considered a key vote of confidence in Israel’s disparate and narrow coalition government, which can’t suffer defections from either the right or left, having come to office through a 60-59 vote in the 120-member Knesset (one United Arab List MK abstained).

A positive sign  is the agreement Oct. 24 on the economic development five-year plan for the Arab communities, which includes the mark of Mansour Abbas, head of the United Arab List, as Afif Abu Much reports.

Settlements and standing up the US on a Jerusalem consulate play well with the Israeli right. Netanyahu, as head of both the Likud Party (which has 30 seats) and the Knesset opposition, works day and night to break off members of Bennett’s right wing Yamina Party (seven seats) which, as Mazal Mualem reports, is “torn apart internally over its decision to enter a government with several parties on the left, not to mention the Arab Ra’am Party (or United Arab List, with four seats).”

And on the left, Bennett’s decision to go ahead with West Bank settlement plans has left MKs from Labor (seven seats) and Meretz (six seats) “torn between keeping the coalition intact and upholding their political and diplomatic worldview, core principles that are being trampled right in front of them,” Mualem writes.

And they all seem to agree on one thing …

The “real strategic threat” for Biden, Bennett, Lapid and the Israeli left, according to Caspit, is the possible return of Netanyahu. That is what brought the Bennett-Lapid coalition members together and a kind of quiet understanding with Washington.

On Lapid's latest Washington visit, on Oct. 12-14, in discussing the consulate reopening, he told his hosts that “If you insist on this now, you are bringing back Netanyahu," writes Caspit. "None of the president’s associates wants such an outcome. Officials in Jerusalem identify the State Department as the toughest nut in the administration to crack, while viewing the National Security Council and the White House as more attentive to Bennett’s coalition woes. If the Knesset approves the budget next week, providing the government with a measure of stability, Bennett, Lapid and Gantz will have to come up with a plan to bolster trust with Washington — assuming they are able to do so first among themselves.”