With Israel advancing the construction of 3,200 housing units in West Bank settlements, it seems that the honeymoon between Israeli Prime Minister Naftali Bennett and US President Joe Biden is over. 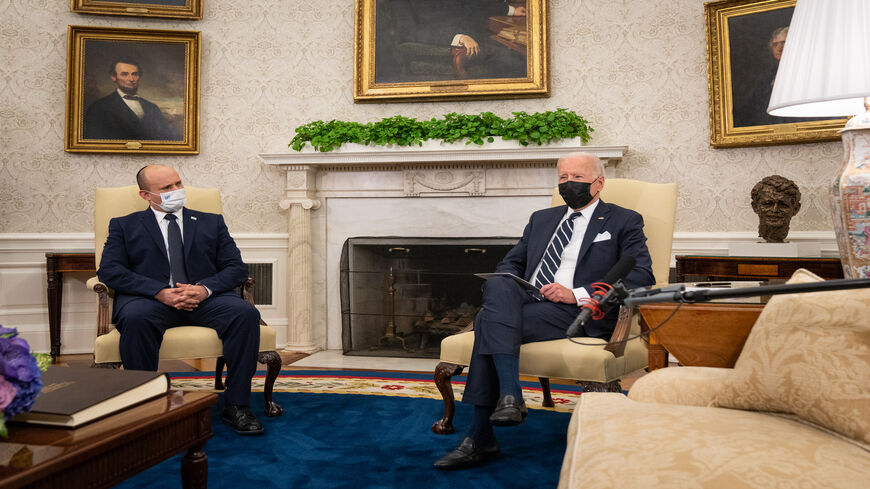 Israeli Prime Minister Naftali Bennett made a difficult decision this week. His government was about to advance plans for the construction of nearly 3,200 housing units in West Bank settlements. The Biden administration was furious, far more so than Israel had anticipated, and as reflected in an angry Oct. 26 phone conversation between US Secretary of State Antony Blinken and Defense Minister Benny Gantz. And then, as if on cue, an opportunity arose for Bennett to douse the flames: A strike broke out at the offices of the Civil Administration, casting doubt on prospects of convening its Supreme Planning Council charged with approving construction in the settlements.

Bennett deliberated for several hours, and then instructed his Chief of Staff Tal Gan-Zvi to do whatever it took to end the strike so that the council could convene. It worked. The council met and advanced the plans for the housing units, many of which had already been given initial green light under the government of former Prime Minister Benjamin Netanyahu. Bennett did not blink. Next week, his government will approve the construction of over 1,000 housing units for Palestinians in the Israeli-controlled Area C of the West Bank in order to maintain the fragile balance between the two halves of his complex coalition — the right-wing pro-settlement parties and the center-left settlement opponents. Despite US pressure and the high-level protest, Bennett walked into the storm with his head held high and emerged in one piece.

Every honeymoon, successful though it may be, comes to an end. This is what Israel’s newbie premier is discovering these days at particularly inopportune timing, just days before the crucial Knesset vote on the state budget, which will make or break his government. Israeli legislation considers the vote on the budget as a vote of confidence in the government.

While the crisis with the United States was to be expected, given the deep disagreements between the sides, its intensity and timing set off reverberations in both the political and diplomatic arenas. “None of us had any illusions,” a senior Israeli diplomatic source told Al-Monitor on condition of anonymity. “The Biden administration is not the Trump administration. Under [former President Donald] Trump, the chief lobbyist for construction in the settlements was Trump’s Ambassador [to Israel] David Friedman. That’s in the past. The current administration views settlements as an obstacle to peace. Period. That is their position in principle. They have to accept our constraints and we have to recognize theirs.”

Blinken’s call to Gantz was described by associates of the defense minister as unpleasant, and by Bennett associates as furious. It followed the US condemnation just days earlier of Gantz’s announcement designating six Palestinian organizations and institutions as terrorist organizations operating under the guise of human rights groups, an announcement that set off a major political storm in Israel and beyond. The backdrop for both developments is yet another sticking point between the sides — the administration’s continued insistence on making good on its campaign promise of reopening a consulate in Jerusalem to serve the city’s Palestinian residents. These back-to-back events brought the honeymoon between the new administrations in Washington and Jerusalem to a resounding end.

“Despite the disagreements, we are maintaining discretion and we are determined to iron out issues behind closed doors and to maintain each other’s dignity,” a senior Israeli political source told Al-Monitor on condition of anonymity. Asked why the Americans were so furious when they are well aware of Bennett’s settlement expansion views, the source replied, “It’s a matter of timing and mass.” The Americans, he added, insist on checking in detail every planned housing unit, and they are particularly angry about construction in settlements deep in the West Bank. “Anything that threatens the future of the two-state solution sets off vibrations that also affect us,” he said.

A very senior diplomatic source in Jerusalem concedes that while disagreements between the sides exist, “there is also trust, transparency and cooperation. Both sides are careful not to go over the top or test each other’s limits.” According to the source, who spoke on condition of anonymity, during the preparatory meetings ahead of Bennett’s September meeting with President Joe Biden, the Israelis made it clear that the new government would not annex any territory but would also reject any freeze on construction within the settlements. “We will have to be more attentive and a little less 'greedy' on this issue down the line. Approval of housing units at this time is intended to help the government push through the budget, and it was no coincidence that right afterward we approved Palestinian construction in Area C for the first time in years,” he said.

Is this the end of the promising first chapter in relations between the sides, and particularly between Biden and Bennett? Some of the Americans are pessimistic on this question. “There are initial indications of disrespect for the president in at least three incidents,” a Western diplomatic source told Al-Monitor on condition of anonymity. “You cannot promise at a meeting with the president to ‘limit the conflict’ and ‘strengthen the Palestinian Authority’ and then do the exact opposite,” he said. In response to a question, the diplomat added, “The steps taken to keep these promises were minor, whereas the steps threatening them are far more substantive.”

According to the diplomat, Biden had listened attentively to Bennett’s lengthy explanation about the need for balance in his fragile coalition, but “de facto, he sees mainly measures that favor the right. In addition, no one is discounting his coalition constraints, especially after the approval of an additional $1 billion for Iron Dome. We would have expected more Israeli understanding on the consulate issue.”

Nonetheless, the crisis is likely to pass. What unites Washington and Jerusalem appears stronger than what divides them. The true test will come the morning after the budget is approved. Are the Americans preparing to retaliate in order to tame the Israeli coalition and demonstrate the limits of US patience? Probably not. The domestic challenges facing Biden will make it difficult for him to open yet another front, which is apparently far less crucial for him. What's more, the real strategic threat continues to hover over him, as it does over Bennett and Lapid. Its name is opposition head Benjamin Netanyahu.

That was the main argument raised by Foreign Minister Yair Lapid on his latest Washington visit, on Oct. 12-14, in discussing the consulate reopening, which the political right views as an infringement of Israeli sovereignty over Jerusalem. If you insist on this now, you are bringing back Netanyahu, Lapid reportedly told his hosts. None of the president’s associates wants such an outcome. Officials in Jerusalem identify the State Department as the toughest nut in the administration to crack, while viewing the National Security Council and the White House as more attentive to Bennett’s coalition woes. If the Knesset approves the budget next week, providing the government with a measure of stability, Bennett, Lapid and Gantz will have to come up with a plan to bolster trust with Washington — assuming they are able to do so first among themselves.